you know Luft '46
http://www.luft46.com/
over proposed aircraft project during WW2

but is there a similar webpage over proposed project during WW1 ?

Never seen nothing about Luft 19 but would be great to do it?

pometablava said:
Never seen nothing about Luft 19 but would be great to do it?
Giant bombers, advanced zeppelin, Junkers advanced tactical aircraft....
Click to expand...

why not ?
I am curious about those Projects

maybe the Kaiser lacks the "coolness" of certain people in the 40ies . Don't take me wrong , I respect German aeronautical achievements , am a fan of Luft 46 projects , been at that site for hours and would truely avoid labelling anyone in political terms ,especially those labour to bring out some of the most interesting concepts to limelight , but I believe the stress on these projects or WW2 German books , models etc , ie the "market desire" is political indeed and supply follows demand .
J

IMHO, one of the factors in the number of unbuilt projects in the 1910-1920 decade was the speed with which projects evolved into hardware. Thus, the space between napkin backs to wood, wire, fabric, etc. was compressed. The complete life cycle of many designs could be measured in weeks.

The Luftwaffe '46 comicx touched on it briefly. There was a WWI German carrier based I think on the Emden, with Junkers J.1s

"maybe the Kaiser lacks the "coolness" of certain people in the 40ies ."

Hm, don't know about that, just have a look a the drawing and decide for yourself ... ;D

I think, it's mainly the "the "market desire", which boosts the number of books about
german WW II projects. And most WW I projects just don't look "cool" enough for the
eyes of most readers today. Have a look at the late Messerschmitt or Lippisch or other
WW II designs, they have at least a modern touch, even for us today, but WW I types ?
Even the most modern types of this era are looking just antiquated today and probably
not very different from a Fokker E.III for most people. And most books about aircraft aren't
aiming at the specialist, but at people, whith just a fleeting interest in aviation, who cannot tell
a Sopwith Pup from a Nieuport 28. So, jets and fast looking aircraft are much better and
if there's a spirit of a dark era, it's even better. Another historical example perhaps are books
about medieval times, against the times of, say, the baroque . Which book will be easier to sell ?
The one with a musketeer on the front cover, or the other, with the knight in armour, shield
and sword in his hands ?
You can make a test for yourself : If you are visited by someone, who's not an aviation fan, try
to bring him up to your bookshelf and make him somewhat interested in your books. What's the
book, he'll have a closer look at ?
WARNING : Many of us probably are in danger, to be regarded as militarists after this test ! :

It would be so cool to see all giant Zeppelin bombers and airships and all-metal fighters hurtling across the skies.
It would be also nice to see it on Internet (especially if supported by good drawings...).
J

in the following urls

I have also found a drawing by Pye Palm representing a RAF SE4 with bubble canopy
Click to expand...

interesting...compare with this image from putnams 'royal aircraft factory', page 279,

I usually am in agreement with Jemiba opinion but I am afraid on this one I disagree.
My library does not just cover aircraft subjects and is visited by several people who are not knowledgeable on this subject.
I have observed that the aircrafts books these visitors prefere to leaf are those on the WWI, perhaps due to the eye-catching colour schemes in the German fighters.
It is unfair to identify a moustache guy with an specific political option. As an example, the actor Charles Chaplin was born the same year than Hitler and showed a very similar moustache.
As for the Kaiser moustache, it was also depicted on Werner Voss airplane.....

I have also found a drawing by Pye Palm representing a RAF SE4 with bubble canopy
Click to expand...

interesting...compare with this image from putnams 'royal aircraft factory', page 279,

The author, Pye Palm, sent me the drawing some years ago. I did not know it was published.

The author, Pye Palm, sent me the drawing some years ago. I did not know it was published.
Click to expand...

The published drawing is different, apart from having no canopy, the front view shows a different shape to the engine cowl, also the drawing number is different, 890609, as opposed to 890616. i'm assuming the one you have was prepared for publication, but for editorial/production reasons, the other one was preferred.

moustaches aside the replies have shown that there is a possibility of the birth of a proper site that will deal with it . I hope it will become reality but will deal with eveybody , not specialising on one country .I would follow it for one.

Before creating Luft'46 the autors created the 'Tiger of Terra' story. It's Science fiction, but with an alternative history too. Maybe they had some WW1 planes projects in this story.
Those books were not available in France (i found some Luft'46, but only for a few time). Maybe people who know Tiger of Terra can answer...

You can maybe find something here :

Any way the Poll (Mannesman) Giant would fall into this category?

Here's a link to a discusion on the Giant

Now this is cool.
i think you guys might be in for a treat, coz i have been working the idea for a graphic novel of this subject for a few years on and off!
Its simply called "1920"
the "great war" is still going on, the germans have developed "the leviathans" ...huge airships and i mean huge!. and the allies/Britain have developed an early form of AAMissiles!
alot of the aircraft involved are mainly more advanced versions of the junkers, dornier, metal aircarft, but the majority of the aircraft featured, are pretty familliar. i try to keep alot of fact in it and try to make the weapons and stuff seem "possible".
It seems with this subject you can be a bit more creative, even more so than a luft46 style subject.
ill post some scanned sketches and stuff up, when i get used to this scanner thing!.

The "Tigers of Terra" was actually the creation of Ted Nomura. He put out his first comic "Tigers of Terra: Families of Altered Wars" under his own label back in the late 1980s. Eventually, Antarctic Press, a comic publisher in San Antonio, TX picked up Ted's work, having released his subsequent comics such as "Luftwaffe:1946", "World War 2:1946", "Kamikaze:1946", and many others, including continuing his "Tigers of Terra" books.

His original comics are exceedingly rare to obtain given the small print runs. I know "Luftwaffe:1946", at least the initial issues, are also pretty hard to come by.

Not sure if AP ships overseas, but you can check them out at http://www.antarctic-press.com.


Deltafan said:
Before creating Luft'46 the autors created the 'Tiger of Terra' story. It's Science fiction, but with an alternative history too. Maybe they had some WW1 planes projects in this story.
Those books were not available in France (i found some Luft'46, but only for a few time). Maybe people who know Tiger of Terra can answer...
Click to expand...

Michel Van said:
but is there a similar webpage over proposed project during WW1 ?
Click to expand...

That was sort of my idea for creating Alternate Wars -- originally I wanted something like www.raf46.com, etc to showcase RAF '46, VVS '46, and USAAF '46 as a counterpoint to Luft '46. I then realized that if I just named it "Alternate Wars"; I could cover a whole breadth of stuff; not just World War II stuff.

hey , moonbat , heres a study i did for the giant mannesmann poll for my comic,
its only a crappy scetch, and its a bit innacurate here and there, but it was only a quickie.
thought youd like it.

thanks for the compliment.
;D 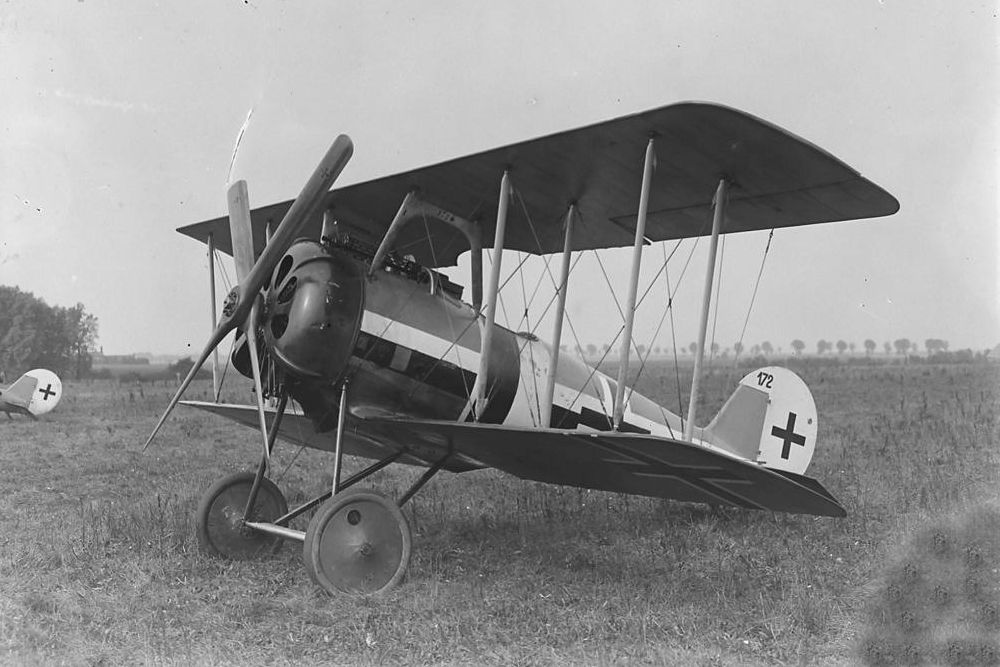 Pfalz D.VIII: On a hyperbolic trance.

The D.VIII was produced by the Pfalz company near the very end of WW1 as one of their latest and greatest fighter aircraft. With their usual tradition of fine workmanship, it had a lovely streamlin…

More on the last here: https://www.secretprojects.co.uk/threads/mannesmann-poll-triplane.10938/

Thanks for adding that, should have put it in myself.

I think as Luft 46' was characterized by swept-wing jet and rocket powered aircraft or unusually configured aircraft for VTOL flight, I think that the Luft 19' aircraft may be characterized as all metal aircraft, some monoplane designs of cantilever and parasol arrangement, some as short span bi-planes for high roll rates, for the fighters and large behemoth multi-engine multi-plane (i.e. two, three, and for winged) bombers (https://www.secretprojects.co.uk/attachments/ilvz0lzjw1xwihdy_of2cxjjbc87l-r92hacemg3lsg-jpg.624499/).

Central Powers aircraft designers whose designs can be found in the early 1920's, such as Fokkers metal trimotor monoplanes, Dornier's monoplane metal aircraft and seaplanes, and Junkers enclosed cockpit all-metal monoplanes, would be a good indication of the direction the German aircraft industry was headed in during 1919. 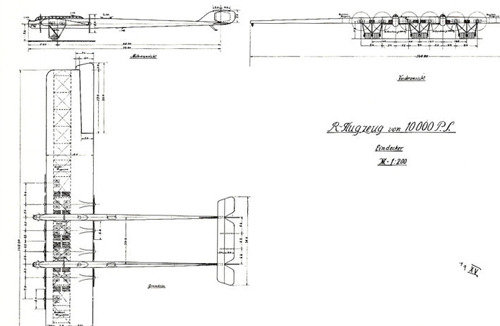 Interesting weapons for Luft 19 would be unguided rail launched rockets for ground attack, flame thrower from the air (German Patent No. 325694 for the Bunge Aircraft Flamethrower in WWI), gas attacks from the air, and a wire controlled guided 'torpedo' glider (Siemens-Schuckert R VIII's aerial torpedo depicted below). 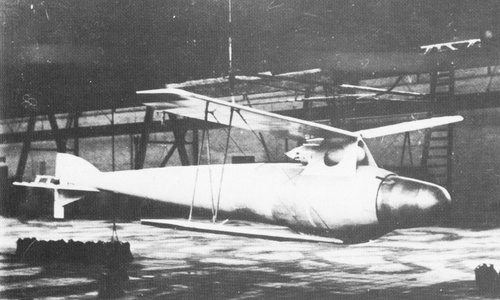 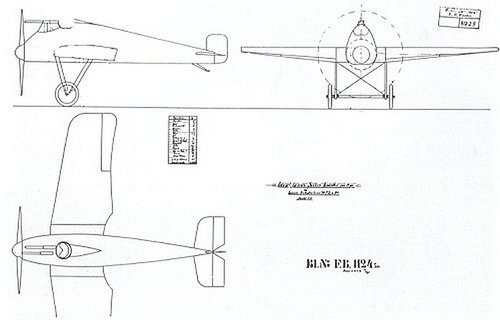 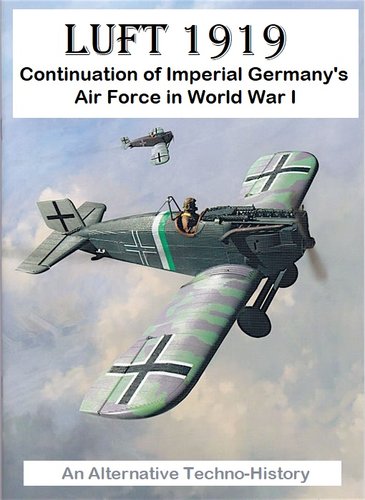 This could have seen US Navy service in a Luft '1919 timeline: 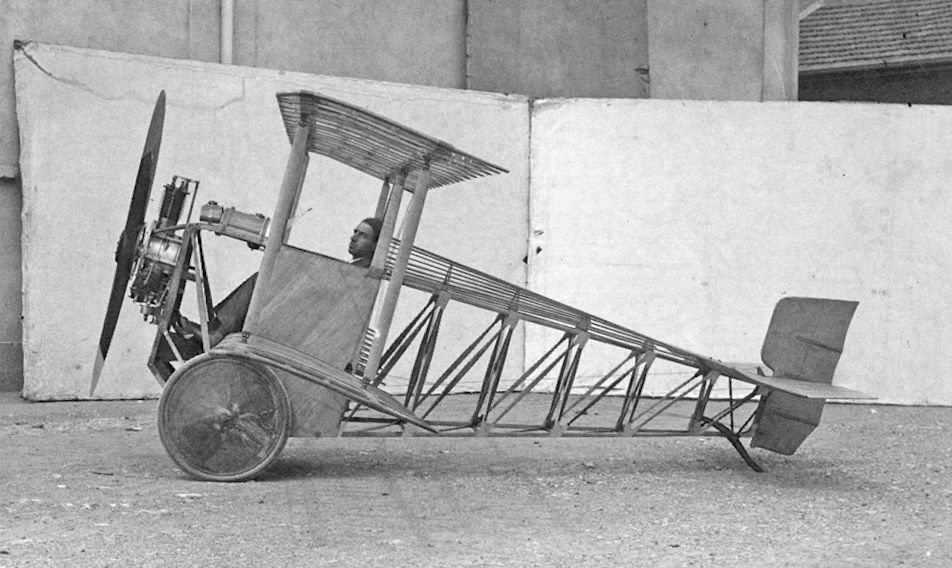 This ultra-light -avant la lettre- single-seat biplane appeared just after the end of WW1. An orthodox design with its pregnant-looking fuselage and toy-like wheels as charming peculiarities. The M…