Skybolt said:
Justo, there were two different versions of the Re-2005R.
Click to expand...

Justo, you mean a FIAT A-38.. no way, too late, by early 1941 the A-38 was in the dustbin (except for its cylinders banks, but this is another story..). Having triple checked, I can offer a theory:
Since the drawing was a conceptual design, not a project drawing, it could be simply wrong in details. As you may notice, the fuselage of the Re-2005T-Axial is rather different form the regular one (I attach an inboard profile for comparison). The rear is longer to make room to the burner tube, but all the mid-to front section has been reworked too, to make room for the compressor and the power transmission complex. I checked with the forms of all the inline inverted-V engines (I think there's no doubt it is an inverted V) in use or in construction/project in Italy by 1943. No one was similar. The rear section is DB-605-like (compressor skewed from down-up), while, for example the Re-10X M-engine had a vertical compressor installation. The 603 is 605-like, and I don't think, for other reasons, it is a 603 (the R projects was initiated just to have a high-performance interceptor BEFORE the 603 would have been available in quantity in licence-build version, in second half of the 1944). In case you noticed what I said on the Gamma used for the static test of the idea, the IF V-engine were all upright-Vs, or impossible to use (air-cooled).

Skybolt said:
Since the drawing was a conceptual design,
Click to expand...

I do agree. None of the German engines I know match the one in the drawing 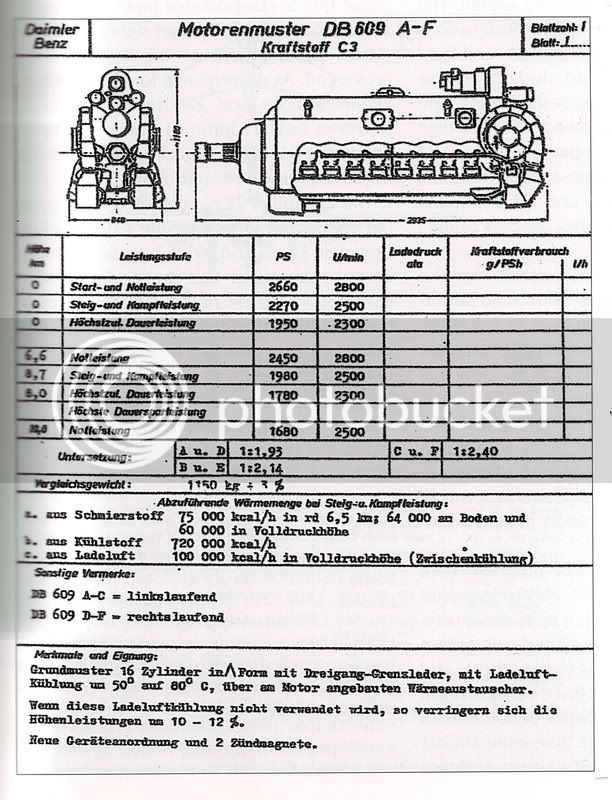 Thanx! It's clear that this isn't the engine in the Re-2005R. I stick to my explanation.
J

Nick Sumner said:
This is the DB609

Well, it is true that the DB-609 has a similar shape, but it is a monster 293.5 m long and the engine in the drawing of the Re 2005 R cannot be more than 227 cm.
You may calcualte that comparing the size of the engine with the pilot seat and the length of the canopy, that are both known.
The cannon length may also serve as a refernce.

I understand your reasons. Please see the similiraty in the attached drawing.

I'm very unclear on the two Re 2005R concepts here. Where, exactly are the engine-driven centrifugal compressor and the axial compressor drawing their air from? I see no intakes other than the belly radiator.

Uh, this is simple. On the centrifugal R the air comes via a long tube running under the pilot seat directly from the 605 compressor. They tested this configuration on the ground and it worked., albeit the thrust was low (120 Kg/s theoretical, 100 Kg/s in practice). The axial R draws the air from two intakes (one per side) just above the trailing edge of the wing at wing-root. In this case the expected thrust was more than triple (350 kg), due at least in part to the greater flux of air (6,4 kg/sec). The compression ratio was 1,5/1.
BTW, probably I have a new version of the theory (and until I return to Rome and try and find out some more details, will remain a theory) : perhaps the "engine" in reality is more a "power pack". To extract power (a sizable chunk, 350 HP) from the back of the engine, the entire compressor section had to be reworked. So what we see from more or less two third of the length on is this mechanical assembly.

red admiral said:
Speaking of other Campini projects, I have this picture which is of a Campini aeroplane. It clearly shows an axial-flow turbojet however, not a motorjet.
Click to expand...

That project from red admiral was called Campini CC.7.

Pure speculation. And the C.C. 7 was a postwar "deduction"... I have somewhere the 1947 article by Campini describing his work during the war: no mention of either a C.C.7 (that would mean Campini CAPRONI...) or a axial flow turbojet project.

Did I say that? I since found out that that picture was in Flight Magazine and was a conceptual sketch by an artist on hearing that the Italians had flown the world's first jet aircraft. It has nothing to do with Campini at all.

I'm not quite sure on the designations but I think most are covered in the thread above. Apparently the three engine version was the CS.3 whereas the CS.4 was a helicopter with cold jet tips.

There are a couple of other images and stats provided by Skybolt that don't have designations, but seem to fit more or less into your list.

Yes, Gregory (Alegi, author of the Fanà article) drew from the same materiel in the archives of the Ufficio Storico dell'Aeronautica that I (and everybody else) saw. It is the same material available from NARA (documents both taken to Reichlin in 1943 and then in the US and a few documents that escaped German attention aftrer the Armistice). Campini ended his collaboration with Caproni immediately after the CC.1 tests, so there isn't anything in the Caproni archives. The designations could be right, maybe they come from Campini's family memories. Campini was heavily sponsored by De Bernardi with the Regia, but they weren't interested in the motoreattore concept.

The real new materiel refers to the tests and is superb ! Moreover, there is a inboard view of a bomber project that come from a private archive that has never been published before. And probably only Gregory could have do that....

Magnificent! Thanks Jens..
A

Outstanding finding Jemiba!!
Thanks for sharing it with us...

Beautiful find, Jens, but the first row cannot be considered "pre-projects", but simply "concepts" from patents.

For the interested, the U.S. patent for the 1932 Campini design is 2024274. Interestingly, the plane concept is part of a grouping of propulsion designs, including for a motorboat!
T

Hikoki1946 said:
For the interested, the U.S. patent for the 1932 Campini design is 2024274. Interestingly, the plane concept is part of a grouping of propulsion designs, including for a motorboat!
Click to expand...

I've not found it with Google Patents. It is at esp@cenet:
http://v3.espacenet.com/publicationDetails/originalDocument?CC=US&NR=2024274A&KC=A&FT=D&date=19351217&DB=EPODOC

I found the U.S. patent here:

Hikoki1946 said:
For the interested, the U.S. patent for the 1932 Campini design is 2024274. Interestingly, the plane concept is part of a grouping of propulsion designs, including for a motorboat!
Click to expand...

I've not found it with Google Patents. It is at esp@cenet:
http://v3.espacenet.com/publicationDetails/originalDocument?CC=US&NR=2024274A&KC=A&FT=D&date=19351217&DB=EPODOC
Click to expand...

I've read the article more carefully again. It's said, the N 1 and N 5 were the first proposals of
Campinis company VENAR ("Velivoli et Natandi a Reazione"), founded in 1931. BTW and
OT here, but nevertheless: After returning from the US, where he worked for Northrop, Campini
proposed an airliner of 90t for 100 pax.

About the "Campini Fighter 1942"
Campini presented for consideration of the Regia Aeronautica, studies for a fighter pushed by two Campini turbines and powered by a single Daimler Benz DB605 engine in the fuselage of the plane, which would allow at least .... interesting features in theory.
Some pictures of the wooden model was being prepared in the offices Caproni, together with the evolution of this formula to crystallize with an intermediate position of the engine (Source Aerei December-1976)

In the same article details the solutions analyzed by Campini

Slightly OT: Why would they consider placing the cockpit so far back ?? I appreciate that the infamous GeeBee racer simply had nowhere else without doubling the aircraft size or spoiling the drag factors, but...

I'm very glad to see that the pilot was finally placed roughly at the 'centre'...

I hate to bump an old topic but this seamed the best place to ask...

I'm trying to find information on the Campini bombers, mainly the one Skybolt posted a diagram of on the first page. I've seen mention of a Campini C.S.11 else where & was wondering if that was it or if it was an earlier project?
T

Hi all.
I found this document !
Who know more on all this Campini projects
Thanks

Hi Lark
I only want to know if I could have MORE !
G

Thanks to the informations about the RE 2005 R and the drawing reported by Skybolt, I'm trying to

scratch a 1/72 RE 2005 R model based on the axial hypothesis. I'm tracing a drawing . The fuselage is completely different from a RE 2005, just a resemblance. What is used from the RE 2005 are: wings and tail components ( even if modified for the new exaust ).
It's not clear to me if the two intakes for the additional propulsion can be located as I traced on the fuselage side, and which dimensions ? If you can help me, thanks in advance.
Ciao
Giovanni 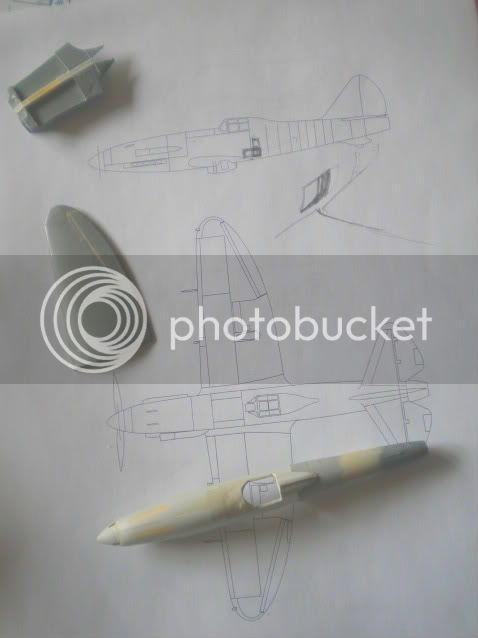 Hi. There was two mixed piston-jet versions of Reggiane Re 2005; i made the other:

Hello folks, I'm Bubba, a new entry. I'm Italian, forgive my english...
Afer all your posts very little things remains to say. I'm quite astonished of your knowledge about. I only posted for two points:
1) Campini really draw a project of a turboprop, the "Campini 3500".
2) I don't know about RSI pilots and He.162, but is certain that 15 RSI pilots of 1° Gruppo Caccia went to Germany for training on Me.163B Komet; they began glider training at Sprottau (Silesia), but very bad weather and very close russians forced them to return to Italy in february 1945.
Bye
J

Welcome Bubba!!!
I komw him since we are both present in another italian astronautics forum...