uk 75 said:
That said, the vision of an RAF with TSR2s and 1154s supported by 681s and 129s remains a tantalising one. It epitomises the naive optimism of the times.
Click to expand...

Pardon my ignorance but what was the 129?

The HS.129 (or DH.129) was a small V/STOL transport, sometimes proposed as a ground refuelling point for forward-based V/STOL fighters.
http://www.secretprojects.co.uk/forum/index.php/topic,634.0.html
J

Thanks for the info. I think I have seen some of those images before, but assumed they were AW681 as they are quite similar. The only 129 I could think of was the current helo (The AW suffice on the helicopters does keep causing me some confusion, I automatically think of Armstrong Whitworth not Augusta Westland).

Thanks and regards.
A

C-130H and C.160 Transall could do much of HS681/NBMR.4's job. Cost/complexity would dish all these 1959-65 V/STOL schemes, except only the Gutersloh Wing of Harrier GR.1. That was assigned a very precise Task of scattering Red armour, for which dispersed operation was vital. When funded, 2/65, the assumption was that the Improved Kiloton Weapon - quite a small Bang, guv, honest, not to provoke escalation - could be used. (to be) WE177A was British, I tell you, so could be deployed by UK PM. What dished all the NBMR.3 V/STOL strike schemes was that US dual key stores were controlled at Main Base by USAF "custodials", who could not disperse. So no point in buying V/STOL cost/complexity (conscript ground crew) only to toss HE on Ivan.

FRG persevered longer with hi-tech V/STOL strike, AVS enduring into early-1968. NATO then concluded that long runways would remain available through "flexible" HE phase of conflict, and would still be there to launch the one-sortie nuke phase. So, Tornado, F-15/16/18, Mirages, OK. No need to scorch and rut meadows, trying to replenish hidden hoppers.

Indeed, and often design points points were quite different. Just compare the Harrier
(true V/STOL) to the VAK 191. But if you read contemporary German military publications,
the feeling, not to live at the front, but actually being the front, with no area to retreat to,
had sunk in. If you look at those internal mags, made on squadron level, with reports about
the last summer fair, the 20th jubilee of the squadron commander and the like (had or have
a some of them from a flea market), you can find articles as well, stating that the German
airforce would have to fight a kind of "aerial guerilla warfare", with true VTOL being absolutely
mandatory.

alertken said:
except only the Gutersloh Wing of Harrier GR.1. That was assigned a very precise Task of scattering Red armour, for which dispersed operation was vital.
Click to expand...

According to the Crossman diaries those RAF Harriers were a political not a military decision- work had to be found for Hawker Siddeley after the cancellation of the 681 and P.1154 and the P.1127 was it. Apparently funded outside the normal defence budget too as the RAF didn't want it.
A

Tks Jem: my approach to History, and especially to Why did they do that?, is to assume sanity - it seemed a good idea at the time - and to try to put myself in the boots of the mover and shaker. So, for example: why did USSR put IRBMs in Cuba, 1962? Well, take a globe and turn it so that Siberia is at the top. Now mark US/NATO nuke sites, such as Jupiter/Turkey. All then becomes clear. We, here (Euro-centric) can fall into the trap of believing the earth spins on a DC/London axis.
Z

The illustration shows the early pre launch 681 arrangement as it has 4 wheel MLG's. Shortly after the 681 contract was placed it changed to a "3 wheels in a line" arrangement. A bit like the C130 but with an extra wheel, but on 681 each one of the 3 Landing Gears retracted forward as opposed to C130 straight upward raise.

I managed to have a good look into the surviving 681 files a good few years ago. They included a few photo's of actual first Aircraft detail parts in manufacture. It was sad reading the memo's written in the last few months of the project, as many related to key members of the development staff leaving and the inability to replace them.

C130 main problem is it bulks out before it loads out;- i.e. it could uplift more landies than it can be actually loaded because you can only fit a single row of them in the Fuselage. Fairly early in the 1960's it was realised that with a re-optimised fuselage diameter it was possible to ship more load (i.e. two rows) with fewer flights. This was the principle of 681/->/A400M
P

Thanks Overscan
I didn't know that the 681 project got as far as mock-up!
A sad opertunity and capability missed by the Brit's, something they would not make up for for decades to come in the form of the American C-17 :-[
Also just noticed on your posted 'Vertical Airlift' (page 8) the notion that the 681 could airlift a Centurian MBT! Interesting ..... and again a sad opertunity missed

How would one go about acquiring a copy of this article? The magazine has been defunct for years, and its publisher (Key Publishing) doesn't offer back issues on their website.


I get later a version of that issue,I can send it to you.

On the subject of Lockheed C-130s bulking-out long before they reach gross weight: Lockheed has built a bunch of stretched C-130s to increase cabin volume. Stretched C-130s can be identified by side doors that are still near the wing trailing edge, but well forward of the tail ramp. 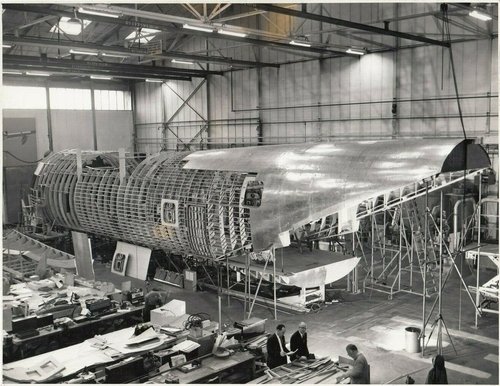