Dear gal got,
A nuclear-powered zeppelin makes perfect sense.
OTL the US Navy flew a variety of ASW and AEW blimps during WW2 and the Cold War. They only retired their last N-Class blimp in 1962, as spy satellites entered service.
R

Purely speculation:
Posts #97 and 255 remind us that distance is a good insulator. That helps explain why #55 had such large wing tip pods. If you mount crew on one wing tip and the reactor on the far wing tip, you create the greatest possible distance for crew protection. It also only requires heavy shielding on one side of the cockpit.
This concept works best on high aspect-ratio, sub-sonic wings.
As an aside, circa 1945, the USAAF test-flew a B-17 with a wing tip mounted gun turret. Test crew enjoyed the ride!

Via my dear Scott,

I recall seeing an "Atoms for Peace" article that focused on the airship design. It does not look practical or safe. 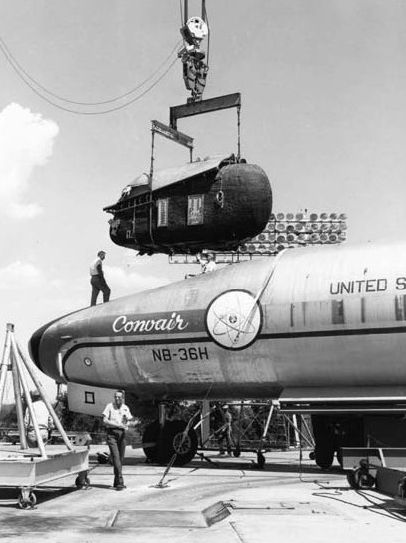 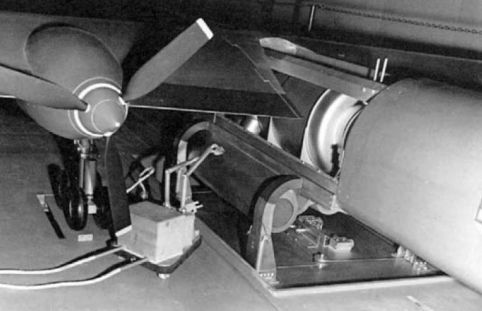 Note: Since discovered to be from Aviation Historian 04.
Last edited: Jun 6, 2020

I saw this drawing in many sources. Anybody know if it was a real project/proposal?

1956 USAF FUTURE rocket atomic plane art Admiral research vintage print ad - £7.69. FOR SALE! This is an original 1956 print ad for Admiral research! It measures approximately 10.25" x 7.5" overall, has no stains or tears, comes from a dry, high-altitude, smoke-free environment, and is strictly...

Via my dear Scott,and Aviation Week,

Note: Since discovered to be from Aviation Historian 04.
Click to expand...

Interesting pictures, but my mind is screamin - what were they thinking!

The clearly put a lot of effort into the crew and groundcrew protection, but either didnt consider, or did consider the people on the ground, if it crashes etc. and considered it to be ok? I know people were expendable back then, but they clearly knew it was dangerous.

Or were they only thinking of keeping the crew functional for what was probably a one-way trip, and the groundcrew long enough to load more than 1 aircraft......
M

people have always been expendable. The 'greater good' and all that. When you become too risk averse, you become more vulnerable to your fellow man. Today, we are very risk averse.

merriman said:
people have always been expendable. The 'greater good' and all that. When you become too risk averse, you become more vulnerable to your fellow man. Today, we are very risk averse.

To survive in a competitive world you must demonstrate that you are crazier than your potential opponent. - Well I think they succeeded then!

Not so much a project but rather a new working paper prepared by the Australian Air Power Development Centre to explore possibilities for nuclear-engine air power:

merriman said:
people have always been expendable. The 'greater good' and all that. When you become too risk averse, you become more vulnerable to your fellow man. Today, we are very risk averse.

To survive in a competitive world you must demonstrate that you are crazier than your potential opponent. - Well I think they succeeded then!
Click to expand...

I think that, to survive, you actually have to be saner than the craziest guy on your team.

I suspect that a lot of these kinds of projects happen because of fads and narrow focus on particular technologies and abstract benefits, rather than broad understanding of real-world requirements. Engineering and military planning are as vulnerable to changing fashion as anything else. In the 1950s, nuclear was where all the cool kids were and the real health effects of nucear radiation were still closely held. So everything had to be nuclear--tanks, cars, airplanes, oil and gas wells, military solutions to third-world guerilla wars, etc. Practicality and side effects be damned!

Luckily, the sane people on both sides of the Cold War mostly prevailed (at least until Putin and his new missile)--or else the next fad took over and nuclear was no longer cool. Take your pick.
A

How good would Molten Salt Reactors be ? shame we can't bring back nuclear airliners in a safe, sane way - zero CO2 for intercontinental air travel.. (yes, I'm aware of the ARE in the 50's).

I'm not sure. Perhaps.....
(1) Compact size reactor for light weight and low drag.
(2) Simple structure. Fireball engine had only one control rod and no fuel assembly.
(3) When loss of coolant accident(LOCA),it's easy to stop chain reaction by draining Molten Salt including liquid fuel to the drain tank.
Because there are no moderator which promote chain reaction in the drain tank. (Compared with solid fuel liquid metal cooling reactor).
(4) Closed cycle.(No air contamination)
(5) Since solid fuel that cracks due to nuclear fission is not used, the frequency of fuel exchange is low.
(6) Fuel exchange is easy.

https://www.zmescience.com/science/what-is-molten-salt-reactor-424343/
"MSRs are walk-away safe. They cannot melt down like conventional reactors because they are, by design, already molten. An operator cannot even force an MSR to overheat. If for some reason an MSR were to overheat, the heat would melt a freeze-plug at the bottom of the reactor vessel and the liquid fuel salts would drain into the emergency cooling tanks where it would cool and solidify. No operator interaction nor even emergency backup power is needed for this to happen.

Even a human engineered breach (such as a terrorist attack) of an MSR cannot cause any significant release of radioactivity. The fuel salts for MSRs work at normal atmospheric pressure, so a breach of the reactor containment vessel would simply leak out the liquid fuel which would then solidify as it cooled. (By comparison, a breach of a conventional reactor leads to the highly pressurized and radioactive water coolant spewing into the atmosphere and potentially leaking into surrounding bodies of water.) Additionally, radioactive byproducts of fission like iodine-131, cesium-134 and cesium-137 (such as those released into the atmosphere and ocean by the Fukushima meltdown) are physically bound to the hardened coolant and do not leave the reactor site."

Let's see if I can get the whole thing correctly...

So Fireball was "improved ARE", still Molten Salt Reactor ? And once connected to the four turbojets, the whole thing becomes P-1 ?

Hi!
https://energyfromthorium.com/2006/04/22/a-brief-history-of-the-liquid-fluoride-reactor/
"The ARE went critical for the first time on November 3, 1954 using a mixture of sodium fluoride, zirconium fluoride, and uranium tetrafluoride. It operated for a total of 100 hours at a maximum temperature of 1600°F and a maximum power of 2.5 MW (thermal). Heat generated in the fluoride salt was removed by a liquid sodium coolant loop and then dumped in an air-cooled heat exchanger. The ARE showed that not only was the UF4 chemically stable in the solvent, but also that the fission products generated by fission formed stable fluorides in the salt mixture and did not plate out on surfaces. Another surprise was that gaseous fission products were removed essentially automatically by the pumping action of the reactor, accumulating in the pump bowl above the reactor. The fluid fuel had a very strong negative temperature coefficient, and the reactor could easily be started and stopped by changing the power demand on the reactor, without control rods. Despite its success, the engineers were not anxious to run the reactor for an extended period, since the “in-and-out” tubular configuration could not drain the salt from the core in the event of an accident. After 8 days the reactor was shut down.
Flushed with success from the ARE, ORNL engineers proposed the liquid-fluoride reactor as the baseline for the Aircraft Reactor Program and it was selected. Plans were made to build a “real” liquid-fluoride reactor that would operate at 60 MWt and would be of a flight-like configuration. This reactor was to be called the Aircraft Reactor Test, but the engineers referred to it as the “Fireball”
. The Fireball was a reflector-moderated design that used the NaF-ZrF4-UF4 fuel of the ARE, but was moderated by beryllium metal and cooled by liquid sodium-potassium eutectic (NaK). The NaK was planned to carry the fission heat to the turbojet engines that would provide thrust to the aircraft in flight."
A

The First Nuclear Era is Alvin Weinberg's autobiography, the memoirs of a most influential American nuclear engineer/physicist. These reminiscences date from the dawning of the nuclear age in the early 1940s to the present. It is the story of one notable scientist's life and times and a look...
books.google.fr

There were, kind of, three different kind of nuclear engines explored by ANP

The attached document helped a little.

- G.E direct cycle was horrific, spewing radioactivity all over the countryside
- Indirect cycle was much more difficult to achieve
- and then it got bogged down into "WS-125A vs CAMAL" controversy.

That is
- do we want a subsonic, lumbering platform with nearly-infinite endurance
or
- do we want a XB-70 (WS-110) except with a nuclear engine. That is: an ultrafast supersonic bomber (= WS-125A)

From what Asnys told me at AH.com, seem that the state-of-the-art was on the side of the long-endurance subsonic platform (CAMAL) rather than WS-125A...

Can someone confirm if the above is correct or incorrect ?

Jemiba said:
Just found, when I was searching something totally different :
Proposals for nuclear powered cargo seaplanes, either with turboprops,
or turbofans, made by J.F.Brady, engineer at Convair Division of General
Dynamics Corporation.
(from :AviationWeek, 4/1960
Click to expand...