Looks like the long-rumoured job losses at Warton due to the run-down in Eurofighter production is coming.
https://www.theguardian.com/business/2017/oct/09/bae-systems-is-planning-1000-job-cuts

Seems like the anticipated second Saudi order is unlikely, and that the recent Qatari deal may be a mirage too:

They also have a new CEO, who may see the future differently.

It's that old favourite MRCA - must re-organize company again. Though eliminating layers of management is novel for a BAE reorganization, most of these things add them.
F

As interest in fifth-generation fighters builds in the UAE, a top Royal Air Force officer explained at the show how the Eurofighter Typhoon is already demonstrating how a non-stealthy fighter can integrate with the Lockheed Martin F-35 in contested airspace.
Click to expand...

Germany favors Eurofighter as it seeks to replace Tornado

The last month, the chief of the German air force indicated that he preferred Lockheed Martin’s F-35
M

Well it's what the UK have done in the first instance, but are they talking about new jets or spreading the fleet more thinly?

Of course the Government would say that; buying Eurofighters backs Airbus, keeps the German Eurofighter line open and saves money.
Though I share mrmalaya's hunch that the Defence Ministry is probably thinking about retrofitting air-ground enhancements rather than buying more airframes (or a modest buy, certainly not 85 more).
M

Also very hard for Airbus to push Typhoon in Belgium if Germany overlooks it in favour of the F35.

It actually makes a lot of sense regardless, although as others have said - the nuclear role appears to be an unresolved problem for Typhoon.
F

Kuwait's future fleet of Typhoons remains on track for introduction from 2019, with the first major parts now in production by the Eurofighter partner companies.
Click to expand...

Airbus and Eurofighter are offering an upgraded Typhoon with increased thrust EJ200s and Euroradar Captor-E AESA radar to replace Germany's Tornados from 2025.

For this German version, will there be sockets on the fuselage for future CFTs?
Edit:
But it might have the EuroFIRST PIRATE; it would be first for service jets of the German Air Force. ???

Is there going to be a competition? I know Airbus was threatening Germany the other day about going for the F-35 in the strike role. Shouldn't the Typhoon be able to stand on its merits sans threats?
M

Airbus were being fairly logical for a change, although it was only the flip side of the argument that Germany is undermining NATO if it doesn't go for the F35.

If the T3 is plumbed for CFTs, I can't imagine this T4 being anything other than CFT ready. The UK has been quiet on CFTs for Typhoon, but that is probably something that will become more tangeable once they are the only Storm Shadow carrier for the RAF.

Electronic attack was something the RAF were very keen on using the AESA for, so that would support with this article too.

mrmalaya said:
Airbus were being fairly logical for a change, although it was only the flip side of the argument that Germany is undermining NATO if it doesn't go for the F35.
Click to expand...

So, "no" to there being a competition? I wonder why.

There are the political and economical dimensions of keeping an iron in the fire with fast jets.

Arjen said:
There are the political and economical dimensions of keeping an iron in the fire with fast jets.
Click to expand...

You'd think they'd forgo this for at least, if not buying, then building their own next-gen jet.

Germany doesn't have any nukes. Oh, they think we'll enable their Typhoon to carry them after they pass on F-35s?

sferrin said:
You'd think they'd forgo this for at least, if not buying, then building their own next-gen jet.
Click to expand...

That next-gen jet is not going to be ready in 2025 - when Tornado needs replacing. Germany needs to decide, a major consideration is keeping its manufacturing abilities alive. Among others, to be able to build that next-gen jet.

sferrin said:
So, "no" to there being a competition? I wonder why.
Click to expand...

LM are offering the F-35 anyway, with a lead time of three years. They see the F-35 as a complimentary asset to Typhoon (not an unrealistic claim given the dual RAF fleet) and a "leg up" to European industry.
Given the German interest that has been expressed it seems likely that both types will be evaluated, assuming of course Germany does replace its Tornado fleet. Like the Franco-German FCAS, there seems to be a lot of industry noise but not much coming from the defence ministries.
https://www.flightglobal.com/news/articles/ila-f-35-competes-against-eurofighter-for-german-to-448062/

Borne out by MTU urging the politicians to get busy if they are going to develop a new engine in time. I'm surprised that MTU is going it alone (someone please correct me if I'm wrong but have MTU ever developed an engine outside of an international collaboration?). I wouldn't be surprised if Safran don't get on board at some point. Also surprising is the lack of any involvement from Rolls-Royce so far, they seem keen to get onto a future fighter engine so I suppose it will only be a matter of time.
https://www.flightglobal.com/news/articles/ila-mtu-urges-speedy-start-for-future-european-fig-448070/
T

He argues that “lessons must be learned” from the Europrop International TP400 – Europe's latest military engine programme, which powers the Airbus A400M tactical transport – and that a new development effort should be planned without "too tight" a schedule, under which "milestones will be missed".
Click to expand...

Central for a new engine programme will be the development of more heat-resistant materials, which will require less cooling air from the gas path and offer increased efficiency, and variable-cycle engine technology, Schreyögg says. He notes that variable geometries in the compressor and turbine will be required to provide a future aircraft with maximum thrust in combat situations, along with versatility and efficiency in less demanding conditions.
Click to expand...

Anyone else with the word "adaptative" in mind?

sferrin said:
You'd think they'd forgo this for at least, if not buying, then building their own next-gen jet.
Click to expand...

That next-gen jet is not going to be ready in 2025 - when Tornado needs replacing. Germany needs to decide, a major consideration is keeping its manufacturing abilities alive. Among others, to be able to build that next-gen jet.
Click to expand...

It's too late to get workshare on the F-35 program... Except -- I really don't know why Germany (and/or France) doesn't get the opportunity to buy out some or all of Turkey's membership status and resulting offsets and production/maintenance portions. Make Turkey whole through structured payments and assume their workshare.

I realize it would be less than ideal both practically and politically, but it keeps/expands manufacturing in Germany, gives them hands on experience in 5th gen operations and production and resulting technology transfers, replaces the Tornado in the short-term, pushes back the timeline/urgency for their joint project with France long-term, etc

Also rids the consortium of a somewhat prickly problem re:Turkey in a way short of yanking it from them entirely. Seems like something of a kludge, but so are all the alternatives.

Germany doesn't have any nukes. Oh, they think we'll enable their Typhoon to carry them after they pass on F-35s?
Click to expand...

oh yes i had my Haddock moment reading that line

The Eurofighter is not a Bomber, that part is for Tornado fleet or what ever the Luftwaffe has in operations for moment
Official they have around 85 Tornados, but handful are in operational condition

and here lies the Problem so long German Federal Government not putting more money into Luftwaffe
it don't matter if they got Eurofighter, F-35 or new fancy-schmancy German French Bomber, they become sitting ducks do shoe string Budget on maintenance...

90 new enhanced EF for the replacement of the german Tornado ?

enhancements earmarked include upgrades to the E-Scan radar now being developed; long-range and standoff weapons; enhanced defensive aids; improvements to the efficiency and power output of the EJ200 engines (he cited a 15% increase in power); as well as enhancements related to the suppression of enemy air defences (SEAD)
Click to expand...

Just musing, were any trials carried out with the Typhoon for possible carriage of the B.61? (as per German Tornado)

Image ; Sandia B.61 nuclear store training shape being fitted to a Panavia Tornado of JaboG.33 at Buchel

Given the rumours that the RAF might cut its F-35 order in favour of cheaper Typhoons it might be possible that the RAF will order more to a similar standard.
T

Given current events, I wonder if this is back on the table? Though with Brussels' attempting to reprise Carthago delenda est with regards as to the British, Eurofighter and NETMA may understandably be otherwise distracted... 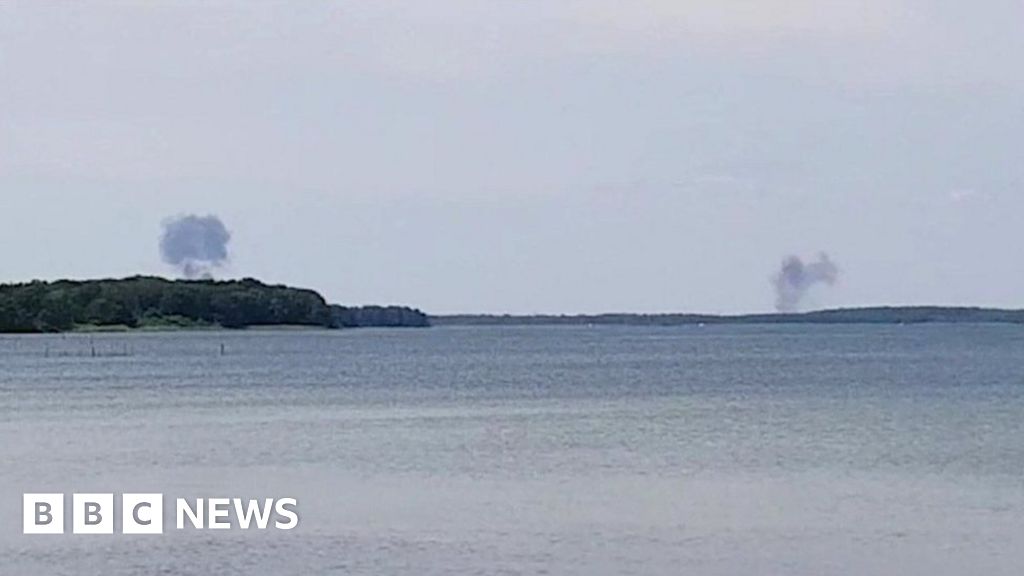 The two pilots managed to eject but only one of them is thought to have survived.
www.bbc.com

The past 12 months have seen a momentous shift in the UK’s combat aircraft balance, with Royal Air Force (RAF) Eurofighter Typhoon FGR4s having received new ground-attack weapons, its last Panavia Tornado GR4s retiring and the type’s successor – the Lockheed Martin F-35B – conducting its first operational missions in the Middle East.
Click to expand... 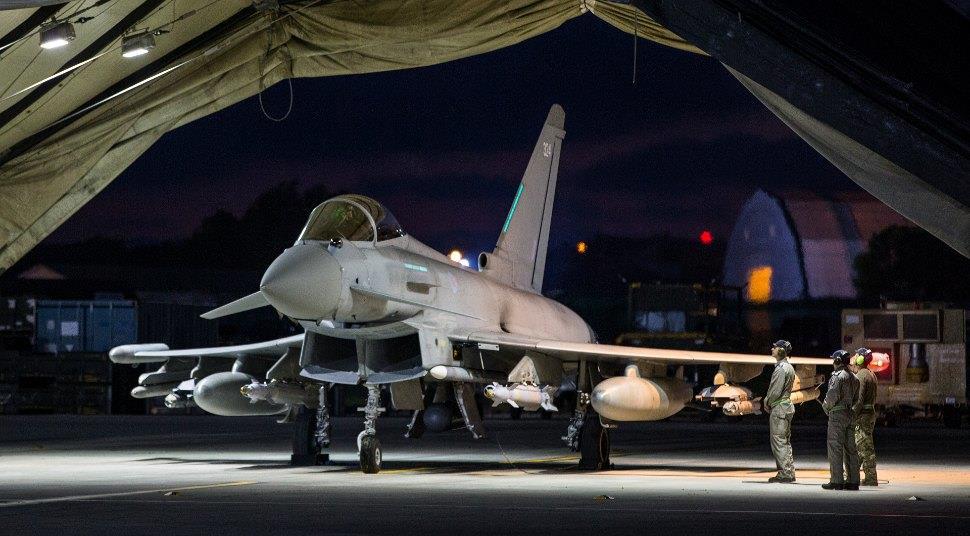 RIAT: How Typhoon updates put Centurion on guard for UK

The past 12 months have seen a momentous shift in the UK's combat aircraft balance, with Royal Air Force Eurofighter Typhoon FGR4s having received new ground-attack weapons, its last Panavia Tornado GR4s retiring and the type's successor - the Lockheed Martin F-35B - conducting its first...

The RAF are soon to receive their final Typhoon as the production line now switches to the export orders from Kuwait and Oman.

Electronic attack Typhoon with 1000 litre tanks on the inboard wing pylons! Is that something that has been tested yet?

SteveO said:
Electronic attack Typhoon with 1000 litre tanks on the inboard wing pylons! Is that something that has been tested yet?

That model appears to have the aerodynamic modification kit (AMK) shaped fuselage strakes and the trailing edge flaps look extended (kitbashed?). I wonder if it's needed to carry fuel tanks on the inboard pylons or can a standard Typhoon do it too?