This was a project of the (then) West German Army during the late '80s/early'90s. It was designed for anti-tank and anti-helicopter warfare roles and was based on the hull of the Leopard 1 chassis converted by removing the turret and fitting an elevating arm with weapons/sensors that could reach a height of 12m. There seems to have been some variance in exact weapons carried - some sources refer to TRIGAT whilst others mention HOT3 and Stinger. The sight was downlinked to a gunner's position in the hull, which guided the missiles via a TV monitor. There was a hatch on the center front deck for the driver, one on the right deck behind the driver for the commander, and a large hatch behind the elevating arm for reloading of missiles.

The then Wegmann was selected in 1987 as the winner (this was apparently quite a surprise) but the program was cancelled in the early 1990s after only one prototype was built.

The last picture shows the vehicle with the weapons/sensor platform stowed.

Thanks for some great pics and info on the Panther AT/AA system Greg!
I never knew they actually built it in mock-up/prototype form!

Looks amazing - wish there was a model kit of that! Thanks

Very nice. Thanks for the new info and pictures.

I can't help but to be moved even further toward thinking that Giraffe tanks are cool ;D

Some more information on related projects can be found in an old thread here:
http://www.secretprojects.co.uk/forum/index.php/topic,3307.0
M

[Report under the rubric "In the Arsenals and at the
Ranges"]

The magazine ARMADA INTERNATIONAL reports
that the Krauss Maffei, MBB and MAN companies
exhibited an experimental model of the Panther, a
wheeled (8X8) self-propelled antitank launcher designed
by them, at an international air exhibition in Hannover,
FRG. The main difference between it and similar existing
weapons is that the turret with weapons and gunner-operator
is located on an elevating platform (see photo
[photographs not reproduced]).

The rotating turret is armored and is equipped with a
filter-ventilation system. One triple-unit launcher with
Hot antitank guided missiles is mounted on each side
(another 12 missiles are stored in the battle stowage).

According to the magazine WEHRTECHNIK, a version
of the elevating platform armed with 16 Hot antitank
guided missiles is being designed in the FRG for the
Leopard-1 tank chassis. Foreign experts believe that
vehicles with the elevating platforms will have greater
survivability on the battle field and greater combat
capabilities. Among other things, it is anticipated that
the weapon can be used for combatting helicopters.

Today the hydraulically operated elevating arm is lkely to be replaced by a kind of tethered UAV. I think. It's quite heavy
and probably forcing the carrier vehicle to be stationary during use and very restricted with regards to height and lateral
movement. A tethered UAV surely would have a more limited payload (I would think of, say, just two ATM against 6 for the
jib), but would largely increase tactical flexibility.

Something like a 21st Century Falcon/Aerie, with the Falcon being unmanned, you mean?

Indeed ! That was actually the thread I was looking for ! Unmanned, electrically driven and tethered,
it would be able to use a nearly endless powersupply.

Here's another old thread along the same lines: http://www.secretprojects.co.uk/forum/index.php/topic,12261.0.html

From the Tanknet 'What If: A World Frozen In The Cold War' thread, courtesy of Dave Clark: 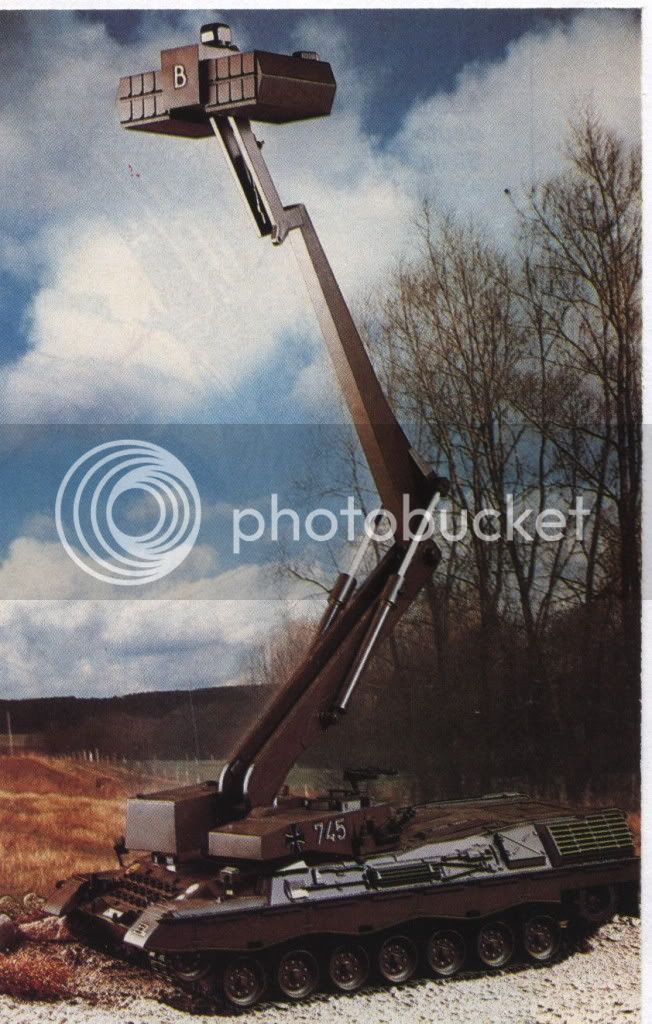 Found the following paper on the roles and effectiveness of the Panther tucked in among the proceedings of the 28th Annual US Army Operations Research Symposium (1989). Interestingly it seems to claim that the planned in-service date of the Panther was the year 2000 (most late '80s sources give the first operational examples as due to come in to service around 1993). Possibly the author meant that the Panther was supposed to be in full service by 2000AD.