Jemiba said:
In 1917 Dr. Ing. Rudolf Wagner submitted a design for a steam powered "R-Flugzeug" to the "Inspektion
der Fliegertruppen" (Technical Service of the Imperial German Airforce). Wagner was already quite well
known for maritime developments, including light-weight steam turbine plants and proposed to used such
a propulsion for a large aircraft. The intended powerplant with 1000 hp would have been placed in the
fuselage would have powered large diameter contra-props, pilot and part of the crew would have been
placed in the upper cabin, bombload and the rest of the crew in the lower compartment.
No estimated data are known, span seems to have been around 40 m, similar to other then current "R-
Flugzeuge"
The reconstruction, using patent files and mentions in contemporary literature was done by Peter Garnatz and
Günter Kusch and published in Luftfahrt International N°24 1977.
Click to expand...

also some info about Wagner bomber,and a drawing to a twin engined Landplane,may be
it was a bomber project;

This "twin engined land aircraft" is just mentioned as such, no word, if military or civil use.
Please see your thread about the "Wagner Seaplane Projects"
(http://www.secretprojects.co.uk/forum/index.php/topic,18011.0.html#new ), too.


but they said; it looked like Dornier Do.13 and Do.23 in its shape,and
may be it was a bomber like them.


here is two patents,one for AGO and the other for AEG companies,and may be
they were the R-project aircraft designs.

Are you sure that this is an r-project? It looks a lot like an A.G.O. C.I/C.II pusher development with some form of distributed propellers.

The gun ring looks a bit large. Perhaps the aircraft is just a generic layout being used as part of the patent drawings (rather than an intended configuration)?


I suggested those aircraft were R-projects,of course I am not sure.

Do you know what patent database those come from? I'd love to read the original patent.
Thanks for all the work - really fascinating stuff!


but may be the numbers in the pictures,can help.

Avimimus said:
Do you know what patent database those come from? I'd love to read the original patent.
Thanks for all the work - really fascinating stuff!
Click to expand...


here is the Zeppelin-Staaken L seaplane and V.G.O or R.I bomber aircraft.

Thank you my dear Pometablva,


and unfortunately,there was a drawings to them in Internet from while,but I didn't
keep them.


here is the AEG R.I and from the same site a small info about the LFG Roland R.I project,
but no drawing.


here is two patents,one for AGO and the other for AEG companies,and may be
they were the R-project aircraft designs.

Now I can say,I am sure;


the patent 310096 was the AGO R-project or sometimes called R-plane,please see;

Those posts regarding Austrian aircraft were moved to an own topic here:
http://www.secretprojects.co.uk/forum/index.php/topic,21084.msg207997.html#new,
reasons see below:


Stargazer2006 said:
.. but didn't all these machines fly in German colors, anyway? (I'm no expert of the First World War, sorry!)
Click to expand...

At the beginning of the war, the Austrian flag still was used on Austrian aircraft, still then mostly of Austrian
production. With the arrival of more and more German aircraft, generally marked with the "Iron Cross",
that flag was painted on additionally, but later it vanished and oly the cross remained- A reason seemed to
be its bright colours, which made those aircraft easier recognisable. Above all, there was the danger of mis-
identifying them for Italian aircraft.
I think, it was a similar case, as the coours of the RAAF during WW II, which were identical to those of the RAF.
And who would dare to call the CAC Boomerang a British aircraft ?

and here is the Schutte-Lanz R.I twin-boom heavy bomber project of 1916;

And from anther site.

http://www.iwm.org.uk/collections/item/object/205315249 says that this aircraft was not built.
The reality is what is stated in http://alternathistory.org.ua/tyazhelye-bombardirovshchiki-luftschiffbau-schuette-lanz-proekt-tyazhelogo-bombardirovshchika-schuel: R.I был завершен на 80%. It was nearly completed (80%).

Many thanks to you my dear Tuizentfloot,

and in my list,the R.I was developed from G.I,so maybe G.I remained a Project only.
T

I don't think so. Lange and Herris are clear: it was just a change of designation for the same aircraft. I quote Herris (because it is in English):

I think the siemens-Schuckert R.I and G.I was a different airplanes,please see;

Dear hesham, the scan from Gray & Thetford, p. 570, concerns the L I, originally designated G III, and of which three were built.

I enclose a scan from Lange, p. 86-87, about the G-, L- and R-types of SSW, including the so-called Forssman R-Flugzeug.

Thank you my dear Tuizentfloot.
W

Hi, the model is based on the drawings in the Haddow & Grosz book. I started an even bigger one, but it's not finished yet.
Steve

To McTodd
Thanks for searching in these books. Good to know ! Thanks a lot for it!

Alcides said:
Lucas the original source for that drawings is the book:
The German Giants: The German R-Planes 1914-1918 (Putnams German Aircraft)

The old site about asymmetrical aircraft isn't online anymore ( you can get some contents with the wayback machine) so I'm going to repost here the content about the Gotha Go.VI:

"The first to apply his imagination in the asymmetric aircraft design direction, Hans Burkhard did so as a clever means of reducing drag. Born in Switzerland, Burkhard joined the German Gothaer Waggonfabrik as its chief designer on October 1, 1914. One of the firm's early contracts during WWI was to mass-produce Germany's first twin-engine airplane, the Gotha G.I. In Burkhard's opinion the fuselage and two engine nacelles representated three drag-producing bodies. "I began", he later said, "to think about ways in which the air resistance could be reduced. And I came upon the idea of an asymmetric configuration."
After much tinkering around with different arrangements, Burkhard concluded that the most efficient way to get twin-engine power with two bodies was to mount the fuselage with TRACTOR engine and tail surfaces to the left side while the right side would have a small nacelle incorporating a PUSHER engine and an observer/gunner's cockpit, that extended forward of the tractor propeller.

To compensate for the different power-to-drag coefficients, the nacelle was placed somewhat closer to the wing central axis than was the long fuselage. In addition to reducing drag, the pusher-tractor arrangement, with its overlapping propeller arcs, allowed the engines' thrust lines to be closer together, thereby reducing directional-control problems from torque forces in case one engine malfunctioned. On September 22, 1915, Burkhard obtained German Patent number 300 676 for his unusual design, but the German government was not interested in pursuing its development. Instead, Berkhard had to return to more conventional designs: G.II, III, IV and V.

By late 1917, the Gotha bombers were becoming increasingly vulnerable to attack by British fighters, and the German military expressed an interest in a bomber of higher performance. Burkhard was eager to prove that his asymmetric concept could produce the world-beater.

The new aircraft, designated G.VI, was built in the winter of 1917-1918. The construction was almost identical to those of the Go.IV and Go.V. The wing span was slightly reduced, though. Before it crash landed in the summer of 1918, the plane made a few successfull flights, proving the asymmetric conception was vital. Burkhard claimed that the Go.VI flew very well and exceeded in performance its conventional predecessors. The slight buffeting of the rear fuselage was to be neutralized by utilizing the ASYMMETRIC TAILPLANE on the second prototype.

The war ended before the second aircraft was completed. It is believed to have been destroyed in preference to being turned to the Inter-Allied Control Comission."


I'm attaching a couple of drawings. The first is a provisional drawing by I.Shestakov. Anyone has the second one, with the asymmetrical variants in higher resolution or knows about the source?

Here is a Gotha asymmetric Projects,one of them had three engines.

Does anyone know where records could be found regarding the airfoils for some of these aircraft? I've found one drawing showing the inner wing section for the SSW R.VIII but a lot of the others are hard to find. I'm particularly curious about the Zepplin Lindau (Dornier) Rs.III's monoplane wing.

as I know the Daimler G.I and G.II was a redesigned of R.I and R.II,but with different engines,
and maybe they had some improvements in act,can anyone confirm on this ?.

and here is the Schutte-Lanz R.I twin-boom heavy bomber project of 1916;

And from anther site.

Described but not illustrated at "The German Giants" from Haddow and Grosz
Click to expand...

Unfortunately no Info or drawings survivor for them.

the Schütte-Lanz G.II was destroyed in its first flight,and G.VI was a tri-fuselage twin-boom bomber,
powered by three engines,two tractor and one pusher,but for the last,I don't know if it was built or
not ?.
Last edited: Dec 28, 2019

According to the article in the FR X N°80, no 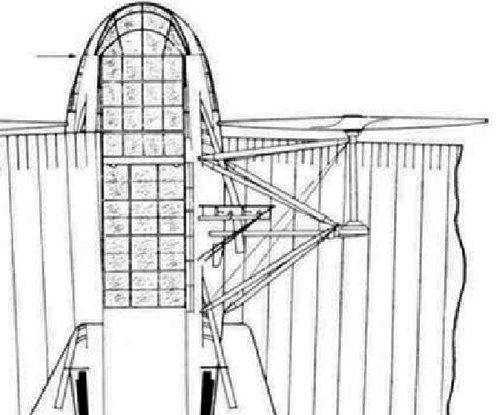 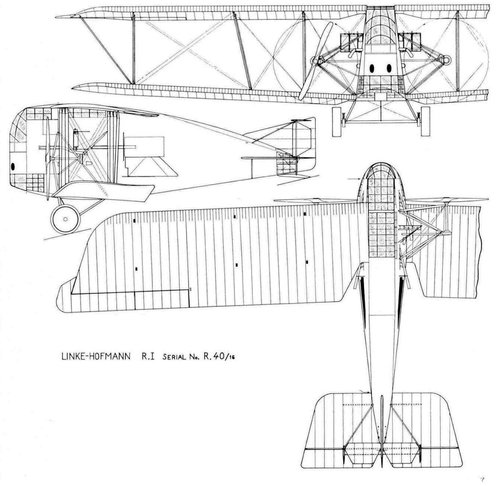 The fuselage is so tall because it is three stories, the upper cockpit across the engine deck, the bottom is a bomb bay.
It seems that the reason for not dividing the engine into the left and right nacelles like zeppelin-Sturken R series at the same time is because it wanted to reduce the weight and air resistance of the nacelle. This arrangement will also reduce the number of engineers.
The strange thing about Linke Hoffman R.I is that the second half of the fuselage of No.1 aircraft was covered with a transparent resin film called Cellon (Cellon or Zellon) instead of a feather cloth.
Theron is a resin patented in 1909 by the chemist Arthur Eichengr.n and a compound of cellulose acetate (acetylcellulose) and the cerebellum, and has the advantage of flame retardant.
The reason for adopting the Theron is that it aimed at "optical stealth" that lowers the non-discovery rate, but when actually try to adopt it, it seems to have become conspicuous by the reflected light.
No.2 aircraft used a normal cloth, but the height of the center of gravity caused by the height of the fuselage was a disaster, and had an accident that fell to the front at the test stage.
One crew member died and the pilot was unpopular with maneuverability, so it was canceled, including two aircraft that were in the process of manufacturing.
https://www.flickriver.com/photos/tags/linkehofmann/interesting/ 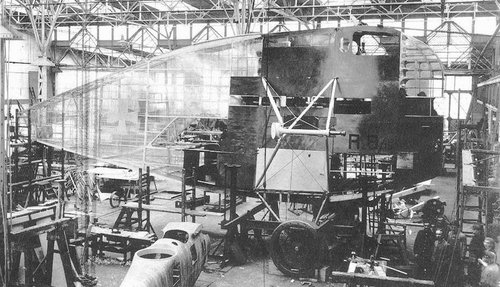 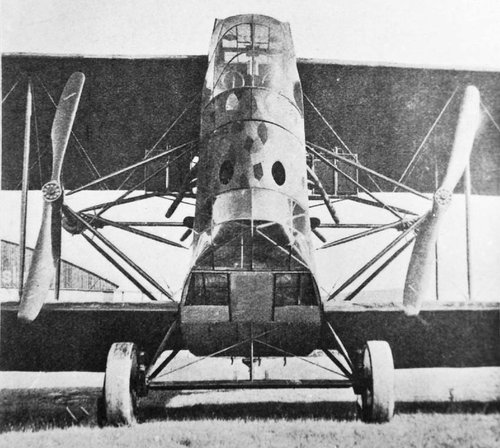 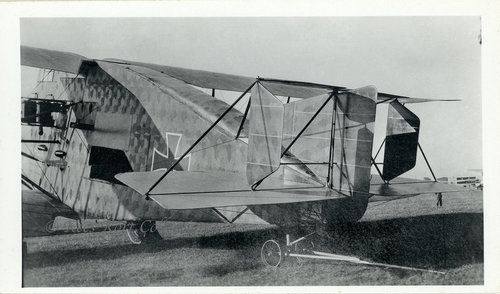 Thanks a lot Grey for your viewing as usual. 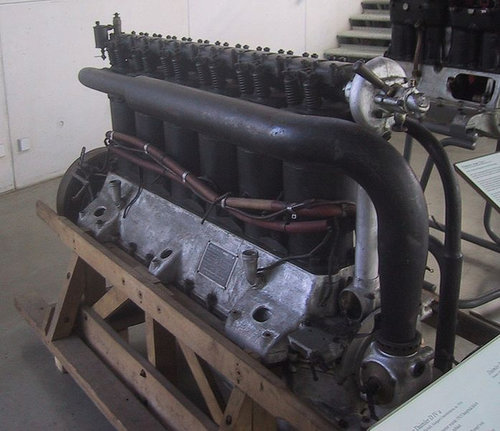