Perhaps someone has more infos about the Dassault proposal for the ECAT
competition, which was known as the Cavalier (not to be mixed up with the
VSTOL design with the same name) and which lost against the Br.121, later
Jaguar. It would have been powered by two GE J85 engines and was intended
to be built in a single seat attack version and as a two seat trainer.
I've attached the pictures I have so far, all showing the trainer version. Of
special interest for me would be a picture showing the undercarriage and the
single seat version. Was the Cavalier derived from another Dassault type, as
the Br.121 was a derivative of the Taon ?
(pictures from "Dassault-56 Years Of Aeronautical Adventure" and from
Flying Review 5/65)

pictures from "Dassault-56 Years Of Aeronautical Adventure"
Click to expand...

Are you lucky owner of a enlarged and updated edition of the book? I have only
"Dassault - 50 Years of Aeronautical Adventure 1945-1995" in my bookshelf ;D.

Good evening boxkite, do you remember, where I got to know this book ?
It was in Immenstaad, Gästehaus zum Hennenbrunnen ... ;D
I'm not even owner of hte older edition !
A

Was the Cavalier derived from another Dassault type, as
the Br.121 was a derivative of the Taon ?

I don't think so... The Taon was Breguet LWF in 1956, ok.
At the time, Dassault had no less than three series of LWF (early Mirages, early Etendards, and Mystere development). This thing doesn't look similar to one of the LWF fighters... IMHO, this was build "from scratch".

Knowing how Dassault design bureau is working, be sure that some features of this design went into the Alpha Jet 10 years later

the SA 125 was the Northrop F-5 proposed by Sud in 1965. In the same year, De Gaulle leaved the NATO, and that's why this project was pushed away by the French Minister. We have no details of this project in the archives .... but if somebody wants to draw the French F-5 ;-)

MIRAGE 4000 said:
the SA 125 was the Northrop F-5 proposed by Sud in 1965. In the same year, De Gaulle leaved the NATO, and that's why this project was pushed away by the French Minister. We have no details of this project in the archives .... but if somebody wants to draw the French F-5 ;-)
Click to expand...

Out of curiosity, were there any further ties between Northrop and Sud Aviation? I find it rather fascinating that Northrop seems to have been the most open of any US manufacturer to establishing ties with manufacturers in other countries.

Saw yesteday the SUD AVIATION drawings of the SA-X-125...

Did you by chance manage to copy the drawings? I'd be interested in seeing such a beast.

Dear Boys and Girls, here is a contemporary editorial in French on the proposals for the ECAT programme; the Bréguet Br.121, the Potez P-92 and the Dassault Cavalier......

The article comes from the 1st March 1965 issue of Aviation Magazine International......

Dear Boys and Girls, here is a article in French describing the change in design for the Dassault Cavalier ECAT candidate from T-tail low/mid wing to a high-wing conventional tail configuration......

The article comes from the 1st April 1965 issue of Aviation Magazine International......

Dear Boys and Girls, here is an article in French about the winning Bréguet Br.121 ECAT "project" which was developed into the SEPECAT Jaguar. I was surprised to see how much of the Jaguar is already there (the Jaguar is the only military fast-jet that I have any interest in; along with the similar Mitsubishi T-2/F-1). I cannot identify any Jaguar version that corresponds with the Bréguet Br.121B tandem 2-seater version illustrated that is not the Bréguet Br.121E; can anyone help please? Should I be posting this article in the Jaguar topic instead?

The article comes from the 15th June 1965 issue of Aviation Magazine International......

The source is the November 2010 issue of the French magazine "Le Fana de l'Aviation".

Are the dimensions known for the Dassault Cavalier?
T

I didn't see them. I can read them but I don't understand them. Perhaps I'm just too Anglophone. Can someone translate them to English for me?

Hello Gents, First post on this forum (should find the introductions section and tell my life story first really!)
I'm an ex Jag engineer who is researching towards a technical book on the aircraft including its development from AST362 and ECAT specifications. I have already got some info from the national archives on Jag development and will be getting most of what I can on another trip there in two weeks (holiday booked for that one!). I am planning to include the ECAT submissions in the text plus images, so this thread is a goldmine. Can anybody help with hi res images plus info on sources so copyright usage can be sought?
Please PM me. I'll drag out the basic French ECAT specs from the AST362 files I've got and post them..
S

Probably obvious but the Jaguar is certainly plain to see 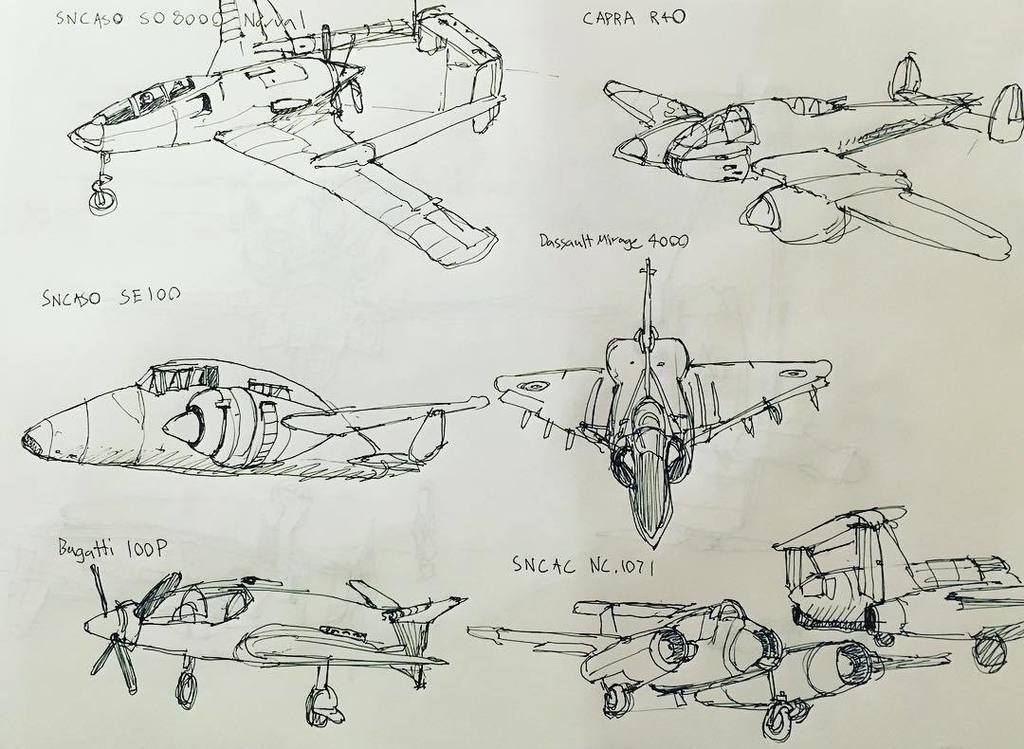 Few nations have killed as many beautiful aircraft projects as France. Several on this list were felled by the German occupation- some by France’s traditional dislike of heavy fighters- and s…

If we compare the SEPECAT Jaguar's design with the latest jet fighters, what aerodynamic shortcomings do we find in its design? (I'm only asking about aerodynamics, not AESA radars, electronics sui...

Jemiba said:
Dassault proposal for the ECAT
competition, which was known as the Cavalier (not to be mixed up with the
VSTOL design with the same name) and which lost against the Br.121, later
Jaguar.
Click to expand...

Oh wow, great photo of the mockup Jemiba
Can't say I've ever seen the Dassault Cavalier proposal before.
Thanks for bringing it to my attention.

The source is the November 2010 issue of the French magazine "Le Fana de l'Aviation".
Click to expand...

I'm no conspirationist by any mean. Really not my cup of tea. and this is 100% speculation from my little self.

In 1974-75 General Paul Stehlin was embroiled in a scandal when it was revealed he had been on Northrop payroll since at least 1964.
Before that, Stehlin had dropped the bombshell and made a fuss over the Deal of the Century - basically he said loud and clear that the YF-16 and YF-17 were far ahead of the F1-M53.
whether he said that because he was on northrop payroll, or not, fact is he was right, on technical ground. On June 7, 1975 he was proven right.

Now I'm wondering, Stehlin was enlisted by Northrop in 1964, and the date matches with Aérospatiale SA-X-125 proposal for ECAT.
Once again, fact is that Northrop N-156 somewhat succeeded where ECAT (= Jaguar) partially failed: a supersonic trainer become an excellent low-cost combat aircraft. The Jaguar failed as a trainer (hint, Alphajet, Hawk) it was expensive, and as a combat aircraft was less efficient than a F-5 (less a multirole fighter, more a ground pounder)

By 1965, a decade before Stehlin own troubles, a similar case had already happened.

Basically another Armée de l'Air (former) Général dared to suggest that
a) Dassault combat aircraft monopoly was bad
b) a public company / US licence-build aircraft / Breguet / whatever competitor - would help procuring combat aircraft at lower cost than the Mirage monoculture.

Things went quite ugly for that Général (can't remember his name), who was bashed by both Messmer and De Gaulle. Public companies were told to forget it, and churn helicopters, airliners, missiles, trainers, but not combat aircraft. I remember reading this story in Le Fana de l'Aviation pretty recently, but can't remember the Général name.

EDIT: Shazam. Général Puget. He was no longer at the Armée de l'air but the head of Sud Aviation. No surprise he was annoyed at Dassault monopoly on combat aircraft.

I made a quick search, Puget and Stehlin knew each others, by 1962 Stehlin was a little above Puget among the Armee de l'Air highest ranks.

All this is pure speculation of course.