No I think it used the Spz Neu chassis. But it and the HS30 look very like the sort of designs that appeared at the end of WW2. Henschel were in the same business.
see this thread

JFC Fuller said:
I have no idea how accurate the content of this link is, and I am reliant on the google translation to understand its content, but if it is accurate it gives a level of detail on the E-50/75 that I have not seen before. I took away the following points (that I may have misunderstood):

Hull: The armour plates used the same angles as the E100, so the tank would have looked like a scaled E100 with a (newly designed) turret mounted forward, ahead of the rear mounted transmission, steering system and engine.

Transmission: A single integrated unit would have included the two final drives, the gearbox and steering mechanism, all inside the rear hull and behind the engine. This arrangement saved 1 ton of weight and reduced manufacturing hours by 25%. The E-50 was to have a top speed of 60kmh versus 40kmh for the E-75, the gearboxes would be identical with the change being achieved by replacing a single gear on each side.

Engine: Maybach HL232, this used turbocharger powered by a 2 cylinder auxiliary engine that also served as a starter motor, it also used direct fuel injection instead of the carburettors used on the HL230. It was liquid cooled. Continuous power rating was 1,000hp but 1200hp could be achieved for short periods at 3200rpm. This was still in testing but the fuel injected HL234 was available in prototype form.

Turret: Krupp was designing the turrets, the E-50 and E-75 would have identical turret rings and both would use electric traverse, the weapons would be different though. [JFC speculation; they probably would have been similar to the Panther Aus F Schmalturm but designed round a wider turret ring and with a turret bustle for ready rounds, giving the appearance of a flat-topped (Henschel) Tiger II turret (also designed by Krupp).

The blog has lots of interesting articles, e.g. this one about the PulsGetriebe PP33 designed for the Tiger
Click to expand...

Thank you, a most interesting article, as is the entire Blog . . .

Ah my mistake then.

Also here is something on the E-50 and E-75's transmission from Hilary Doyle along with a few photos of documents: http://overlord-wot.blogspot.com/2012/06/wot-transmission-response-from-mr-doyle.html

No I think it used the Spz Neu chassis. But it and the HS30 look very like the sort of designs that appeared at the end of WW2. Henschel were in the same business.
see this thread

Sorry, what was the Spz Neu?

The answer and the following posts were moved to the dedicated thread about the HS.30
https://www.secretprojects.co.uk/th...es-derivatives-and-projects.6947/#post-196533

JFC Fuller said:
All of this combined gives us a good idea of how the E-50/75 may have appeared had it been built as conceived at the point at which the war ended. A Tiger II sized hull with the armour plates angled as on the E-100 design, external suspension with 6 road wheels on either side for the E-50 and 8 for the E-75. That just leaves the turret and gun, no other suitable weapon seems to have been in development and their was plenty of working space inside the vehicle (potentially more than the Tiger II), it therefore seems logical that the 88mm KwK 43 L/71 would have been the initial choice, probably with a similar or larger ammunition load out than the Tiger II.
Click to expand...

Having spent more time reading the reports written of Kniepkamp and Jenschke's interrogations in relation to the E-Series and measuring the various blueprints and diagrams available online something has become clear in relation to the above, the German's were intending to free up significant internal volume in the forward hull through several means:

One approach to using this volume would have been to reduce the overall size and profile of the tank to produce an overall smaller vehicle.

However, their design philosophy seems to have been very different and this is clear from the available hull drawings, the result would have been a Tiger II size hull with more useable space in the fighting compartment. That extra volume was to be used for firepower. This suggests at a minimum that the E-50/75 would have been able to house the 88mm KwK 43 with a large ammunition load out. It also means they probably could have used a bigger gun if they had wanted to. We know Krupp offered a 105mm L/68 for Tiger II in late 1944 and that this was rejected as it would require extensive modifications to the turret and sighting system and two piece ammunition that in turn would have required an additional loader. What I don't know is why it would have needed two-piece ammunition; if it was only a matter of internal space in the Tiger II (stowage racks, turret ring, space behind the breech etc.) it is still entirely plausible that a fixed ammunition version could have been used in the E-50/75 had it been realised. A 105mm weapon would have been the logical next step and AP rounds were test fired for that calibre. That efforts to squeeze the 88mm KwK 43 into the Panther were ongoing in March 1945, and the intention to include rangefinders on both Tiger IIs and Panthers all implies a continuing interest in being able to engage and defeat opposing tanks at long range, which would be a driver for a more powerful gun.

The 105mm angle is my speculation based on the surviving German material that references such a weapon and associated ammunition, that the E-50/75 were to emphasise enhanced firepower is not my own thought though - its captured in the upfront remarks in the report on Jenschke's interrogation.
Last edited: Mar 21, 2022

I know this could be seen as off topic perhaps but I'll go for it. We had two piece ammo in the Chieftain. Obviously we had a larger turret and hull but how much of a problem would it physically be to house two piece 105mm ammo in the Tiger Ausf B and why could a loader not manage loading them?

Obviously the Cent is a better fit but one piece ammo in those.
Last edited: Dec 4, 2020

RU251 is based on SPz neu, later evolved into SPz Marder.
I got a variation map for SPz neu family:

sgeorges4 said:
also caraktère is working on a book on the E serie for those interested in it
Click to expand... 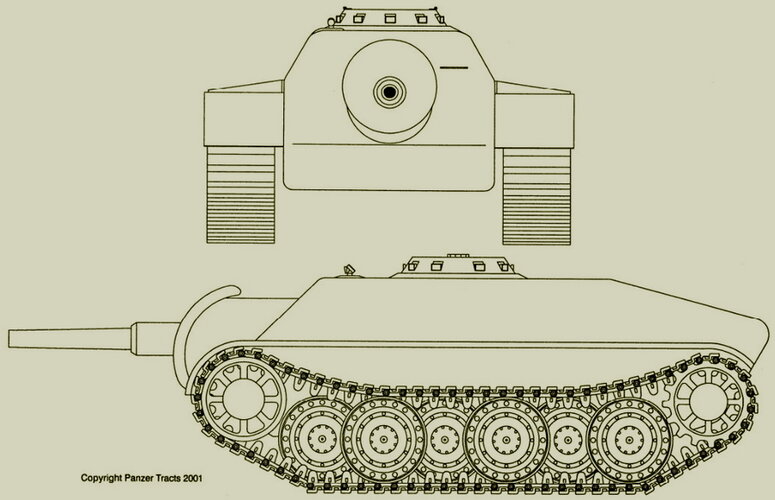 also caraktère is working on a book on the E serie for those interested in it
Click to expand...

The E5 Rutscher claim is from a book by Michael Frohlich, and it does make sense because the Entwicklungskommission Panzer was involved in the program - they restarted it on January 1945
Last edited: Dec 22, 2020
S

still wasn't part of the E serie though considering that he was called "panzerkleinzerstörer rutscher" on original document and source like panzer tract 20 on paper panzer wouldn't call it E-5 ,also the source I have on the kätzchen like truck and tank and Wehrmacht 46 don't mention the Kätzchen being base on the E-5(even if they call the rutscher E-5 ,wich will be corrected in their next book on the E serie ,I wroted this part for them by the way) ,and company such as CKD or BMM participated in the project +the supsension on some of the prototype was based more on panzer 38(d)

Data of German guns armour penetration, from 7.5cm to 17cm: 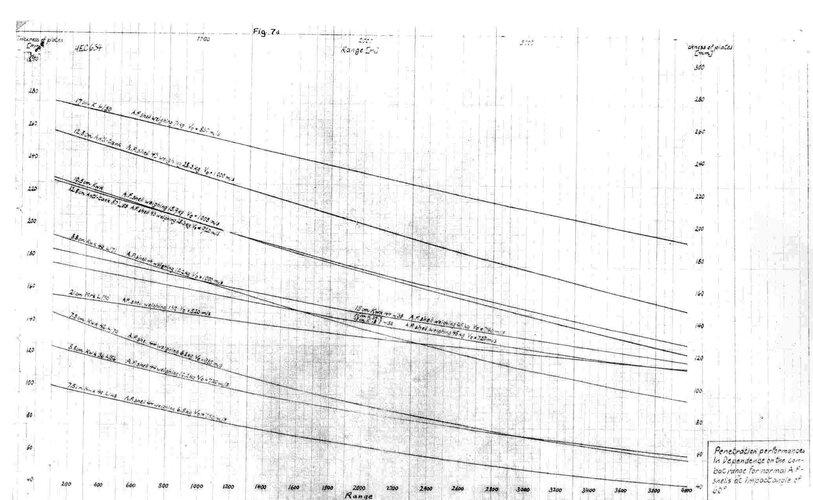 Hi,
were any E-Serie vehicles (or their components) produced or just E-100 chassis? I've heard, that there were some E-25 hulls...

I had a short email discussion with Mr HL Doyle himself and there is 'suspision' but no proof that there were three hulls at the Spandeau proving ground. Whether they were there for weapons trials as targets or anything else will probably never be known. No proof they were self motivated either. I would suggest that without repeatable and provable facts, this theory should be discarded until such time as evidence turns up. His view was that the E-25 had been cancelled and the units available for proper testing were Jagdpanzer 38D.

I'd ignored this detail from Karl Jenschke previously but now realise it implies a very differently shaped vehicle to every attempted reconstruction of the prospective E-50/75 that I have seen so far. Starting at the rear of the hull, the specific reference to upper and lower plates suggests a configuration similar to that on Soviet tanks (e.g. the IS series) with the upper aft plate sloping downwards and the lower aft sloping upwards, both at 45 degrees. This should be unsurprising as the vehicle was to have a rear mounted transmission. 45 degrees for the side plates is aggressive compared to the Tiger II and Panther but probably doable whilst the front hull profile would be very similar to the E-100. The Argus designed E-25 shows similar aggressive armour plate sloping. Another option for the turret, noting that it was Krupp designed, is perhaps something with similar angles to the Maus II turret, which had 30/29 degree sloping on the front and sides. Without the need for the large hatch in front of the turret to facilitate the installation and removal of the transmission the turret could be moved forward somewhat too, perhaps giving an overall appearance closer to the VK30.02 (DB) but with more aggressively sloped armour.
Share:
Facebook Twitter Reddit Pinterest Tumblr WhatsApp Email Share Link