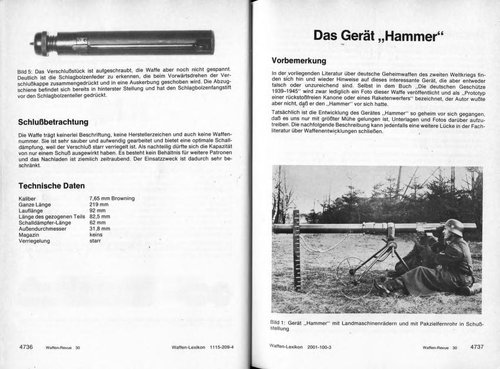 There are a couple sources that refer to the Hammer with Panzerschreck as an alternate name for the same weapon, despite it using a different operating system from the 8.8cm Panzerschreck.
Finally, it's worth remembering that Panzerschreck was originally just a nickname, not an official designation. The 8.8cm rocket launchers were officially the Raketenpanzerbüchse 43 and 54. If you think of "Panzerschreck" as a term applied to tube launched infantry antitank weapons, then it's easy to imagine the term being applied to the Hammer/Panzertod as well.
E

It is interesting that the Hammer Device has seen the light of day. Thank you for posting this.

BB1984 said:
Gander/Chamberlain's Weapons of the Third Reich list it as called "Hammer, also Panzerschreck and Panzertod"
Click to expand...

This is elaboration, not a source.

BB1984 said:
A very interesting translation of a late war German document about anti-tank weapon development also seems to indicate it was referred to as both the 10.5cm Panzertod and the 10.5 cm Panzerschreck (not using the term "Hammer" at all). It's available on Axis History Forum here.
Click to expand...

It is not written, the names 10,5 cm Panzertod and 10,5 cm Panzerschreck refer to the same weapon. These are just planned weapons with performance better than 8,8 cm Panzerschreck. The name Hammer was introduced around February 1945 only, as it is already used in documents from early March 1945.

BB1984 said:
Finally, it's worth remembering that Panzerschreck was originally just a nickname, not an official designation. The 8.8cm rocket launchers were officially the Raketenpanzerbüchse 43 and 54. If you think of "Panzerschreck" as a term applied to tube launched infantry antitank weapons, then it's easy to imagine the term being applied to the Hammer/Panzertod as well.
Click to expand...

BB1984 said:
A very interesting translation of a late war German document about anti-tank weapon development also seems to indicate it was referred to as both the 10.5cm Panzertod and the 10.5 cm Panzerschreck (not using the term "Hammer" at all). It's available on Axis History Forum here.
Click to expand...

BB1984 said:
Finally, it's worth remembering that Panzerschreck was originally just a nickname, not an official designation. The 8.8cm rocket launchers were officially the Raketenpanzerbüchse 43 and 54. If you think of "Panzerschreck" as a term applied to tube launched infantry antitank weapons, then it's easy to imagine the term being applied to the Hammer/Panzertod as well.
Click to expand...

It's not a question of imagination, it's a question of documented facts. Ofenrohr and Panzerschreck were OFFICIAL names of the weapon, Ofenrohr was even used before the 8,8 cm RPzB 43 designation was introduced, then the designation was changed from 8,8 cm RPzB 43 to 8,8 cm RPzB 54 before the weapon was put into service. The name Panzerschreck for the 8,8 cm RPzB 54 was present in official manuals as early as June 1944, also long before the actual Panzertod started to take its shape (December 1944 - February 1945).
Click to expand...

I wouldn't pay too much attention to such details. This text is a translation, no-one knows how reliable. For example, it could be used as a proof, the Panzerschreck was of the 8 cm calibre, not 8,8 cm.

BB1984 said:
That development was stopped and then re-started, just as with the agreed upon history of the Panzertod. Alternatively you have to believe that there were two separate weapons, of the same caliber, both with the same start-stop-start development history.
Click to expand...

It is an apparent consistency. The document dated February 9, 1945 says "Development is to be taken up again". The problem is, development of the Panzertod was resumed not later than in early December 1944 and the program was going full steam in January and February. For example three different carriages were built in mid. December, firings with an experimental barrel were conducted on February 21 etc.
I also do not understand, why I should believe, two completely different weapons (for example - 10,5 cm Panzerschreck fired full calibre projectiles, Panzertod subcalibre ones, PS rockets were two times heavier then PT, PS launcher was three times lighter than PT, PT range was nearly 2 times greater than PS) are the same weapon, just because you think their development history is a little bit similar?

BB1984 said:
There's some dispute about whether "RPzB 43" was an original designation or an interim term, but there were clearly two models: the original weapon did not have the protective shield introduced later.
Click to expand...

BB1984 said:
The question is whether the Germans also applied Panzerschreck to the Panzertod/Hammer at some point in its development.
Click to expand...

I see no point in asking such a theoretical question with no factual support. One can wonder if e.g. the Bf 109 was designated as the Fw 190 at some point of its development as well. The only clue is "weapon" instead of "weapons" in the AHF document, which is, sorry, completely worthless. It's just a translation of unknown quality, but first of all, such general, brief overviews, even in original German text, are often troubled with typos and smaller or bigger misinterpretations.
Last edited: Aug 6, 2019
L

IIRC another book claimed that Hammer got designated by Speer as the most important weapon development of all.
(Which doesn't mean much in the priority inflation of 1943-1945.)

It's in the book about german wepaons (incl. captured weapons). I'm in office now and can't look up the exact title.

Yep, it's the Gander/Chamberlain Small arms, artillery, and special weapons of the Third Reich.
B

I'd like to know more about the 10,5 cm Panzerschreck: do you have specifications? Where is the data from? I can't find any online mention of a 105mm version of the RPzB 54 nor do I recall one from a number of books that talk through German Anti-tank weapons, so I'm very curious about it.

The Hammer had indeed nothing to do with Panzerschreck (except both were AT weapons). Just re-discovered an old Waffen Revue (No. 113) issue. The Hammer shows up here too in a document (dating from 13th Febr. 1945) about the latest german weapondevelopements in 1945 (Heer, Kriegsmarine, Luftwaffe). This is mostly conerning the Rheinmetall-Borsig works since they were the biggest and most important weapons works. There are nearly 40 pages more intesting things, and some of them are metioned a bit more in detail (but very few) e.g. the Flak R 42 (p. 72). The Rheintochter R1 (same page) should begin trial on aerial/flying targets (BV 246) in March 45. It´s rocket engines was seriuosly considered for the Natter. The Hammer is mentioned on p. 74: it´s about production details and shoot trials. But interesting are the proposed follow-up versions: a) with a 10,5cm barrel and the 8,1cm Subcalibrebullet. b) with subcalibre 10,5/8,8 cm and c) with fullcalibre 10,5 cm. And the next item is another PAW device, the PWK 8 H63. I just metione it here, because not only the Heer was interested in it but also the navy. They wanted to use it on landing crafts (in 1945!!) to fire explosive shells during landings. 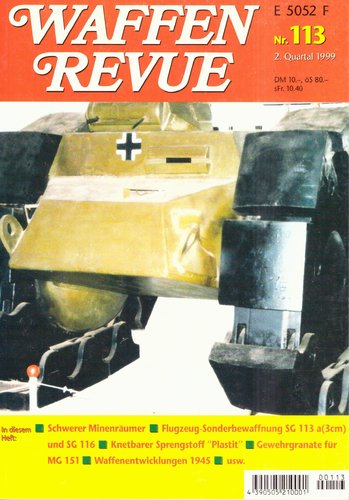 I finally dug through some of my old books and found a reference in Bazooka, by Terry Gander. He mentions that late war both the US and Germany had projects for larger Bazooka style weapons underway:
Unfortunately there are no pictures of the 105mm Panzershreck, meaning the upgraded version of the RPzB 54, but Gander does list it as being designed to fire a 6.1kg rocket to 300m range. The launcher would have been 2.4m long. Interestingly, penetration is only listed as 220mm (angle not specified).

So apparently two programs, both very late war, neither of which saw service. The Hammer, however, was at least made in prototype form while we don't seem to have any evidence, at least so far, that the upsized RPzB 54 was actually built. So that's one unanswered question: were there any actual prototypes of a 10.5cm version of the RPzB 54.

The other unanswered question is whether or not the term "Panzershreck" had, by 1945, become a generic term for multiple types of weapon, much as the term "RPG" can refer to multiple weapons with similar battlefield roles but very different methods of operation. To make things even more confusing on this point, there's a reference on a different Axis History page, here, mentioning the Hammer; that page says: "There is some detail about it in T. J. Gander's "Field Rocket Equipment of the German Army" (1972). The new equipment was the 10.5cm 'Panzertot', other names used were 'Hammer' and P'Panzerschreck-kanone'."
You must log in or register to reply here.
Share:
Facebook Twitter Reddit Pinterest Tumblr WhatsApp Email Link
Top