Germans fielded a number of airborne AT rockets in the winter of 1944/45. There were Panzerschreck 1 and 2 and Panzerblitz 1 and 2, while Panzerblitz 3 and 4 were in development. Sadly, there's an incredible mess in available books as far as details of these rockets are concerned - e.g. I encountered FOUR completely different descriptions of the Panzerblitz 3.

Specimens of the R 4 rocket with a Panzerschreck wearhead are pretty common now, other versions are not - this may suggest they were Panzerblitz 2 indeed.

Are there some definitive materials, (preferably German documents ), which could finally clarify this?
How Pb 2, Pb 3, Pb 4 and Panzerschreck 2 rockets looked like?

Thank you, Justo, that's most amazing!
I have to spend some time now to read it all carefully.

There are some things that puzzle me, though. I've been interested in German AT weapons for some time, but I've never encountered any information that RPzBGr 4992 differed so much from the RPzBGr 4322. It's always stated, only the fuel charge was changed.
I've also encountered a mention in a Soviet book about a Shlange HL - I have no Idea it's reliable.

I have found some sources
R4MP from "Secret Messerschmitt Projects" by Willy Radinger & Walter SchickLoading...

I have found some sources
Panzerblitz...four?
From "Deutsche Geheimwaffen" by Fritz Hahn Erich Hoffmann Verlag

Thank you again, Justo!
It seems, Hahn's book is the source of the 130 mm Panzerblitz 2.

By the way - I have a German edition of Messerschmitt Geheimprojekte and I think there are no these drawings of R 4 shaped charge warheads. But they are included in Hogg's book on German secret weapons.
The RPzBGr 4992 warhead is still a mystery for me.

My mistake
Of course R4 is from "German Secret Weapons of the WWII" by Ian V.Hogg

I saw some photos a while back showing rockets mounted on light aircraft, trainers and even !gliders! as part of the last ditch anti-tank effort in 1945. Does anyone have more information about this?
J

I put some of the AT rockets together...
The Hahn's drawing isn't too accurate - the warhead is much too big (approx. 18 cm calibre) so I scaled it down... The R 4/HL with Panzerschreck warhead is shown faired, while the Schlange HL is still a 'what if' impression - I have nothing confirming its existence save for a single mention in a Russian book.

Hi Grzesio
Excellent drawing!
I have found this drawing on the SG118 where it can be seen that it is a recoilless weapon , unrelated to the "Block 108" system , as mentioned in all the texts I have.
Do you have any additional info on this?

Justo Miranda, thanks. Do you know anything about how they were deployed? There is something fascinating about such last ditch attempts.

The SG series were multi-barrel recoiless mortors that would fired obliquely into the undersides of bombers (apparently often using a photocell). I remember there were different versions suitable for use on the Bf-109, Me-262, Me-163 and others. There was also a much larger system that used a similar principle against tanks (tested on the Hs-129). I have no idea if there were ever forward firing versions of the SG series (if anyone has information on this It'd be interesting).

These complex rocket launcher systems shown earlier in the thread are fascinating, though.
R

ı remember seeing a system drawn for FW-190s . Called Forester's Probe it looked impressive and Germans tested similar rocket boosted munitions in the 80's to be used against tanks on AlphaJets .

The "Förster Sonde" wasn't the whole system, I think, but only the sensor, named
after its inventor Friedrich Förster. It's a sensor, which detects metal objects via
their magnetic field.
S

are these panzerblitz or panzerschreck? 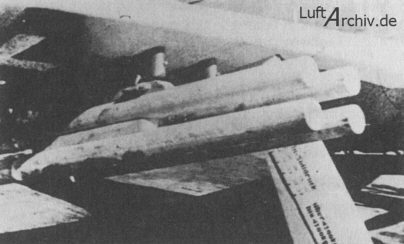 The link you included tells you.

So, as far as the original question is concerned after some years have passed...
Panzerblitz 1 = 8 cm RSprgr with a shaped charge warhead;
Panzerblitz 2 =R 4 with a Panzerschreck warhead
Panzerblitz 3 = R 4 with a shaped charge inside the original R 4 M warhead shell (prototypes only).
Justo's drawing of the 8,8 cm RPzBGr 4992 based on Lusar's book is sadly completely inaccurate - the rocket was identical as the 8,8 cm RPzBGr 4322 as far as its shape, dimensions and fuel charge are concerned, the only difference being a contact ring of the ignition system on the drum stabilizer. Most probably never put into production.

One more mistake has to be noted in the Justo's scans. RA 55 or Raketenautomat 55 launcher for the R 4 M was a belt fed automatic launcher with a single tube, roughly similar to the MK 108 cannon, not an external 19-shot container shown in the Me 262 drawing.
Last edited: May 14, 2019
S

anything regarding the panzerschreck 2? (Ps 2 in the eduard manual page 12)

I wrote a brief note on the Panzerschreck 2 on a Polish web site back in 2002: https://web.archive.org/web/2004122....bialystok.pl/~hess/r_lpn_panzerschreck_2.htm
Generally, according to information available then, it was a variant of the Panzerschreck with max velocity increased to 240 m/s (I wonder how?). Double or quadruple launchers were mounted on ETC 50 or ETC 71 racks of Fw 190 F, carrying 8 rockets. First tests took place on Udetfeld in October 1944 with Fw 190 F-8 (CM+WL). Night trials were conducted by EKdo 26 between December 11 and 17, but rockets were invisible in flight due to lack of exhaust flame and could not be observed. Small number of PD 8,8 made it to operational use.

I'd have to check if any new information surfaced since then...
S

thanks and what variant of the fw 190 /Ta 152 were considered for that one?

No idea. I think, if the PD 8,8 was used at all, it was used very briefly - so the Fw 190 F-8 would be the most appropriate. I think R 4 M and its derivatives became standard in 1945, so older rockets (whatever this PD 8,8 actually was) were phased out of service.
And things seem to be even more complicated - for example, a 2x12-shot 5,5 cm standarised rocket launcher for the Fw 190 from March 1945 could be loaded with R 4 M, "Panzerblitz (PS)" and "Panzerschreck (R 4 HL)" rockets; I just wonder, what rockets they meant under these designations.
Generally in March 1945, rocket armament (Panzerblitz and R 4 M) was planned for practically all current Fw 190 A, D and F variants, plus Ta 152 C-1 and H-1.
S

and what about the panzerschreck? Do we have something at least on the dora?
and here is the report for the panzerblitz/r4M:

better pick for that panzerschreck: 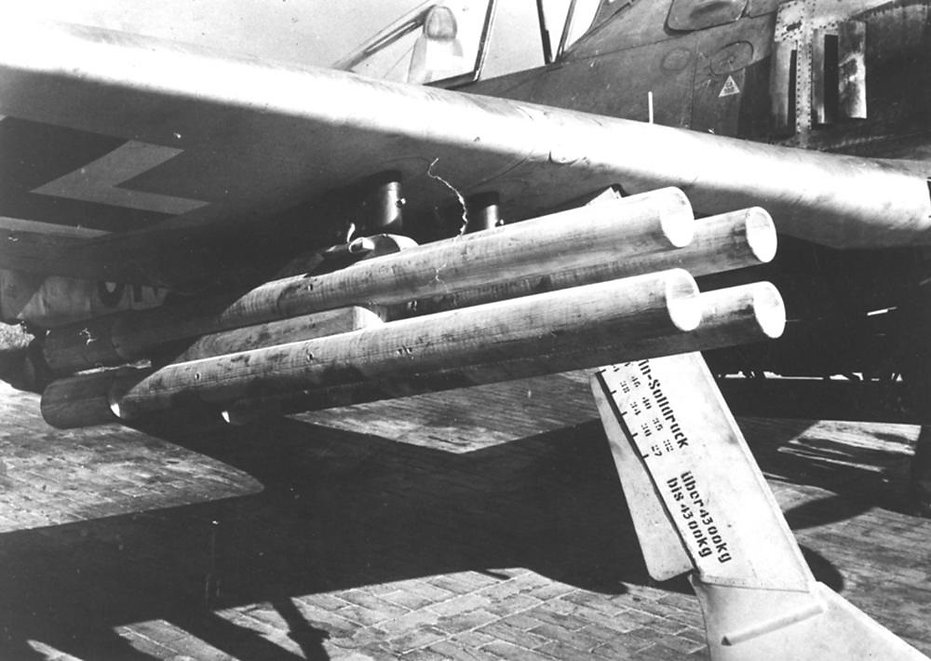 ... and these are just wooden mock-ups.
S

I know and those who were used for the black 11 seem to have different arrangement: 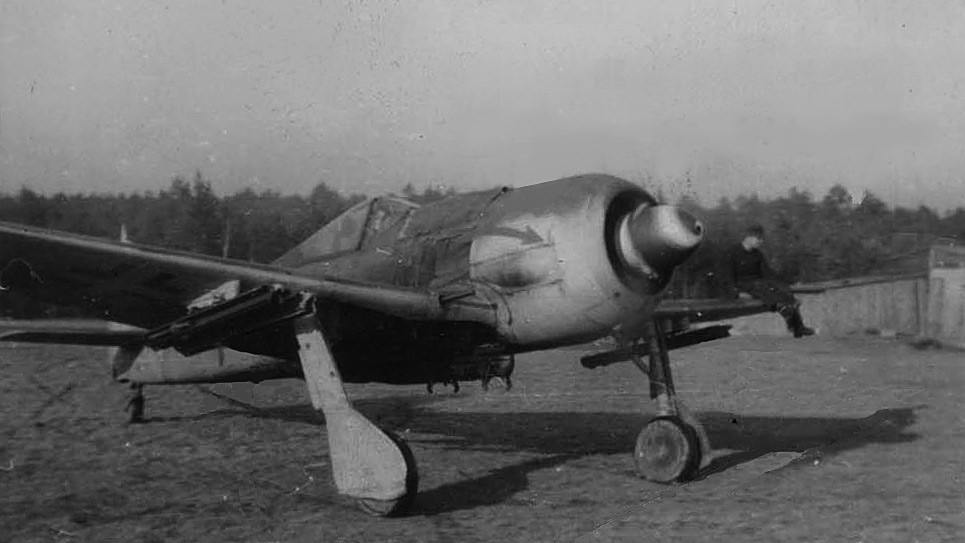 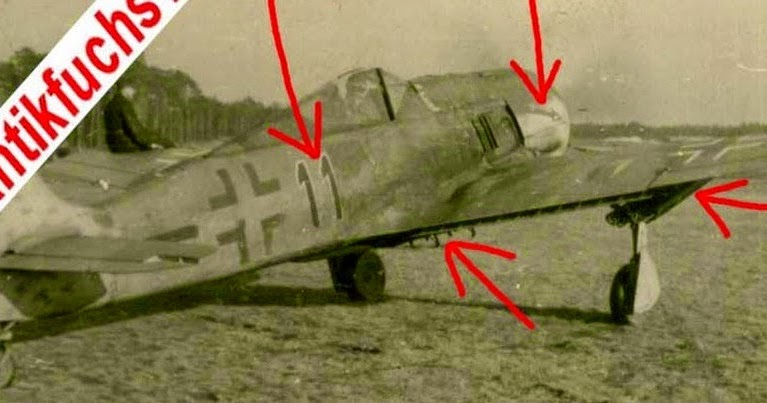 I was only discussing the subject of II. Gruppe SG 77 Panzerschreck toting Fw 190s with Jes Touvdal recently - here is his comple...

The following is in German but may help. 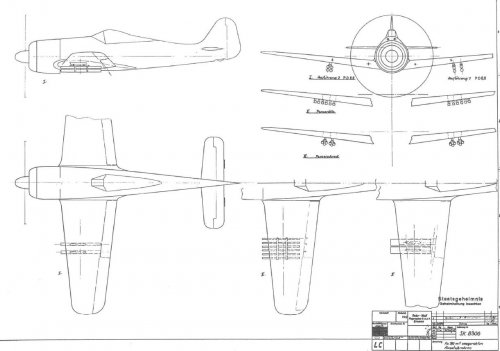