An early study for a defensive turret in the Mosquito.


also with anther turret cannon,but this aircraft was built.

Indeed, the aircraft was buildt, but the turret added just as a mock-up. So it probably never
flew in that guise.

That's just a mock-up of the Bristol B.11 Mk.1A (the Mk.1 was planned for the Beaumont light bomber) turret with 4 x .303 inch guns. The Boulton Paul proposal is interesting as twin .50 cals in a remotely controlled barbette suggests it is a relatively late-war proposal. 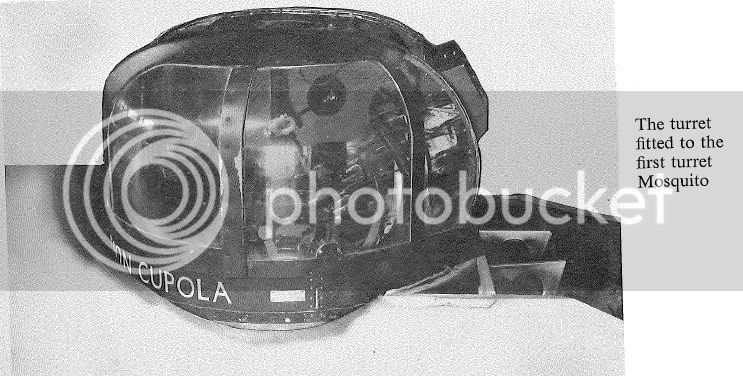 They briefly flew a Mosquito with a mock-up turret. The turret considerably slowed the Mosquito and created turbulent airflow over the rudder. Even stock Mossie's had poor rudder control at landing speeds.
R

That photo of a turret mock-up looks like the photo in the old "Profile" series of booklets.

The same page had a photo of speed brakes. They completely encircled the fuselage - just aft of the wing - and opened like an umbrella. Speed brakes were intended to prevent Mosquito night-fighters from over-taking their prey.

Another series (Secret Fighters/Projects of the RAF?) contains both a description and a small model of a Mosquito successor powered by Rolls Royce Griffon engines. The model has a completely different wing, with straight trailing edge and slightly swept leading edges.

This space has been intentionally left blank.

dont forget your source...but we know this source...I don´t know that you are allowed to post this picture from source... B) B) B)
P

It wa a 1942 project : http://www.militaryfactory.com/aircraft/detail.asp?aircraft_id=1716

On an interesting tangent: http://www.telegraph.co.uk/news/2017/08/06/discovery-lost-ww2-mosquito-plans-will-allow-wooden-wonder-fly/
N

On the subject of Mosquitoes armed with gun turrets, I did some fact finding on this subject and saw this image (see attached) outside The People's Mosquito stand at the Shuttleworth airshow a couple of years ago.

There were two Mossies that appeared like this, the fourth prototype W4053 and W4073. Following a decision not to employ the turret fighter Mossies, both became the prototypes of the T.III. The following is from an article I wrote for a local magazine and had published a couple of years ago:

"Flown out on the gently sloping, but barely suitable for flying operations paddock that was being used to save lengthy dismantling and reassembly time, on 14 September W4053 left for Hatfield with an actual B.11 Mk.1 turret installed. The first turret fighter’s debut could not have been more inauspicious, as a part of the cupola broke off during the short flight.

During flights to assess the turret’s operation, a rather disturbing defect was discovered. With Geoffrey de Havilland Junior flying, engineer Ted Lovatt in the right-hand seat and John de Havilland in the turret, when an attempt to rotate it to a position with the guns facing forward was made, the turret froze mid rotation, refusing to move. After two subsequent flights with the same result, personnel were prevented from flying W4053. The cause was the force from the slipstream on the moving turret overpowering its hydraulic motor, preventing it from rotating any further. This was a considerable fly in the turret fighter’s ointment, as in flight, the gunner would need to rotate the turret forward to get out in an emergency. In the Mosquito, access to the turret was from the exterior only, there being no internal ingress.

On 5 December, W4073, the second turret fighter flew for the first time, but was shortly delivered to Boscombe Down, Wiltshire, where the Bristol turret and modifications to accommodate it were removed. This is because following the findings of W4050’s aerodynamic trials in late July, the Air Ministry had rejected the turret armed Mosquito."

The prototype W4050 is pictured above in post #3 with the mock-up turret and the last time I was at the De Havilland Aviation Heritage Museum I asked the guys restoring it about the turret mods. Because it was an unmoving mock-up, there were locating lugs that still survived beneath the skin. They've been retained, but they did point out a faint rubbing mark on the canopy that is a remnant from the turret trials (see attached).

"In the interim, W4050 was fitted with a fixed aerodynamic mock-up of the turret installation in July 1941, and flown by R.M. Clarkson, made its first flight with it on the 24th of that month. A commonly reproduced image shows a close up of W4050’s canopy from the left side, with the mock-up turret visible with its ‘guns’ at their maximum elevation facing forward. Dummy gun location holes in the turret side are clearly visible, as is the tunnel fairing encapsulating the after section of the cockpit canopy.

W4050’s wing structure was not altered to accommodate the turret, as it was intended in the production turret fighter. At the time, the prototype was undergoing numerous aerodynamic trials, including the effects of stalling, as it was fitted with leading edge slots, which were eventually closed and not fitted to any other example, flying with the bomb doors open and localised airflow around critical areas. As the turret was not operational, the dummy guns were removed and placed in the holes located in the turret body to simulate their aerodynamic impact facing in different directions, with the bomb bay doors open and closed.

Handling during these experiments was found to be satisfactory overall, which was a good omen for the projected turret fighter, but 20mph was lost from the prototype’s exceptional performance without the turret and a higher landing speed was recorded. During trials, the four dummy guns were faced fore, aft and to the left and right, and speed measurements taken with each direction they faced. Aligned aft, a true airspeed of 352mph at an altitude of 14,050ft was recorded. To the side, 334mph at 14,050ft was reached and 337mph at 14,000ft with the guns aligned forward was attained. Handling was also assessed with the guns raised to their maximum elevation, no adverse effects were noted. These figures illustrate the degree of variation in speed – and the penalty the turret’s operation imposed on the aircraft’s performance."

On the subject of Mossies, I thought y'all might be interested in these pics I took a good few years ago. They aren't the best as I had a crappy little digital hand held at the event.

​
In 1943 the Finns were waiting to receive two crashed British de Havilland Mosquito, requested from Germany to serve as models for planned production. One would be repaired and another one would be teared into parts to make blueprints. The Finns are great wood workers and probably would have been able to circumvent the unavailability of balsa and Tego-film, with the technique used by the Soviets in the construction of the Polikarpov I-16, which already had been tested in the Pyörremyrsky. The Polikarpov fuselage was built in two halves, like the Mosquito, and each half comprised pine frames and longerons. The monocoque skin was produced from layers of birch strips glued cross-grained and molded on a former.

The new aircraft, called Vihuri, would have possibly been used as fighter-bomber with nose-mounted machine guns. It would have been powered by two 1,475 hp German Daimler-Benz DB 605 AC engines and used the landing gear of the Bristol Blenheim. It was estimated that its performances would have been inferior to those of the Mosquito because of its greater structural weight. Production plans would have delivered between mid of 1946 and December 1947, due to the overload of work that represented for V.L. the repair of fighters in service, the production of the Myrsky and the Mörkö-Moraani conversion.

A drawing of the jet propelled Mosquito, from FlyPast, June 1991. I include the short text describing the drawing. 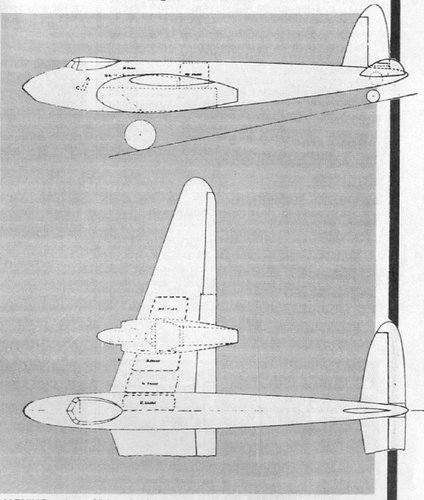 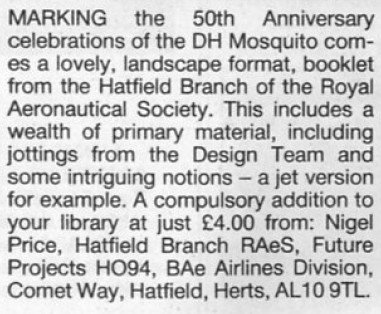 Some actual drawings have been discovered of the Jet Mosquito only a few years ago, along with drawings of the DH.101 and DH.102. They have been left in the care of Tony Butler. I've got a copy of the DH.101 drawings which Tony gave to me while I was figuring out the actually size of it. An announcement of the discovery was made in the Spring 2005 issue of Air-Britain's AeroMilitaria.
Last edited: Feb 11, 2020
J

That last one, #637 looks like one of Joe Cherrie's models.

It is (built for Tony Buttler's BSP book). The photo was taken at the IPMS UK Scale Modelworld 2005 show at Telford. The source:

The yellow one was built by 'Balsabasher':

Thanks for those, much appreciated.
J

Valmet Vihuri (Not the same as the trainer.) 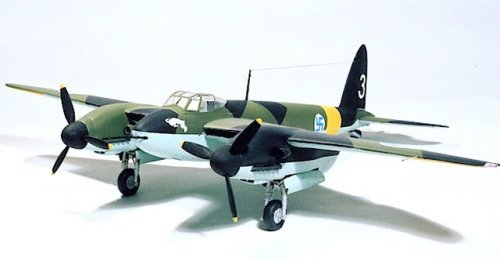 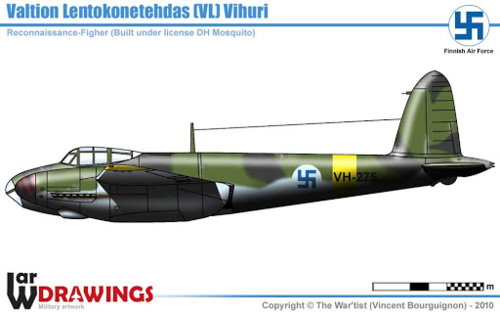 Not exactly sure about how it was supposed to look, so if someone could fix the discrepancy in looks between the first and third pictures in regards to the second it would be much appreciated.
You must log in or register to reply here.
Share:
Facebook Twitter Reddit Pinterest Tumblr WhatsApp Email Link
Top