A few years later Richard Schon derived improved version HC-3B that differed with thinner fuselage, two seat cockpit (one after another), ski gear, aerodynamic cover of rotor head and on the bottom of the fuselage machine gun.

HC-4 originated in 1967 - 1971 era and was made by Jaroslav Tekl. It had two two-barrel machine guns in the front part. During targeting it was necessary to move the whole helicopter. Third gun was placed on circular hanger in the rear part and was able to fire backwards, down and to the sides.

There was also armored attack variant of multipurpose VK-4 with M 601 H engine, but I have currently no information or picture of that.

Attack modification of Mi-1 from 1976 born in cooperation of Zdenek Pondelicek, Richard Schon and Ing. Ladislav Benes. Attack version of modernised czechoslovakian Mi-1 with domestic engine placed just behind the pilot, with lower weight, smaller height and rocket launchers on both sides of the fuselage.

Very interesting and appreciated, looks like they focused on flying cranes for quite a while. 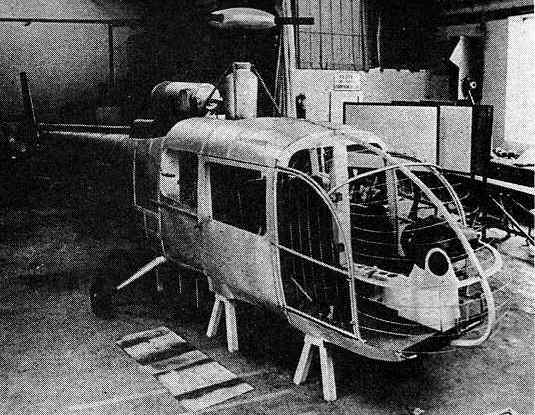 The HC-7 project does have its own website too. Its address is http://www.aviastar.org/helicopters_eng/czech_hc-7.php.

Might also want to take a look at http://www.nadc.cz/bongo. Project was stillborn due to lack of funds and over-optimistic development capabilities.

Very, very interesting!!
The poor Czech's have always been excellent and talented designer's in the relative short period of time they have been around! Unfortunately, history and world events doesn't seem to want them to prosper - German occupation, Soviet occupation and then the country's break-up ............. ???
I often wonder where Czechoslovakia might be today in terms of civil and military designs, manufacturing and exporting, if these two dramatic events never happened

Pioneer said:
Very, very interesting!!
The poor Czech's have always been excellent and talented designer's in the relative short period of time they have been around! Unfortunately, history and world events doesn't seem to want them to prosper - German occupation, Soviet occupation and then the country's break-up ............. ???
I often wonder where Czechoslovakia might be today in terms of civil and military designs, manufacturing and exporting, if these two dramatic events never happened


in early 1980s,my father went to many contries,and saw a large basis of industry,and exceeded on any east
Europe countries by that time.
B

They had the industrial heritage, being the largest manufacturing region of Austro-Hungarian empire. Kingdom of Yugoslavia bought a lion's share of it's armament from the Czechs and they in return bought raw materials from the Balkans. Both were part of little Antante, with Romania. Their craftsmanship was held in high esteem in Yugoslavia.

Pioneer said:
I often wonder where Czechoslovakia might be today in terms of civil and military designs, manufacturing and exporting, if these two dramatic events never happened
Click to expand...

I am Polish and I can read Russian but not Czech.

does anyone hear about this Czech DX-3 helicopter ?.

That scheme depict a general layout of a modular utility autogyro similar to Ka-26 (which was obviously a helicopter). It serves only as ilustration to the text discusing uses of such machine (relevant text is in the next part of the article in 1966/13). Next part has similarly "conceptual" ilistrations of light tourist autogyro and turbine-engined future autogyro.
DX-3 was an autogyro built by the authors of the article. They founded a Svazarm club (Svazarm - Union for cooperation with the Army, organisation analogical to Soviet DOSAAF containing all clubs dealing with hobbies with possible military use, like electronics, flying, even model building) at the premises of Moravan company in Otrokovice (more famous as Zlín Aircraft). Part two of the article (L+K 1966/02) mentions more details about the construction and flying tests, the rest of this serial deals with autogyro theory, construction, flying etc.

you feel the drawing differs from previous drawings to HC-4.

here is a helicopters No.1,No.2 & No.3,designed by Mr. Eduard Steiner.

here is a single seat helicopter prototype,designed by Mr. Karel Horak in 1950.

The power-plant of the Maier helicopter. There are two single-cylinder engines, each driving a three-blade propellor. I suspect the conical thing above the hub is the fuel-tank, which avoid the problem of trying to feed petrol through a rotating bearing. It does not look big enough for very long flights... One of the largest rotorcraft sites on the web with over 1000 pages complete with photos, videos, development history, data, etc. for helicopters and other rotorcraft from around the world.

hesham said:
The power-plant of the Maier helicopter.
Click to expand...

In September 1942, Major Josef Crha accepted two new students, Jiří Maier and Antonín Livers, to the Aero company trade school. In 1944 Maier constructed a tiny gasoline-fueled aviation engine made from dural-aluminum alloy developed by Livers. Impressed Crha ordered twenty more engines to be made as gifts for various important people. Right after the end of the war both boys togeher with Jan Plachta joined the army under a six-year contract and started teaching at the new School for aviation youth Crha founded in Liberec. Maier and his friends decided to made a helicopter, for which they salvaged anything remotely useful from the German wrecks and warehouses at the Liberec airfield. For working place they used old barn in the garden of a house of Maier's girlfriend family. In 1947, the Ministry of defence decided to forgave all instructors the remaining years of service, so they were free to go civilian or join the army under new contract. Livers and Plachta joined again, but Maier decided to leave army so he could marry the girl and finish his civilian glider training. He started working at the POL factory, where his new boss, former bomber from a Czechoslovak squadron in the RAF, allowed him to continue working on his helicopter using the factory equipment. In late 1948 the helicopter managed few short hops, but the engines mounted on the main rotor were too weak. Even with weak engines, he managed to gain altitude of 20 meters and the helicopter behaved like his calculations predicted. Maier had plan for development with stronger engines, but the needs of his family forced him to offer the prototype to various aviation companies. None showed interrest. In 1951, Maier moved to Teplice to a new job, and sold his helicopter for scrap.