I was reading Vickers Aircraft Since 1908 and it mentioned a disposable engine for advanced bomber project in 1951 for Vickers SP1. There was no details

I checked Tony Buttler's projects and if it is there, I missed it.

Does anybody have any information?
D

The 'SP' project nomenclature in vickers projects is very mystifying; projects were generally given a 3 digit number. The SP projects I've seen were not mainstream developments, but appear to be either Barnes Wallis pipe dreams or weapons?

The 'SP4' is reported on the internet to be an Avro 730 contemporary, but is outside the design ethos of Vickers of the time (1954) and had a single pilot when the V Bombers had a crew of 5?
A

Hi ,
By chance I looked at an example last week, a very compact engine similar thrust to the early jets but about a tenth the mass and only designed about five years later.
There was a picture of an American missile or drone with the same engine, but do not recall the details. but will check next visit 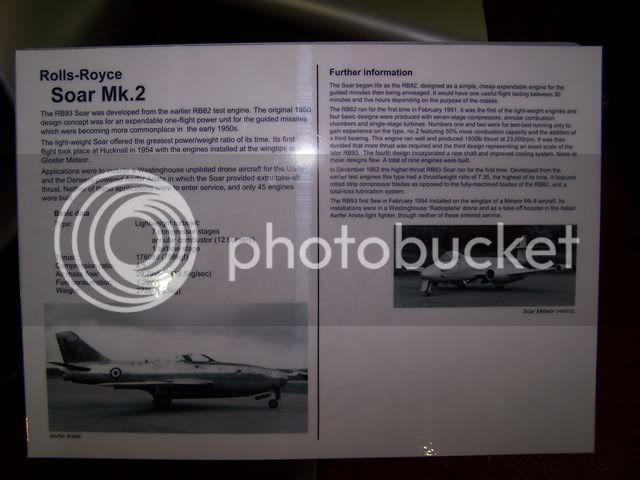 A little more information on the RR Soar from RRHT Derby. Not sure what Westinghouse drone the text refers to. AQM-34 or -35 are around the right size and time.

Correction to my first post it was a Vickers SP2 short-range disposable bomber. I did some research on that it was a comtemporary of the Bristol Red Rapier Type 182.

The Vickers Red Rapier was the "Type 725" or "SP.2" and it was simple to the point of crude in its appearance, the design concept being to make it as easy to produce and cheap as possible. The Vickers 725 Red Rapier featured a spikelike fuselage; a rectangular wing perched on top of the fuselage; and a swept tail assembly, with a small turbojet mounted on the tip of the tailfin and on the ends of the tailplane, for a total of three engines. The planned powerplant was the Rolls-Royce Soar turbojet with 7.8 kN (795 kgp / 1,750 lbf) thrust. Length of the Type 725 was 13.8 meters (45 feet 5 inches), span was 9.75 meters (32 feet), and the launch weight was 5,445 kilograms (12,000 pounds). Construction was to be of cheap soft steel, mostly in the form of sheet metal.

Thanks for the assistance.