Look at the trailing edge of the dotted and solid airfoil section in the drawing.

If the dotted is at the root and solid outboard of that then there is some trailing edge sweep and anhedral going on - very weird and unlike any planform the 190 had or anything focke wulf did at that time.

But assuming that the dotted section is outboard and the solid is at the root then it makes more sense. If the trailing edge has the same forward sweep as on the v1 and production 190, then the dotted section would be at the same location as the gear in the normal and v1 190, and would indicate something very similar to the p-36/40.
S

Let's think like Kurt Tank, FW-190 chief designer - what reason would be important enough, to change the layout of undercarriage retraction?

My guess is that:
1) wing' inward section could be filled with much armament. To made main spar more strong (with all this barrel's holes), leg could be retracted a-la P-40
2) some bombs or auxiliary fuel tanks were long enough, that it should be placed with their tips forward to leading edge, and conventional retraction prevents it?
3) wingspan changed so dramatically, so legs rotating axis goes far outside the fuselage - and became too short to provide wheels accommodation inside the fuselage?

Just my pure speculations, of course - and I'm looking for a noter SPF' members ideas!

P.S. At least we knew, that this drawing didn't materialized in any build version, except of the ones, equipped with upper-mounted fuselage MGs

Have you got drawing from the earlier version of this Jäger?

Some images of the 183 and related developments I've never seen before, from here;https://forum.warthunder.com/index.php?/topic/319091-focke-wulf-ta-183-huckebein/

I might have seen the wind tunnel model being admired by these gents in the photo...

Around 1983 the University of Florida had a career fair. The Aeronautical Engineering department had a table, which was dominated by a wooden Ta-183 model that looked just like that one. The student manning the table didn't know anything about it. Now, the model's age was not apparent. It might have been a student project or part of a thesis or something, but, in 1983, there was not wide awareness of this project, nor had I seen the factory drawings that have been published since. It might be coincidence, but, at that time, Hans von Ohain was a visiting professor.

sienar said:
Some images of the 183 and related developments I've never seen before, from here;https://forum.warthunder.com/index.php?/topic/319091-focke-wulf-ta-183-huckebein/
Click to expand...

The two Focke-Wulf drawings are from AIR 40/2005 at the National Archives in Kew - the handout report for the 1-TL-Jager meeting which took place at the end of February 1945.
S

Thanks a lot. Surprising document!!
Explanation of this document says that.....

"Exclusively at DeutscheLuftwaffe.de we provide you with a long-range bomber study
The Focke Wulf aircraft construction A. G from the year 1936 ago!
A reflection on the development possibilities of a long-range bomber, the title of these original documents.
The reason for these investigations was "-the need to create an effective long-distance assault weapon!"
The search was then made for a weapon platform that would allow a bomb load of 1,000 kilograms to reach its destination over a 6 ' 000 km flight.
It is astonishing that these documents already write about the possibility of printing suits, as this development is already being observed in England. It is also important to read pressure suits instead of the pressurized cabin at large altitudes.
Unfortunately, the long-distance bomber project did not have a project name because it was a study of the development possibilities! Only the portfolio had the race number No. 6401/RLM 781."

"Bomber Development in Germany
The German air Force developed the military concept of Allied weapons in the years from 1935. This means that the army and the Air Force are closely connected by the Luftwaffenverbindungs leadership officers who are on the ground with the army units. This approach requires precise planning of the fight against military targets. For this reason, the military leadership left only two twin tactical bombers, e.g. the Ju 88 build. From 1940 to 1941, German bombers attacked the southern parts of the United Kingdom to prepare for an invasion of the so-called air Battle of England. In the end, however, the limited range of the escorts and the high bomb losses led to the 1941 attacks being largely halted.
Focke Wulf
Focke-Wulf-Aircraft Construction AG (AB 1936 GmbH) was a German aircraft manufacturer from Bremen. The company, which was founded in 1923, merged 1963 with Weser-aircraft-Construction GmbH into the United Aviation Engineering Plants (VFW).
Remote Bomber project of 1936"

blackkite said:
Thanks a lot. Surprising document!!
Explanation of this document says that.....

"Exclusively at DeutscheLuftwaffe.de we provide you with a long-range bomber study
The Focke Wulf aircraft construction A. G from the year 1936 ago!
Click to expand...

Not really an exclusive when all the drawings and several pages from both documents were published seven years ago by Hans-Peter Dabrowski and Peter Achs in Focke-Wulf Fw 191 Kampfflugzeug und das Bomber B-Programm. An excellent tome, btw.
S

This appears to have been the Fw Volksjager pitch. The existence of that design somewhere else can't be ruled out but if it does exist it's presumably only as a sketch.

I agree , only as a sketch.

Dan, a "never seen before" again!
Thanks!

NB: None of these designs was ever known as the 'Fw 251' - this seems to have been a later 'fudge' by those struggling to understand Focke-Wulf's project numbering system. 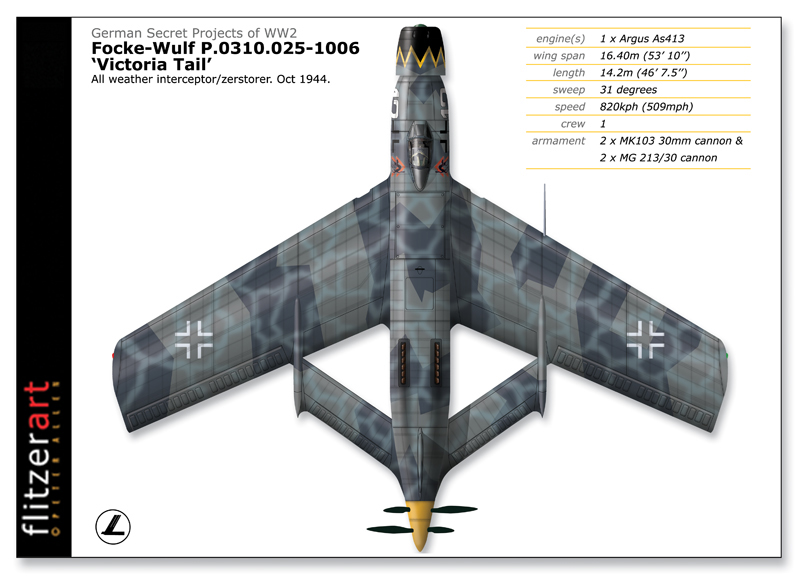 Thank!Where do you find this report?

sgeorges4 said:
Thank!Where do you find this report?
Click to expand...

I've found three versions in three different places but I think there are at least five versions out there. Manfred Greihl shows a drawing of it in his Focke-Wulf typenkompass that I've never seen anywhere else. Your best bet is the Musee de l'air et de l'espace.
S

the bourget in paris?
B

thanks again for this contribution. Any chance you post some scans of the content of this document?

And a third different version of the title page.