sienar said:
What is meant by "doppel-seitenleitwerk"? Twin boom like the flitzer or was this taking cues from the 162?
Click to expand...

I think the double vertical tail
B

It does appear to have exactly the same wingspan as the P 198 - 15m. Wing area is larger on the Focke-Wulf though, at 51m2 compared to 33.54m2 on the P 198. The Focke-Wulf is also significantly heaver at 8700kg with fuel, compared to 7257.48kg for the P 198.
The height of 4.4m, I'm guessing, means the 018 was either mounted above or below the fuselage, rather than in it.
In terms of general layout, the Focke-Wulf 018 fighter vaguely reminds me of this (see attached), which is the bomber part of the 'Daimler-Benz Projects'.

Justo,what do you have about this one? Is it historical or not? 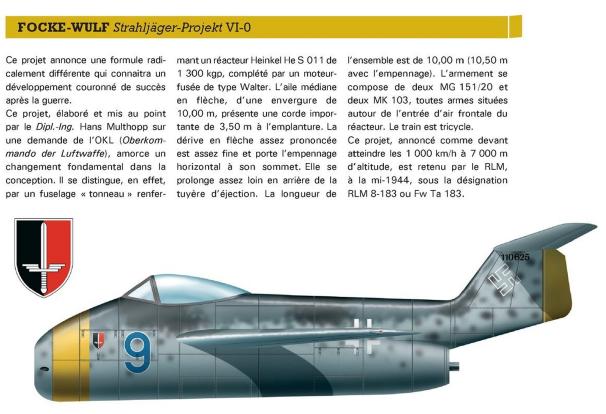 I didn't have your book yet,I'll try to have it for my anniversary
It's from the aero journal hors série 3 page 49.

sgeorges4 said:
Justo,what do you have about this one? Is it historical or not?
Click to expand...

Interestingly, it would appear that everyone who's ever published the original Focke-Wulf Volksflugzeug leaflet before, starting with Pawlas, has actually chopped the right hand section of it off. I was surprised, on finding the attached, to see a little Peterle featured on the right hand side! Also, contrary to everything that's ever been published before (I think) it would appear that during the first meeting to discuss the Volksjager designs there were only three designs on the table - Blohm & Voss's P 211, Heinkel's P 1073 and Arado's E 580. While the other companies, particularly Focke-Wulf (which came up with a short list of about a dozen different design options before settling on the four included in the leaflet), were scrambling to come up with something, the competition moved on at such a pace that their designs, when they were eventually presented, were simply rejected immediately. The front runner from the beginning was the P 211 but for the reasons related elsewhere, and much to Richard Vogt's disgust, the P 1073 won.

Just to stray slightly from the topic at hand in following up my previous post. Have a look at the attached. It gives an account of the first Volksjager design comparison meeting on September 14, 1944 - just four days after the spec was issued. The three major fighter competitions at that point were to be discussed - 1 TL-Volksjager (often confusingly referred to elsewhere as 1 TL-Jager at this time), Hochleistungs-Otto-Jager (high-performance piston engine fighter) and 1 TL-Jager (Me 262 replacement). During the Volksjager part of the discussion - only BV, Heinkel and Arado had anything to discuss...

Oh, and here's the message Focke-Wulf received at 12.30pm on September 10 which resulted in the Volksflugzeug 10 days later - the original Volksjager requirement. There's more to it than this snippet but I'm not going to publish the full thing just yet.

You'll do an article about it?

sgeorges4 said:
You'll do an article about it?
Click to expand...

It'll no doubt end up in another Luftwaffe: Secret volume.
W

Dan, which designs were tendered on the "High Performance gasoline piston engined fighter?

Good question. These ones (see attached).

Yes. The Focke-Wulf report has no images with it, though, and doesn't give project numbers or any other individual designations. They are simply referred to as the Blohm & Voss project, the Dornier project and the Focke-Wulf project. I'm reasonably sure I know what the BV and FW projects are, but the Dornier specs don't appear to match any known project.
S

What they look like(the BV and FW)?

sgeorges4 said:
What they look like(the BV and FW)?
Click to expand...

is there any whole drawing for it ?.

is there any whole drawing for it ?.
Click to expand...

There is. And a few other previously unknown Focke-Wulf night fighters. I'll be publishing them at some point. Here is another one.

Another, better known, one.

...still so much unknown... Great findings. Thanks for sharing!

newsdeskdan said:
There is. And a few other previously unknown Focke-Wulf night fighters. I'll be publishing them at some point. Here is another one.
Click to expand...

All three drawings presented in part above are from the 0310 251-XX drawing number sequence. The first one, -04, has its engines in nacelles built into its wings driving pusher props. The second, -08, has a twin boom layout with a contra-rotating prop to the rear between the booms. The third design, -25, is a twin jet type that has been referred to as the 'Fw 251', 'Fw 251-II' or 'P251' elsewhere. It is interesting to see that '251' really is just part of a drawing number sequence and that there never really was an 'Fw 251' or a 'P251'. Sorry to only tease the drawings but I will show them in full soon enough. One of the designs I haven't even teased is actually tailless!

newsdeskdan said:
The second, -08, has a twin boom layout with a contra-rotating prop to the rear between the booms.
Click to expand...

Roughly similar to the flitzer in wing and tail arrangement?

athpilot said:
...still so much unknown... Great findings. Thanks for sharing!
Click to expand...

Seconded and agreed. Thank you for showing those.

newsdeskdan said:
The second, -08, has a twin boom layout with a contra-rotating prop to the rear between the booms.
Click to expand...

Roughly similar to the flitzer in wing and tail arrangement?
Click to expand...

Roughly similar in that it's a twin boom arrangement but the wing trailing edges have a greater degree of sweepback (Flitzer of 0310 226-61 has a dead straight trailing edge, Flitzer of 0310 226-94 has a slight sweepback and the Volksjaeger Flitzer has a more pronounced sweepback), the booms are obviously much larger, the surface between the booms is low down rather than high up, there's a small remote-controlled turret in the rear end of each boom (gun type unclear - MK103?) and the front part of each boom protrudes below the wing and has two forward-firing MK108s in it. The shape of the fins/rudders is also different.
B

Highly interesting, Newsdeskdan. It seems the Lavochkin bureau was influenced by these late Focke Wulf designs, especially the La-200.

Amazing find my dear Dan,but maybe FW or something else,let me search.

Possibly drawing from the same DVL research that lead to the 262 having a triangular fuselage.

Sorry, I wasn't very clear. It's definitely a Focke-Wulf high altitude destroyer (it comes from a Focke-Wulf document). What I mean is, I think it's previously unknown in that no one else has ever published a picture of it before.

I was recently puzzling over the matter of Focke-Wulf projects which some - specifically Heinz J Nowarra and Luft46.com - have referred to by 'J.P.' numbers. For example, in his Die Deutsche Luftruestung 1933-1945, Nowarra refers to Focke-Wulf's Nachtjaeger mit HeS 011 Entwurf III' as 'J. P. 011-47' and one of the Hochleistungsjaegers as 'J.P. 000-222-018'. This struck me as strange because the description documents relating to those types certainly don't use those numbers when naming them. However, glancing through the graphs appended to a Hochleistungsjaeger description, it suddenly occurred to me that those 'J.P.' numbers are actually performance chart numbers, rather than project or drawing numbers. See appended examples.

NB. I should add, for clarity, that all these graphs have different 'J.P.' numbers, but all relate to a single project design.

This breakthrough and other findings from you should lead to a major redesigning of the Focke-Wulf project list, Dan.
S