Afriad to ask how fast is this SSBJ on approach and how long the landing roll.

Looks like a Geoff Wilde (RR Derby) concept from late '70s, with a relatively high-BPR turbofan, and the fan stream running through two small turbojets. With the two TJs running supercharged, you have a supercruise system, but you can then turn them off for loiter.

Incidentally, an earlier version of the MMIPS was briefly considered for use with Rockwell's late 70's minimum penetration time concept (part of it's Advanced Bomber studies [Linked post has in turn a DTIC link to Technical Report ASD.TR-78-23]). However:

(U) It was originally intended to use an advanced turbojet as the baseline
engine for this concept, with a variable-cycle engine to be used as a trade
study. However, the initial sizing exercise quickly revealed the impracticality
of this approach (Figure 100). The turbojet aircraft weighs almost 9 million
pounds, which is totally unacceptable. Therefore, a variable/multiple-cycle
engine comparable to the engine discussed in the paragraphs on low-cost trades
was employed on the baseline.

(U) Also, the Rockwell multimode integrated propulsion system (MMIPS) was
examined for this aircraft. A MMIPS could provide SFC improvements of
approximately 3 percent at subsonic cruise and at penetration relative to the
VCE baseline. This would be achieved by using a fean engine with a higher bypass
ratio, approximately 2.5, sized for subsonic cruise, and sizing the turbojet
for takeoff and penetration,. The MIPS weight would be approximately the same
as the VCE baseline because the significantly higher takeoff specific thrust
of the MIPS would allow smaller engines. While SFC is extremely important in
the minimum time penetration aircraft, the modest improvement the MIPS offers
tends to be offset by the complexity of the installation. Thus, the MIPS was
not analyzed further.
Click to expand...

[Images also from the Rockwell Advanced Bomber Studies thread, in this case courtesy of Pyrrhic victory]​

I'm certainly a fan of mixing propulsion systems for a synergistic effect. Has anything of this sort been considered more recently? Maybe even using bypass air from a turbofan to provide compression for (a) ramjet(s)?

Aww, come on! Rockwell could have laid claim to the world's largest aircraft if they had pursued that! Well, unless Lockheed had decided to build the CL-1201-1 as well, that is. ;D

can anyone drop me this file? (wishing nice intractable diarrhea to you, senator Wolf!)

Still looking for that paper. I can't believe that forum members have 500+ times clicked on MMIPS SSBJ image and no one has downloaded actual paper(((

flateric said:
Still looking for that paper. I can't believe that forum members have 500+ times clicked on MMIPS SSBJ image and no one has downloaded actual paper(((
Click to expand...

I get a "page not found" message when I clink the link to try and download it.

that's why I kinda asking who has downloaded it before one Chinese bought one-way ticket to Beijing...

I never downloaded it. I have about 250 NASA reports saved on my computer, mostly military aircraft related ones though.

flateric said:
that's why I kinda asking who has downloaded it before one Chinese bought one-way ticket to Beijing...
Click to expand...

;D , I check again from my files,sadly I didn't keep that report,from about 6 months,I deleted
approximately 350 units of this stuff,now I am shame from myself.


and thanks to the God for give that gift again,now I will keep it like my eyes.


if someone can makes an artist drawing to those projects,by colors,that will be very nice.
P

Are there some top/side/front sketches or drawings?


unfortunately we don't have more than those two drawings.

It is very nice design but these drawings are only for repainting in color. I have tried to do some 3D models from similar drawings of CL-400 Suntan but it was more speculation as reality


if you will try to drawing them,I don't want to be exactly their appeals,but we can
say,a looks like them,thank you in advanced. 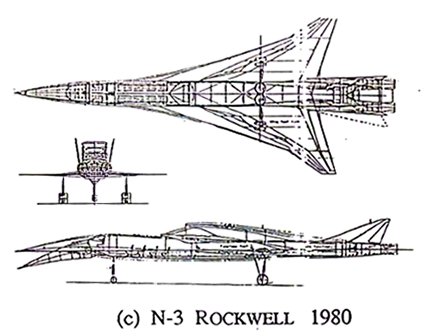 This thread is the proverbial one that makes me love this forum - humour, sleek jet projects, advanced tech.

I saw a drawing to it in colours on Net from many years,