Many years ago I read about SWATH being the ideal hull form for future naval ships because of their superior seakeeping ability to monohulls. There stability made them ideal for carriers according to an article I read in Proceedings of the American Naval Institute.

We breifly saw concept art for the future Royal Navy Carrier in SWATH, catamaran, and tri-maran configurations and now the HMS Queen Elizabeth and the HMS Prince of Wales are monohull carriers. The only Naval non-monohulls I can think of are the Lockheed Seashadow , the R/V Triton, and the Independence-class LCS. What happened? Do they not look like proper ships and so the Navies don't like them?

A simple phrase: "Horses for courses". Advanced Marine Vehicles (i.e. anything other than displacement or semi-displacement monohulls) are, as a general rule, less suitable for "general application" than the monohull. For example:

SWATH: Has superior seakeeping, with higher speeds in a seaway and lower motions, but has a higher structural weight, greater draught and is more resistful at lower speeds. SWATH hullforms are, nonetheless, used by Germany (research vessel), the UK (personnel transfer) and the US (Sonar tug).

Catamaran: Greater deck area and lower draught than an equivalent displacement monohull, but "unusual" motions in a seaway. Used by the Australians for mine countermeasures vessels.

SES / Hovercraft: Very high speeds and resistance to underwater explosion but complex and expensive. Used by UK, US, Russia, Greece, Norway etc etc for landing craft and mine countermeasures.

Trimaran: (Depending on configuration and operating envelope) Reduced resistance, improved sea-keeping, increased upperdeck space and stability. Research on large trimarans only got underway in a serious way in the West in the 1990s. The general draw-down of military forces post Cold War means that the fact that a demonstrator and one experimental warship have been built is actually quite impressive.

Navies and Defence Ministries can be of two minds on this:

1. Look at the amazing new technology!
2. The risk! The risk! Won't someone please think of the risk!

Somehow out of these two comes a conservative, but quite pragmatic approach to the development of ship designs.

The trimaran CVF design is, IIRC, actually a product of the AVPRO consultancy, not the MoD. It showcased some of their ideas, such as a screw-jack based lift and highly angled flight deck.

THere was also the USN's Pigeon class submarine rescue ships and Hayes class Oceanographic research ship (catamarans), the Victorious and Impecable class ocean surveillance ships (SWATH), and several high-speed catamaran transports. The Norwegians have their Oksøy/Alta class minesweepers (SES) and there are some others various places. The Chinese wave-piercing catamaran FACs are probably the most interesting recent entrants in the category.

FWIW, SWATH in particular turns out to be really bad for carriers from anything other than a ship motion perspective. They tend to be fairly large (and deep) for their payload and are very weight sensitive. Small changes in payload have surprisingly large impact on draft, because any change in displacement has to be taken up only in foil immersion. They're also quite sensitive about damage and things like asymmetric flooding are really hard to manage. Plus, the configuration makes it hard to locate critical components (like weapon magazines) below the waterline.

Catamaran: Greater deck area and lower draught than an equivalent displacement monohull, but "unusual" motions in a seaway. Used by the Australians for mine countermeasures vessels.
Click to expand... 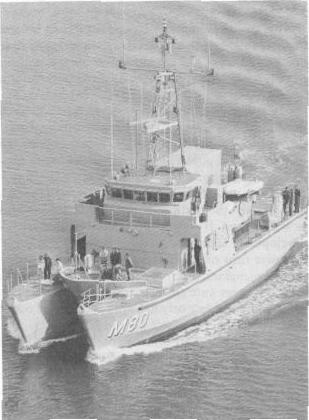 There have also been a few ferry cat conversions/developments used by the RAN (HMAS Jervis Bay) and the USA (High Speed Vessel 2 “Swift” etc): I had a look back and it says 3500tons and 33knts. From La Nave Virtuale in Storia Marina by E Cernushi

Some relevant text below, I couldn't get a great translation but pretty much there was no money for aircraft carriers or heavy cruisers so six light cruisers were built instead. There's a sidenote about an interesting diesel-petrol drive system to be used, though I'm not convinced of how well 96 engines coupled together would work.


Some of the ocean-based research being performed by
the U.S. Naval Research Laboratory personnel has resulted
in the need for a research platform that introduces a minimum
amount of disturbance into the ocean surface while
measuring and sampling sea-water. With minor modifications,
a 25-ft sailing catamaran has been made into a suitable
manned research platform. Sampling runs made in the wake
of a 50-ft submarine are described in detail.

This is an interim report; work on this problem is
continuing.

To follow-up on the Yarrow SWATH mentioned in the Type 24/25 thread, three twin-hulled vessels were exhibited in model form at RNEE 1989.


• VT presented a 49m, 40 knot craft with a flight deck for Lynx, said to be derived from an Incat design - I think this is the design shown in Rebuilding the Royal Navy.


• FBM Marine had a model of their Fast Displacement Catamaran, shown below, intended for an "interceptor" role - presumably a fast OPV. The article notes that a ferry version was in use around the Portuguese Atlantic islands.


• Yarrow showed their 2400t sonar support vessel, a true SWATH. This is shown below. Each hull had two stabiliser fins on the inboard side, and diesel-electric propulsion gave 14.2knots.

My guess is that this concept is from Canada with the red Maple leaf on the funnel. Anyone recognize it? The next frigate class after the Halifax-class frigate?

Drawn by someone with limited understanding of naval architecture. For example, that's a 5-inch gun forward. It needs a full deck below the mount for the ready-use magazine and more below that for the hoists and the main magazine. There just isn't enough height in the hull as drawn.

Other than a Sept 2001 PopSci article, I can't seem to find much else about the Leviathan trimaran batleeship concept.
http://books.google.com/books?id=iQyaw_xlM_UC&pg=PA42&lpg=PA42&dq=us+navy+leviathan+battleship++Popular+Science&source=bl&ots=iTKQ6_xd77&sig=2pbSX1iWRSz4mGkx5BBHZ_sZjvY&hl=en&sa=X&ei=bBA0VMPEIMuhyASzn4GgBw&ved=0CC4Q6AEwAg#v=onepage&q=us%20navy%20leviathan%20battleship%20%20Popular%20Science&f=false

"One of the main ships considered by the US Navy, is known as the Leviathan. The ship would have electric motors that could propel all of its 25,745 tons to 32 knots. The ship is armed with twin rail guns, that can accelerate a shell (1 out of a magazine of 12,240) up to mach 10. Despite their smaller calibre size, each shell has the impact velocity of a 16-inch gun from an Iowa Class battleship. The energy necessary to fire only requires a decrease of speed to 30 knots. The Leviathan is also armed with missile systems, as well as unmanned aerial reconaissance/attack underwater vessels and aircraft for self-defense. All this manned by only 88 sailors and officers, with room for up to 142 special operations soldiers. The ship is powered by six gas turbines, each distributed throughout the vessel with flexible power routing, allowing the ship to remain powered after sustaining combat damage. The ship has a satellite linked network, allowing it to direct and control the operations of its entire battle group. It's hull also has an inner liner, providing underwater explosion protection against torpedoes and mines. Another innovative concept introduced in the Leviathan is side thrusters, known as azipods, on the outriggers. With the outboard thrusted pods aimed in opposite directions, the ship could rotate in place. Such manueverability is unavailable in current ships, and is especially useful in anti-submarine warfare. It would also allow the ship to dock in less developed ports, and without the aid of local tugs"

The two smaller designs in that article were done as Spring Style concepts by NAVSEA sometime in the 1990s. I don't think any of the designs were seriously considered; they were just explorations of the state of the possible with multi-hull designs.

TomS said:
Drawn by someone with limited understanding of naval architecture. For example, that's a 5-inch gun forward. It needs a full deck below the mount for the ready-use magazine and more below that for the hoists and the main magazine. There just isn't enough height in the hull as drawn.
Click to expand...