The SST program has always fascinated me especially with the beauty of the designs and the fact that the Concorde which was already massive was dwarfed in terms of size to the designs that the US had proposed. One thing that always piqued my curiosity though...would it have been possible for the SST to actually take to the skies if the L-2000 was chosen instead of the 2707? Lockheed had a fair amount of experience with supersonic aircraft especially since they had the F-104 and the A-12 and SR-71 under their belt. 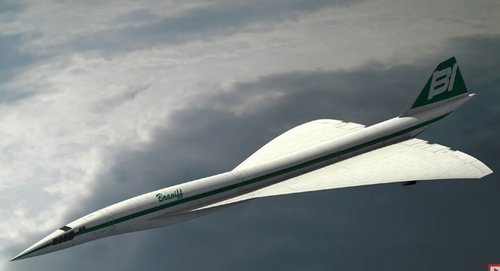 We have a good topic already on SSTs, but the gist of it was the L-2000 was probably buildable, but (like Concorde) could not be competitive with subsonic airliners. The premise of the 2707 was that using recent NASA research, you could have an SST that was able to somewhat compete with conventional airliners in terms of operating costs. It turned out that the fabled 2707 with VG wings was unbuildable with the technology of the time; the eventual fixed wing 2707 was no more competitive than L-2000 or Concorde.

overscan (PaulMM) said:
We have a good topic already on SSTs, but the gist of it was the L-2000 was probably buildable, but (like Concorde) could not be competitive with subsonic airliners. The premise of the 2707 was that using recent NASA research, you could have an SST that was able to somewhat compete with conventional airliners in terms of operating costs. It turned out that the fabled 2707 with VG wings was unbuildable with the technology of the time; the eventual fixed wing 2707 was no more competitive than L-2000 or Concorde.
Click to expand...

Thanks a lot for clearing this up. I always thought that the 2707 was canceled mainly due to environmental concerns, costs and delays. I did not know that the 2707-300 wouldn't have been anymore competitive than its counterpart from Lockheed or the Concorde. I'll be sure to look into the thread for further information

All of those were factors, but the overriding factor was you could build an SST from a technical perspective, but it could never get the same efficiency, so it was hard to see how you recouped the additional running costs. Some creative accounting assuming SSTs would make more flights per day (due to being faster) and therefore make similar money to a subsonic airliner despite higher costs was probably never going to be correct - it would have needed roughly similar pricing, no stress-based impacts on airframe life from supersonic flight, and no additional maintenance costs, none of which seems especially likely.

Part of the issue is that if you have a mixed fleet, and price SST seats as business class, say, all your business class passengers probably move over to SST flights, which makes your subsonic airliners less profitable. They rely on the first class/business class seats to make money.

The SST development never made much economic sense. Even today, it would be challenging. To me, the only obvious market is the business jet SST for billionaires - then cost becomes irrelevant.
V

Some creative accounting assuming SSTs would make more flights per day (due to being faster) and therefore make similar money to a subsonic airliner despite higher costs was probably never going to be correct - it would have needed roughly similar pricing, no stress-based impacts on airframe life from supersonic flight, and no additional maintenance costs, none of which seems especially likely.
Click to expand...

I think that's rather an extreme position. An aircraft which is twice as productive can have half the life and still break even, because the airline is selling seat miles, not flying hours.

It can also burn more fuel, provided that this is offset by a corresponding cost reduction elsewhere (e.g. reduced crew costs due to higher productivity), or increased revenue (higher ticket prices).

You can't expect double the productivity from double the cruise MN, because of airspace, but there are big benefits to be had:

I found BA's timetable from 1978-9. I have calculated scheduled ground speeds based upon the great circle distance of 2,999 nmi.
If we look at LHR-JFK:


JFK-LHR is on the opposite page:


I have calculated the implied wind as being half the speed difference between the directions. It isn't obvious why Concorde's schedule appears to be based on double the assumed wind of the subsonic jets

In any case, Concorde is about 78% faster that the 747 flying West to East, and about 60% faster flying East to West.

Of course, in 1978, the expectation was that pax would check in an hour before departure (45 minutes at LHR for 1st class & Concorde), because the security theatre was less elaborate. Check-in delay reduces the door-to-door advantage somewhat, but 3 hours is still 3 hours, and this is an advantage for which people were, and are, prepared to pay a premium, especially for business travel (I suppose that some Americans might also be prepared to pay a premium for pleasure travel as well, given their limited holiday allowances).

The big productivity question is whether you can get an extra sector per day out of the crew. I don't know what Concorde's turnaround time was, so it's hard to comment with authority, but it looks pretty marginal. If we imagine BA173 turning around and becoming BA172 on the return journey, they would push back at 0915 and park up at 2100, which is already almost a 12 hour day, before we consider whatever briefing & pre-flight would be needed before the first flight of the day.

My suspicion, however, is that a higher cruise MN would have been needed to make this work comfortably, which is perhaps why Concorde's original target was 2.2, and the Americans wanted 2.7.

The big problem with aircraft productivity is that you can only make an integer number of flights per duty period, and the real benefits only arise when you can get an extra sector in. I suppose this may have motivated the codeshare with Braniff to fly between New York & Washington DC.

I should note that the original plan for the Boeing 747 was that it would serve a relatively short time in the airliner role, being then progressively relegated to cargo planes & other secondary roles as SSTs became available.
R

I'm so glad you calculated the flight times. Saving 2-3 hours is barely workable, given a dropoff to takeoff time of an hour or so. Also, it depends on the ticket premium, is the corporate travel department going to decide it's worth it? Nowadays, you're adding an hour or so of airport time at either end. Yes, you can probably get a flight or two extra per day in if you work the plane like a dog, however: there is a sweet spot where you want to land at your final point (business meeting at 9-10 AM, or hotel 4-6 PM). Also, do want to pay the big bucks to take a redeye? This sounds odd, but I think running the Concorde as a cargo aircraft where you can dump the seats, the cabin crew, etc. The Concorde was a fairly marginal aircraft. I vaguely recall it was designed for the New York-London trip, and needed reduced seats to make it on other runs. This would give the airlines and manufacturers and airlines time to figure out the SST in the real world,
A

I did some (very rough and approximate) calculations here.

By stretching boundaries a little, fact is a Mach 2.7 SST could make three Europe / New York rotations per day, when Mach 2.2 Concorde would make only two and 747 only one - and piston engine, 0.5.

With perfect hindsight the US choice of 250 passengers at Mach 2.7 was the correct one on economic grounds. They had done the maths pretty correctly.
On the Europe - N.Y - Europe airway, the most lucrative in the world even today...
Concorde carried 130 passengers two times per day - 260 passengers total.
SST would have carried 250 thrice in a day - 750 per day, thrice as much !

Maybe that's how they hoped to be competitive on transatlantic flights.
Transpacific by contrast with a 3500 miles range would have been rather hopeless...
Tokyo - Anchorage - Los Angeles
Tokyo - Hawaii - Los Angeles

What doomed the SST was
- time lost with Boeing stupid VG wing design
- range: the GE4 was grossly inefficient
- titanium construction - mandatory for Mach 2.7, but a giant PITA as recognized by Clarence Johnson about the A-12 family
- noise, obviously
- the oil shock and advent of ecology, too
Last edited: Aug 11, 2020

The US SST belonged to an era when "faster" was seen as the natural next step. The impact of the 707 on air travel was expected to be repeated by the SST. Concorde like the Comet would be trumped by a larger, faster US design. As has been mentioned, 747s were designed so they could become cargo haulers like the DC7s had when jets replaced them.
Swing wings for the Boeing design (I love the madness of this and have numerous models and toys of it) was supposed to be easier to land and take off than a pure delta and be more economical. The original 733 version looked like a B1 bomber and was much closer to a Concorde in size. The eventual delta 300 version still tried, with its tailplane, to offer easier operation than a pure delta.
The supersonic boom problem, the disenchantment in the Nixon years with budget drainers as Vietnam dragged on, the mounting technical problems, killed the US SST in 1971. The fuel hike in 1973 would have if it had survived.
Like a lot of 60s dreams/madness the SST died in those grim years of the early 70s. Concorde would have joined it if France had not been so determined.
Share:
Facebook Twitter Reddit Pinterest Tumblr WhatsApp Email Share Link