Can someone provide me with some facts on the Leo 1A6 program. I know that it entailed fitting a 120mm gun and somekind of armour upgrade but what else?
S

Try these links from a Google Image search
http://images.google.co.uk/images?as_q=&hl=en&output=images&svnum=10&btnG=Google+Search&as_epq=Leopard+1A6&as_oq=&as_eq=&imgsz=&as_filetype=&imgc=&as_sitesearch=&safe=off
A

My pleasure. I'm out of touch on landbased stuff, and didn't know the 1A6

Here are some prototypes and concepts for Leopard 1 medium tanks.

To start the Leopard 1A6 prototypes with 120mm Rheinmetall gun. The prototypes included the new gun, the EMES 18 fire control system (Leopard 1A5), appliqué turret front and side armour, appliqué turret roof armour, PERI commander’s sight and IR suppression for the exhaust system.

Self Propelled gun with either 135mm or 155mm howitzer


Very nice. Thanks.
B

In „Typenkompass Artillerie-, Panzer- und Luftabwehrsysteme der Bundeswehr“, by K.Anweiler and
Manfred Pahlkötter, I found a photo of the Matador SPAAG. The turret front seems to have a different
shape compared to the drawing in GTX post.

Jemiba said:
In „Typenkompass Artillerie-, Panzer- und Luftabwehrsysteme der Bundeswehr“, by K.Anweiler and
Manfred Pahlkötter, I found a photo of the Matador SPAAG. The turret front seems to have a different
shape compared to the drawing in GTX post.
Click to expand...

That is an amazing find and post Jemiba. Thank you.

Jemiba said:
The turret front seems to have a different
shape compared to the drawing in GTX post.
Click to expand...


It looks the same to me just a different photo angle. One big difference is the big circular hatch for the shell ejection/reload thingy is closed in this case when most of the time they are opened in the other photos.

Code:
This video is also available in the German language.

Cool. It almost has a Tiger II look with the turret mods. 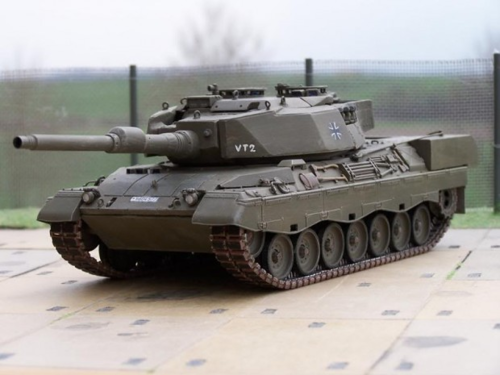 Wyvern said:
Is this it?

We have more pics in the Leopard 1 variants thread, here:

Never noticed these AA missile proposal before; has anyone got any more detail about them, particularly the Rapier one.

Let me check my resources and get back to you.

The SAM variants shown were covered in "Gepard: The history of German anti-aircraft tanks" by Walter J Spielberger. Frustratingly, I cannot find my copy at the moment.

Christmas is coming!!! I'll have to make sure my sister gives me an Amazon voucher.
J

Then again; shouldn't have spoke so soon. Has a look on Amazon it's running at £70+ a copy.

6.1 Air Defense Missile Systems based upon the Leopard Main Battle Tank (Studies)
In 1978, under contract by the Dutch Company, Hollandse Signaalapparaten BV., Krauss-Maffei completed a feasibility design study. The objective of the study was to investigate mounting a surface-to-air Missile Tank Turret on a modified Leopard MBT chassis. Three different types of missiles were considered:
6.1.1. "Roland" Surface-to-Air Missile Turret
By considerable retention of most of the standard CA 1 turret, a fully autonomous, air defense missile system was created. In all it was planned that the complete system would carry ten, ready-to-fire "Roland" Anti-Aircraft Missiles. Besides which, for self-defense purposes two 7.62 mm FN Machine Guns and two "Swingfire" Anti-Tank Missiles were proposed. The three man crew concept of the CA 1 was retained. In the roof of the turret the standard Gunner's periscope was replaced by an optronic missile Tracking Unit.
6.1.2. "Rapier" Surface-to-Air Missile Turret
Also with this concept the CA 1 turret remained practically unchanged, two laterally mounted missile launchers replacing the 35 mm cannon. Each launcher containing five of these British developed surface-to-air missiles ready to fire. The means of self-defense which were provided being identical which were proposed for the "Roland" concept. Again the standard Gunner's periscope was replaced by an Optronic Tracking Unit.
6.1.3. "Chaparral" Surface-to-Air Missile Turret
The "Chaparral" lightweight, supersonic, surface-to-air missile requires no guidance after launching, an infrared target seeker head serves this purpose. "Chaparral" is a derivative of the "Sidewinder" AIM-9D air-to-air missile. Eight "Chaparral" missiles (4 on each side) could be stowed in armored launchers on the almost standard CA 1 turret (Guns removed as in both other concepts). Once again, for self-defense purposes two "Swingfire" Anti-Tank Missiles were included in the concept. As target tracking was unnecessary due to the missile infrared seeker, the Gunner periscope remained standard, only an additional "black-box" adaptor was necessary for providing guidance for the "Swingfire" missiles.
Click to expand...

found what you were looking for in the Gepard book
Last edited: Dec 1, 2020

Interesting, I never knew that the Germans had considered using Swingfire. 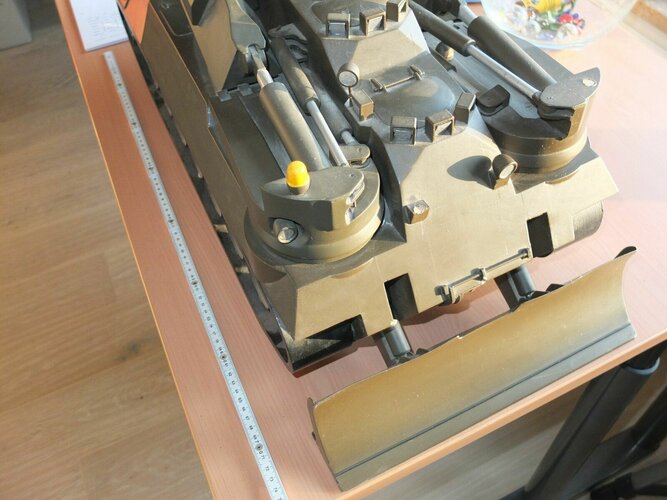 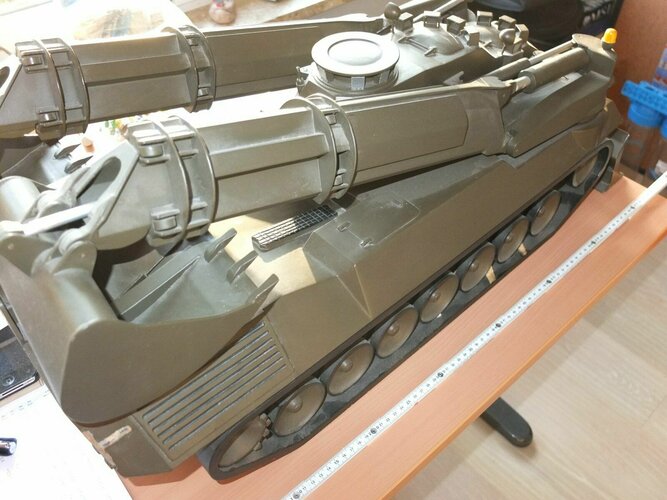 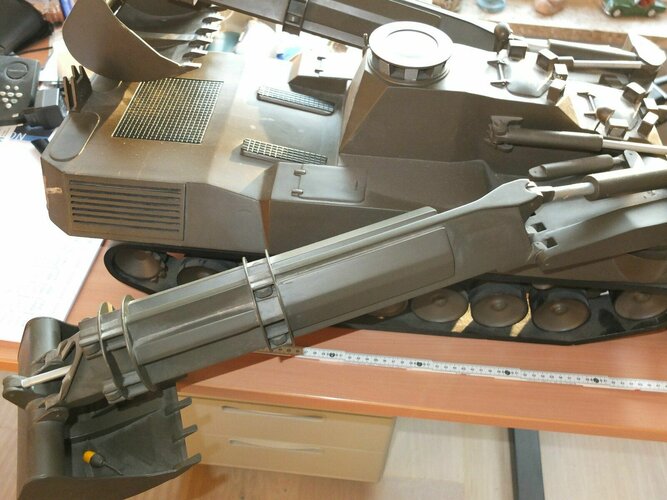 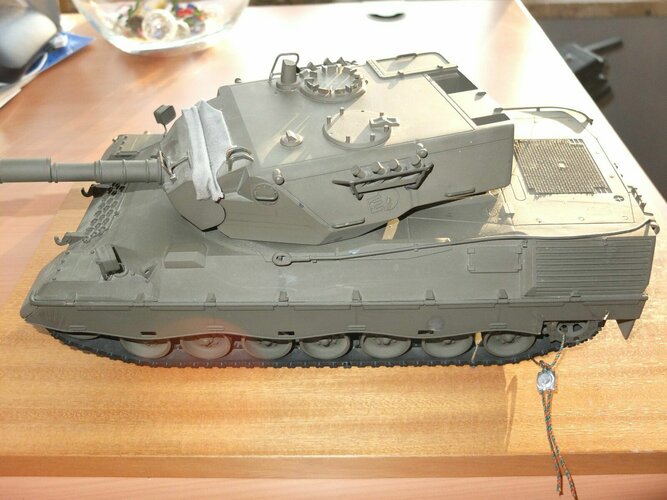 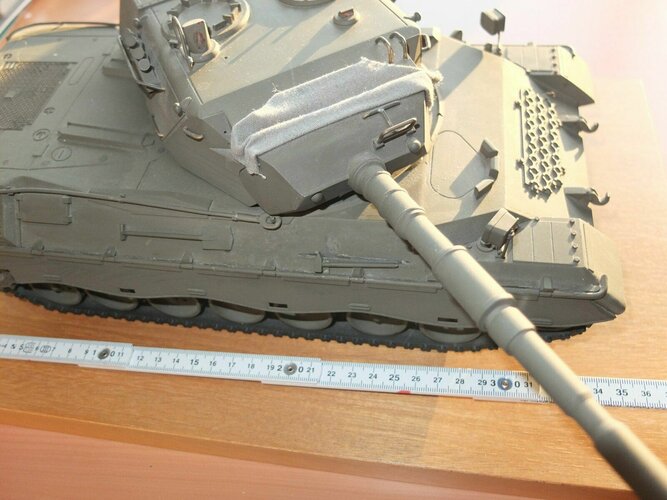 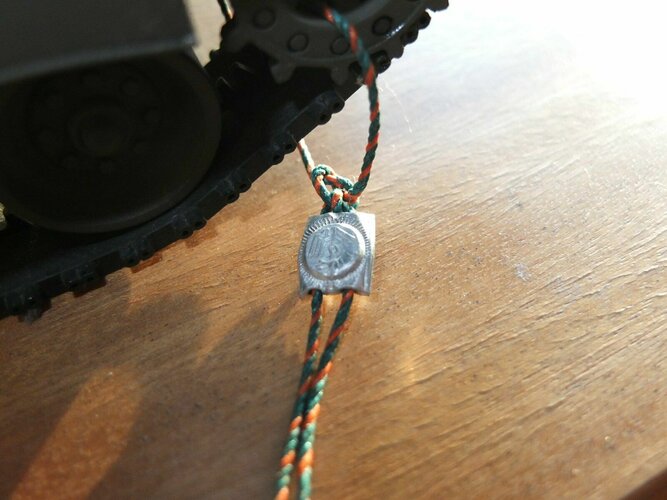 Both models will be with me until February! Greetings from Frielendorf - Germany - Johannes
R

Both models will be with me until February! Greetings from Frielendorf - Germany - Johannes
Click to expand...

Looks the same as the Leopard AS1... 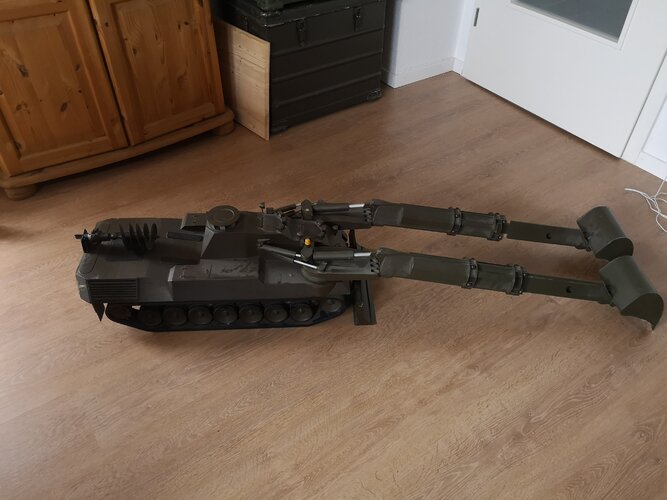 That thing looks like something out of every four year old boys' dreams! Two diggers will definitely get the job done

The vehicle or the design is really beautiful, all parts are movable .. I would like to dig with the model in the sandpit of my 3 year old daughter

Hello dear tank friends! Today I got a new prototype model again, the Leopard 1A4 in 1:15 scale! I hope you like him!

Just a small question that has intrigued me for years, what is the purpose of the white crosses on the rear of German AFV, I assume it was something to assist driving at night, am I right or wrong?

These are camouflage guide crosses practically a night light