I would think it could be modified enough for carrier use but it would take a good pilot to land it.

AFAIK there were no proposals for carrier use.

The J7W2 Shinden-Kai the jet engined would be easier to land due to the lack of large propellers aft?

Tzoli said:
The J7W2 Shinden-Kai the jet engined would be easier to land due to the lack of large propellers aft?
Click to expand...

The answer can only be highly speculative given the limited flight testing done on the full-size J7W1.
It would have cured the torque problems but the slower throttle responses of the early turbojets would have posed other problems from carrier-based use.

As far as I know the Shinden was only proposed for land-based use, the IJN had other piston-engined fighters in development for carrier use anyway.
R

Hood said:
As far as I know the Shinden was only proposed for land-based use, the IJN had other piston-engined fighters in development for carrier use anyway.
Click to expand...

Other then the A7M Reppu?

Tzoli said:
Other then the A7M Reppu?
Click to expand...

There was also the proposed carrier version of the Kawanishi N1K2-J (but now -A?) Shiden-KAI.
Also the proposed Kawanishi J6K Jinpu. Designed as a land based interceptor, it was proposed as a naval fighter called the A8K.

Of course neither of these even made it to the mock-up phase, but at least the navalized version of the N1K2-J was doable as the base aircraft already existed. The biggest problem with either the A8K or a carrier adaptation of the J7W would be the lack of range. Both are originally designed as interceptors and range is not a high priority with that kind of aircraft.

EDIT: According to Wikipedia (but no source given), the carrier version of the Shiden-KAI was designated the N1K3-A Model 41 and 2 prototypes were built. Also there was the N1K4-A Model 42, which had an improved Nakajima Homare 23 engine of 2,000 hp with one prototype built.

I would take this info with the proverbial "grain of salt" unless someone else can verify that these prototypes were actually built.

According to the Japanese wiki the Shiden was tested on the Shinano.

According to the Japanese Wiki: (Google translate)
試製紫電改二（N1K3-A） Shiden-Kai:
A carrier-based fighter made by modifying the trial Shiden Kaiichi with a landing hook and reinforcement of the tail. Two prototypes. On November 12, 1944 (Showa 19), he participated in a landing experiment on the aircraft carrier Shinano, which was conducted in Tokyo Bay under the control of Major Hisashige Yamamoto
sources:
『世界の傑作機No.124 強風、紫電、紫電改』42頁 - "World Masterpiece No.124 Strong Wind, Shiden, Shiden Kai" p. 42
『最強戦闘機紫電改』136-137頁 - "The Strongest Fighter Shiden Kai" pp. 136-137

試製紫電改四（N1K4-A） Shiden-Kai:
A carrier-based fighter type with a landing hook added to the trial Shiden Kaisan. It is said that a prototype was manufactured.
source:
『世界の傑作機No.124 強風、紫電、紫電改』42頁 - "World Masterpiece No.124 Strong Wind, Shiden, Shiden Kai" p. 42

I don't want to drift too far away from the J7W, but wasn't the J2M also tried on the Shinano?

Airborne2001 said:
I don't want to drift too far away from the J7W, but wasn't the J2M also tried on the Shinano?
Click to expand...

I doubt it. The J2M Raiden was an interceptor. It didn't have the range a carrier fighter would need. It also emphasized speed and climb and had a short wing span - also not conducive to carrier operations.
N

I saw a post regarding Japanese news that they may have found the J7W1 wheels. Anyone know anything more?

Not at the moment, sorry.
N

This is what I was talking about btw 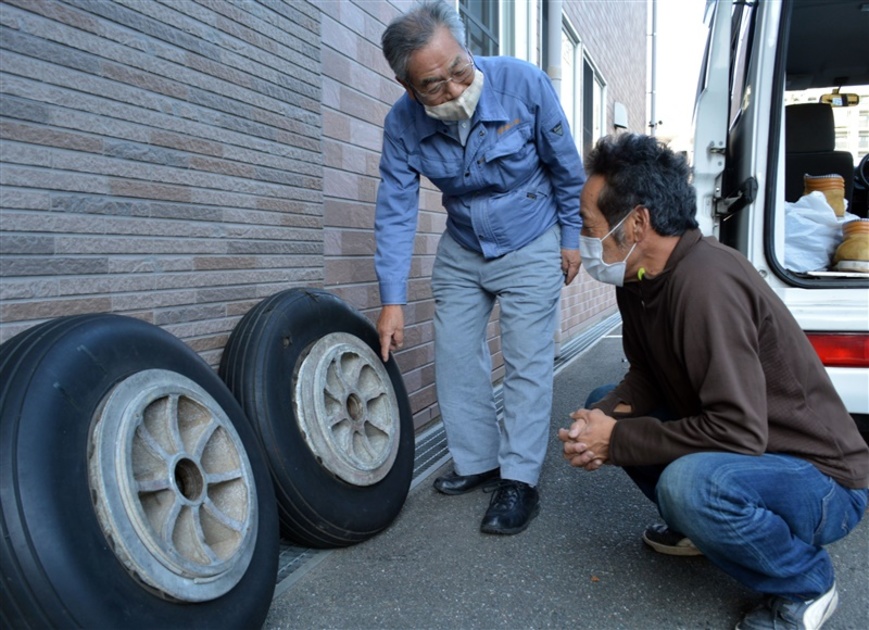 Kazuyuki Takahashi (age 66), a farmer in Tachibana town , Yame City, Fukuoka prefecture owns the two wheels that may have been attached to Shinden, and his hobby is collecting historical materials.
He got this wheel from a farmer in the city about 20 years ago.
The previous owner did not know the details and the wheels were left in the barn.
Mr. Takahashi speculated, "Isn't the military surplus used for the wheels of the cart immediately after the end of the war, when there was a shortage of supplies?"

Mr. Takahashi read a newspaper article about Shinden last year and thought, "If this wheel belongs to Shinden, it will be a historically valuable material.
He investigated the wheels, tire manufacturers, and specifications of various fighters, and found that the wheels matched the characteristics of Shinden.
The side of the tire says "Made by Nippon Tire Co., Ltd."
The wheel is engraved with the letters "九(Nine, Kyu)" Circled.
Nippon Tire is the company name of Bridgestone during the war.
He asked the Kurume factory, which was manufacturing military tires, about this tire, but the factory responded that "the record at that time was requisitioned by GHQ and there is no record left."

There is no historical material on the wheels of Shinden at the Tachiarai Peace Memorial Hall (Chikuzen Town).
Most of the information on former Japanese fighter aircraft was incinerated or requisitioned by GHQ.
However, some engineers secretly hid it, and in some cases information was found in the relics.
The photograph of Shinden remains a photograph of the entire aircraft, but the wheels are covered with a cover, and the shape of the wheels cannot be confirmed.

The prototype of Shinden is exhibited only at the front of the fuselage by the Smithsonian National Air and Space Museum.
He asked the museum for information on Shinden's wheels.
The answer from the museum was, "The size of the tire is 725 mm in diameter and 200 mm in width, and it can be used in place of Nakajima Aircraft's" Saiun ".
He told the museum, "I want you to send me an image of tires," but the museum said, "The coronavirus epidemic has prevented staff from entering the archives."

It seemed that all the measures had been exhausted, but Watanabe Iron Works, the successor company of Kyushu Airplane, contacted him saying, "A OB who is familiar with that time will looks at the tires."
Mr. Takahashi immediately brought the tire to Watanabe Iron Works in Fukuoka City and showed it to Mr. Masahiro Okada (age 85 years old), a technical advisor.
According to Mr. Okada, many tires were brought in in the past, but none of them were Shinden.
Shinden has no blueprints or parts.
At the age of 10, Okada looked up at Shinden, a test flight from the Mushiroda Airfield, and joined Watanabe Iron Works at the age of 20 after the end of the war.
Mr. Okada said, "The fact that the state-of-the-art Shinden was built here at that time is the pride of the engineers," while observing the wheels all over, "There are traces of the brake shoes hitting, so actually
Probably it was used. It seems that it is not a pair of wheels because the treatment of burrs and the degree of damage are different. "
After all, Mr. Takahashi could not confirm whether the wheels were from Shinden.
Mr. Takahashi hopes, "If this tire is a Shinden wheel, I would like it to be exhibited and used by many people to think about history."
Last edited: Feb 11, 2021

OK, bear with me on this because I know very little of the aircraft apart from it being a bit on the lairy (Hopeful) side of design for its time. Is this one of those design templates that should be revisited in the form of a fully flying replica? Does anyone have pilot notes from the time available? This is one of those types I have wondered about for some time and I would really like to know if they got the whole thing figured out before work stopped. Sorry to go off on a tangent.
N

Foo Fighter said:
OK, bear with me on this because I know very little of the aircraft apart from it being a bit on the lairy (Hopeful) side of design for its time. Is this one of those design templates that should be revisited in the form of a fully flying replica? Does anyone have pilot notes from the time available? This is one of those types I have wondered about for some time and I would really like to know if they got the whole thing figured out before work stopped. Sorry to go off on a tangent.
Click to expand...

Like any experimental airecraft that is unconventional, it had potential, but it also had issues that would have to be worked out. Scale flying models have exhibited a tendency to pull to one side due to the torque of the 6 blade propeller and that has to be accounted for. Our esteemed Mr. Blackkite indicated in an earlier post that the production units would have used a more conventional 4 blade propeller, but I suspect that issue would still need to be dealt with, possible engine cooling. Further upgrades would have used an advanced jet engine when it became available negating the torque problem altogether. I'm sure there would have been other issues to resolve if testing had continued. Knowing the time it takes to bring a new aircraft from prototype to production, the J7W would not have seen combat until well into 1946 if not 1947. My favorite aircraft, the Ki-84 first flew in March 1943 but did not see combat until late 1944 and it was not only a conventional design but an evolutionary one as well, based on Nakajima's previous Ki-43 and Ki-44.

Perhaps a contra prop would have been possible without adding too much rearward bias CG wise. I would like to have found some pilots notes on the test aircraft, how it flew etc but no idea if there are any extant. There were a huge number of very hopeful designs and finding out how pilots thought of them seems to me to be a great way of judging their validity etc. Thank you for the kind response, Sir.
Share:
Facebook Twitter Reddit Pinterest Tumblr WhatsApp Email Share Link