I couldn't find an existing one so here is a thread for and unknown, secret or rare Junkers Ju-87 variants. To start with here is a photo (albeit poor quality) of a Jumo 213E powered Ju-87. It was a trial installation on a Ju87B. 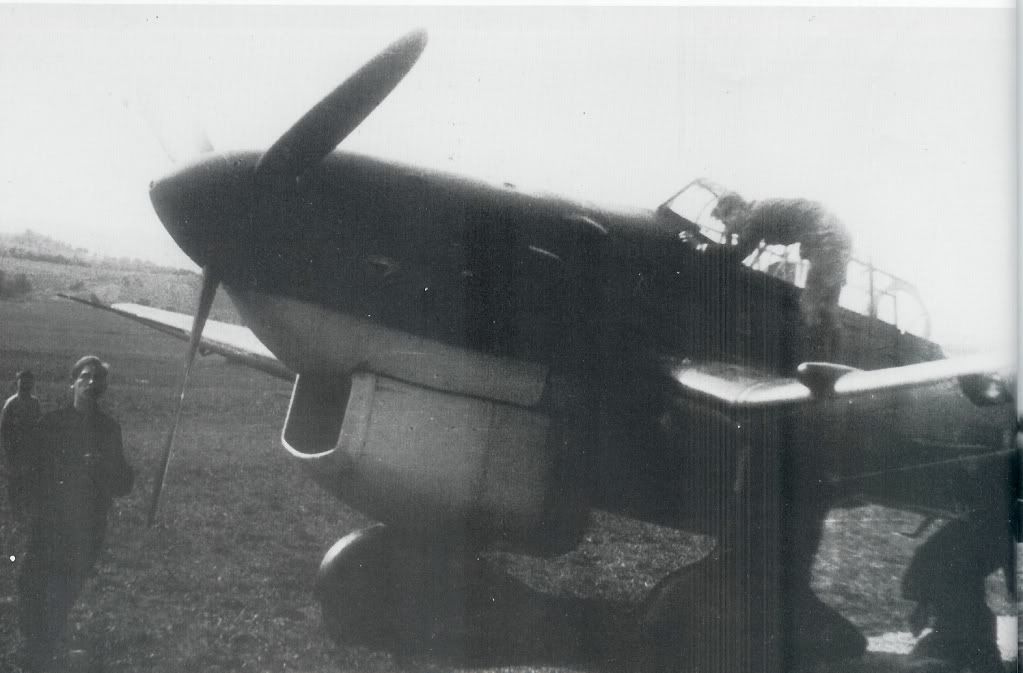 Interesting - re the picture I posted, my source refers to it as a Jumo 213E powered trial with new redesigned radiator whereas yours refers to it a a possible DB trial aircraft. Anyone shed any light?

Sorry Justo, but I unfortunately don't know German
Is this an airborne refueling trial between a He-111 and a Ju-87?

Justos post show the Ju 87 in the "Tragschlepp" (carrying aircraft tow), where the
towed aircraft is placed beneath instead of behind the towing aircraft, held by two
towing lines. An advantage should be, that the towed aircraft would need no input
from the pilot during flight.Very good described in E.Peter "Der Flugzeugschlepp von
den Anfängen bis heute"

I could be completely wrong but to me the shape of the cowling in the first picture in this thread doers not suggest an inverted V engine. It looks suspiciously like an upright V.
P

Thanks for the explanation ;D

I've seen a photo of a Ju-87 with what appears to be an Mg-15 in each side window to augment the Mg-81z. (meaning four guns on three mounts for the rear gunner).

I was wondering if anyone had information about this unusual weapons fit?

The photos don't really show exhausts, but the general look of the thing doesn't look like any reasonable DB or Jumo inverted V installation. Either of those would not need to extend below the fuselage belly line, aside from the radiator. Maybe, something more odd/mundain? like a Jumo Diesel, which would need extra depth. An upright V engine might have some hint of cylinders and/or exhaust showing, but the photo is too iffy to show.

The Luft46 entry on the Junkers Ju-187 has some nice pictures of a wartime display model and of the full scale mock-up.

Interestingly, it had some inhouse competition in the form of the EF 65/EF 87 project.
The EF 65 was a 1939 design, a single seat ground attack aircraft with a BMW 801 powerplant. This was developed further into the EF 85. Unfortunately not much more is known about it apart from what is below:

Under the Junkers Entwicklungsflugzeug (Development Aircraft) project designation EF 82 appeared, the 1939/40 design for a mid-wing single-seat aircraft intended for the ground attack and dive-bomber role. As opposed to the well-known Ju 87 Stuka dive-bomber, the proposed bombload of 1,000kg (2,205Ib) was to be housed internally in the fuselage. A wide-track main undercarriage retracting into the wing roots together with a cable-snatching tail hook was to enable its use aboard aircraft carriers. A special feature of the design was that it was to be powered by a Junkers-Jumo 214 engine - a secret development of the Junkers aero-engine division whose further advancement was not supported by the RLM, and this at a time when the aircraft industry was crying out for high-performance powerplants.

The Jumo 214 featured a front annular radiator and was housed beneath along cylindrical engine cowling. Noteworthy were the two long exhaust ducts which were not a normal feature of in-line engines. Details of dimensions and performance of the EF 82 are just as little known as the RLM judgement of the project.
Click to expand...

(not the well illustrated Ju-287 divebomberproject)

I have the same sources Arjen.

Please allow me to say I'm not
convinced that the drawing illustrates the Ju-187.

The Ju-187 had a fixed inverted tail,not a rotatable one as in the drawing.(Ju-287 first?)
It seems also that the horizontal tailplane was suported by struts as I think there
are on the photo of the windtunnelmodel.

Searching for many years about the Ju-187 , I never found a satisfying answer..

I have the same sources Arjen.

Please allow me to say I'm not
convinced that the drawing illustrates the Ju-187.
Click to expand...

That's OK. It's what I have available. If anyone has more information, I'd like to see it too.
A

Since there was a Fw 187, a good possibility exists there was not an official Ju 187 (In general, 8-nummers were not duplicated except near the very end when 8-nummers were duplicated probably to confuse allied intelligence). There are a number of images of the Attrappe for this design in the USNASM archive microfilms, I don't have them in front of me, so I cannot remember how JFM identified this design. IIRC it was not by the EF number, which I would be interested to know.

I accept there was a Ju187 design for a Stuka-successor. However, it appears two completely different designs are tagged with the Ju 287 moniker, and I'm hesitant to accept a Stuka-successor as a proper Ju 287. The attached picture shows the Ju 287 V1 of 1944. Could someone enlighten me on this subject?

Many thanks Justo, that answers my question quite nicely.
J

Thanks Justo for all the illustrations. As we can see, there is a marked difference
between the Ju-187 and the - 287 Stuka's developments..

Taken from the introducing pages of the 'Monogram Close Up nr.1 Junkers 287'

....In the case of the Ju 87 the logical development line would have resulted in
the Ju 187 and possibly a Ju 287.Originally however, the number 187 was allocated
to Junkers for its development study of a refined Ju 87 'Stuka'.
This project was known originally as the Ju 87F but due to numerous designs changes
it was decided to allocate a new designation, Ju 187.
Howevert the Ju 187 was shortlived,for an even more refined Stuka was then being advanced.
This "second generation" Stuka wa allocated the designation Ju 287 since it was markedly
dissimilar from the Ju 187 and certainly the older Ju 87 series.
Nevertheless,this project also met with sceticism from the RLM...

So far : Thomas H.Hitchcock in the above mentioned Monogram.
J

From these two fragments of text, it may be deducted that the Ju 287 denomination derived from a fusion of He 177 A-3 and Ju 288 V2. From the dialogues between Göring, Petersen, Saur, Hübner, Alpers and Knemeyer, in the meeting that took place at the RML in Berlin, on November 10th 1943 -publiched by Stephen Ranson and peter Korrell in Junkers Ju 287, Ian Allan Publishing 2008- it may be concluded that it was a Heinkel/Junkers shared project with a Ju 188 G2 and two He 177, to test the empennage and the bomb bay

Very interesting drawing Borovik. Thanks...
Strange that it does not shows the inverted tail version.

Borovick, that drawing would appear to show a Ju187 fuselage married to a Ju 87 wing without an undercarriage. Is it me or does the wing on the model of the Ju187 look quite different from the Ju87 wing?
L

It's not easy to see it on the windtunnel model but as far as I read
much of the so called 'double wing' system was retained on the Ju-187.

This system was abandoned in the Ju 287 wich used ailerons and conventional
flaps on a straight wing without dehidral.
source :Junkers Ju 87 from 1936 to 1945.Hebert Leonard Andre Jouineau-Histoire&Collections.English Edn.
T

on "wwii.modeller.co.az" I look at this photo !

What is that ?
A mock up or the first fin tail projects ?

It could be the original mock-up of the design. There are many differences to the V1 prototype, such as the shape of the vertical fins, location and style of antenna mast, etc.
By the way, the correct site URL is this: http://wwiimodeller.co.nz/tag/ju-87-v1/
Share:
Facebook Twitter Reddit Pinterest Tumblr WhatsApp Email Share Link