I am looking for informations, drawings etc. of the Junkers Ju-290E.
I think it was a night-bomber-project with a internal bomb-bay.
Maybe someone can help ?

Thanks and Many greetings

There once was a number of (relatively small) side views of the Ju 290/390
versions, including the E-version, I think in an issue of the "Fliegerkalender".
I once had this issue, but I'm not sure, that I still have it ...
It basically was a Ju 290B (similar to the A-7), with reduced armament, AFAIK
just with one dorsal turret, instead of two, and with a bulged bomb bay
Tomorrow I'll look up on the attic, but now it already is dark and there's no
lighting .... :-\
M

All I could find was the drawing in my old, very old collection of aircraft drawings
in 1/1250 scale, but I cannot find the original still yet. And now, I'm not even sure,
what the original source was, but I think, I'll ask in the german Flugzeugforum, as
it was a german source. At least this I know for sure ... :

Hi pometablava
THANKS FOR YOUR GREAT DRAWING !
Many greetings

There was also proposed version C, D and E

Just posted by the San Diego Air & Space Museum (SDASM) on their Flickr Photostream from the Jack Canary collection, a couple of color photos of the captured Junkers Ju-290 (Ju-290A-5, to be exact) "Alles Kaputt." Plenty of other color gems in this collection. Check them out here (link) 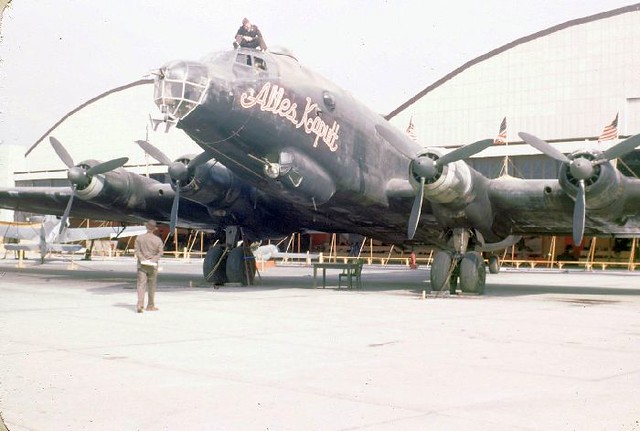 BTW, the writing on the fuselage side "Alles kaputt" (everything's busted) was made AFTER the war
and wasn't a kind of squadron slogan or personal in scription, as could be often found on allied aircraft.

It focuses on the Spanish Ju 290A-5 which ended up in Spain, post-war.

Perhaps interesting to the non-German speakers here:
My interpretation is, that those container were used as tanks.

Thanks Jens! I love this aircraft.


for Germany language,I know only a few words,it is lovely one,but
unfortunately I didn't study it.

hesham said:
for Germany language,I know only a few words,it is lovely one,but
unfortunately I didn't study it.
Click to expand...


I don't speak Arabic, nor Japanese or Russian and my French is lousy (can proof the latter with my school certificates ! )
But we have members here, who are native speakers of those languages, or at least speak them fluently, so help in
understanding a text (about aviation), without the danger of misinterpretations generally is just one post away.
That's what such a forum is good for, too !

fightingirish said:
One of the options was the Ju-290 in Spain.
Click to expand...


Very interesting, you should post this in the Flugzeugforum, What-If section ! A Ju 290 in the
old Lufthansa livery certainly would look great !
(Photo from http://dmm.travel/typo3temp/pics/Super_Constellation__6a732c2717.jpg)

On April 6th, 1945 the Ju-290 A-5 (Wk. no. 0178), D-AITR, "Bayern" of Luft Hansa, crash-landed in Barcelona, Spain. The undercarriage got broken during landing. In 1948 a Spanish business man bought it and 2 with former Luft Hansa employees it was repaired ready to fly again. It was also planned to use it during the Berlin Blockade in 1948, ( IMHO probably with Allied or no national markings,) but that plan was cancelled for political reasons.

When the German Lufthansa was reformed in the early 1950's, it was looking for aircraft to operate. One of the options was the one Ju-290 in Spain. Negotiations were conducted with the Spanish to acquire the aircraft for the Lufthansa in 1953. Worries about the lack of spares and the possibility to purchase Constellations and Convair 340's made that the deal didn't come through.

An A-5 (Wk. no. 0178), Bayern of Luft Hansa, which had been interned at Barcelona, was acquired by the Spanish and was eventually used by the Spanish Air Force from 29 April 1950 to 27 July 1956 as a government transport of personnel for the Superior School of Flight in Salamanca. It was scrapped due to a lack of spare parts in May 1957 following an accident.
Here are some pics of the Ju-290 used after the war until the 1950's. One picture is right after it defected from Germany March 1945 with "unknown" passengers. After it crash landed everyone booked and the Spanish took it on and repaired it.

So much for that ! Thought it was a good idea ....
Got today "Ju 90" by Helmut Bukowski and Fritz Müller, describing development and service of the Ju 90 and 290.
There's one photo, that rang a bell. Just have a look and judge for your own ...

I don't think it was necessary at all to repost the very same set of pictures as you did. They were not really improved version, you merely doubled the dimensions of each file in an image software... Only post a previously found image if you can really offer a higher resolution/definition version from a different scan, not just a blown-up picture!

What I tried to point to: This "photo" of the Ju 390 seems to be faked from the Ju 290 photo. The edges look
too dark, too accentuated, the codes, too and the whole position is the same. To my opinion, we have an example
of pre-PS faked photo. Actually there are authentic photos of the Ju 390, but maybe, they still had not surfaced then,
so to the time some did it on his own.

"Ask Kammler! He has all the answers."

"Ask Kammler! He has all the answers."
Click to expand...

With Friedrich Georg as author of the article about the "Ghost aircraft"?
Good reading certainly, good for a laughter ! ;D

fightingirish said:
One of the options was the Ju-290 in Spain.
Click to expand...


Very interesting, you should post this in the Flugzeugforum, What-If section ! A Ju 290 in the
old Lufthansa livery certainly would look great !
(Photo from http://dmm.travel/typo3temp/pics/Super_Constellation__6a732c2717.jpg)
Click to expand...

The Connie was for a number of years the epitome of first class world travel.

Transferred from hesham post in the "Various Junkers projects" thread:

Anybody have some good links about the alleged Ju-390 flight that took pics of New York and/or Michigan? This flight and the slight controversy behind its occurrence has always fascinated me.
J

Here's something on the matter..

Well at least there's no mention of a Bell of Nazi UFOs. Thank you.
J

If you do have evidence of secret Bell involvement (not P-59, X-1) in post-war Nazi/Operation Paperclip stuff,

XP67_Moonbat said:
Well at least there's no mention of a Bell of Nazi UFOs. Thank you.
Click to expand...

Opps, 'fraid you spoke too soon, he mentions a Ju 390 flying 'the Bell' to Argentina here:
https://sites.google.com/site/junkersju390/

He also has pages on Nazi A-bombs and 'the Bell'. So I'd take his Ju 390 pronouncements and claims
with a mine worth of salt. :
J

But weren't salt mines a favourite location for late-war Nazi-tech?

Alcock & Brown got their Vimy bomber across the Atlantic couple of decades earlier, so it aint such a big deal.

True there were other long-distance flights before and after the war. But those are well documented. The fact that this one is in dispute gives it that slight mythical edge.


here is a profile drawings to some variants of the Junkers Ju-290.