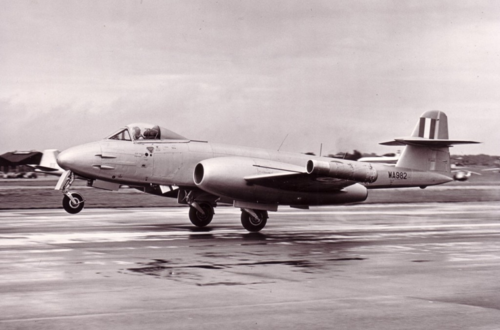 Some other Meteor variants:

Did these versions get their own Gloster P number?

All photos were found from the link below, from where you can find the performances and specifications of these aircraft as well.

Maveric said:
Did these versions get their own Gloster P number?
Click to expand...

I am currently unsure. I don't believe the French ones do (8-11), but the British ones might. I will have to do some further research on this topic.

IIRC John Forbat's "Secret World of Vickers Guided Missiles" has a picture or two of a Meteor with Folland's early version of the Red Dean missile on its wingtips, and BSP 4 might have it as well.

British Secret Projects 3: Fighters from 1935-1950, by Tony Buttler, contains numerous built and unbuilt versions of the Meteor. These are:

P.203: High-altitude variant of the Meteor, with Derwent 5. Came with a greater wingspan, which had squared off ends.

P.309: Eight-gun Meteor, fuselage of the F.8 with the wings of the NF.11, a truly formidable aircraft.

Regarding Maveric's question above (Post #44) about whether the experimental Meteors received Gloster's "P." designation system, it seems that some did carry one. Does anyone have any drawings or artwork of the aircraft mentioned above?
J

Hi! There was not a ejection seat for Prone Positioned forward pilot! He had only a parachute. https://www.secretprojects.co.uk/attachments/548-jpg.636262/
https://alchetron.com/Gloster-Meteor-F8-"Prone-Pilot"
http://www.karaya.pl/en/r-v-aircraft/0/gloster-meteor-1-72-detail-scale-aircraft-drawings-rv1003.html?ref=/en/r-v-aircraft/0/3/1/items.html
http://wp.scn.ru/en/ww3/f/204/9/6

If the Meteor had any future development potential, then this was the obvious stepping stone towards that.
J

If the Meteor had any future development potential, then this was the obvious stepping stone towards that.
Click to expand...

Though the turboprop version had some potential as well.

I'm intrigued by the P.263, the Delta winged Meteor! Any drawings or maybe photos of the prototype if ever built?
Y 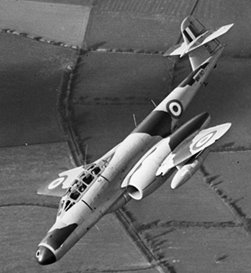