A variety of Meteors were used as engine test beds (usually flying) including the following;

Dear Justo
Thanks for the three view and also for details of engines.
Thanks. bye
K

Or was that just a proposal?

KJ_Lesnick said:
They flew an aft-fan turbofan in the 1940's?

Or was that just a proposal?
Click to expand...

It didn't fly but was built and tested successfully. There's a surviving example in the Rolls-Royce Heritage Trust in Derby.

The Metrovick Beryl axial - flow Meteor serialled RA-490 ,
was later replaced with Rolls-Royce Nenes ( Jet Deflection units ).
The RA-490 became a STOL Meteor and a forebar of the Hawker
Kestrel .
The airframe was modified , a F.Mk.8 tail and end plate fins on the tailplane.

Was that the worlds first turbofan (to be tested)?
T

hi Shwalow.
I never see something about this plane.i'm curious !
but i've see a little drawing of a model with the
reference "FR 9 with vertical engine"
It's a Meteor which has,with the normal engines
a third engine
and an air intake behind the cockpit ???
Is this true
Thanks
J

From "The Gloster Meteor" by Edward Shacklady
Macdonald Ed.

Dear Justo.
Very, very interesting, I thank you very much.
I've never see this.
My little drawing seems to be the VZ 608 but here I'm sure
that this is true plane !
THANK YOU
Bye
S

I've been trying to find photos of the elusive first Gloster Meteor F.1, which carried serial number EE210. This aircraft was traded with USAAF in exchange for a Bell XP-59 Airacomet. All I could find was this color profile... Can anyone help?

From my P-59 book published by Ginter Books. -SP

Fantastic! Now we need the "other" part of the RAF/USAAF deal... Oh, here it is! Look at post below.
S

EE210/G, the very first production Meteor F Mk.1, was not actually "traded" for an Airacomet. Rather, it was a mutual evaluation process. The aircraft was dispatched to the USA after making its first flight on January 12, 1944, being flown again at Muroc Flight Test Base in California on April 15. It was returned to England after being slightly damaged, and was later used for trials at RAE Farnborough.

Hi,
Maybe Whittle produced a test engine before that?


KJ_Lesnick said:
Was that the worlds first turbofan (to be tested)?
Click to expand...

From Meteor by Bryan Philpott

Some details on the A.W. developments of the NF.11, these match the images GTX posted earlier.

Bristol in February 1955 drew up a blown-flap testbed conversion of the Meteor with four Turbomeca Palouste in the wingtips which would blow air through a 0.04in (1.02mm) slot on the outboard flaps. Plain inboard flaps would be fitted and the ability to droop the ailerons added. WA546 was allocated for conversion but the work was never carried out. I don't know what, if any, designation Bristol applied. Nothing in the Bristol designation list seems to cover this aircraft.

And then there is this beauty.

"British Military Test and Evaluation Aircraft: The Golden Years 1945-1975" by Malcolm V. Lowe is filled with experimental and one-off Meteors.

Some of them are:

EE227/G: originally featuring a cut down tail, later tested out RB.50 Trents (The "G" in the registration number stands for "Guard", meaning an armed guard was always present when this aircraft was on the ground)

RA435: used to test the Derwent 5s, fitted with afterburners

toura said:
hi Shwalow.
I never see something about this plane.i'm curious !
but i've see a little drawing of a model with the
reference "FR 9 with vertical engine"
It's a Meteor which has,with the normal engines
a third engine
and an air intake behind the cockpit ???
Is this true
Thanks
Click to expand...

FR.9 VZ608, RR RB.108 testbed for the Short SC.1, also the first jet fitted with thrust reversers. Survives at the Newark Air Museum, Notts on loan from the RAF Museum and is the last surviving FR.9 variant, too.

The prone pilot Meteor F.8 WK935 survives at the RAF Museum Cosford in all its awkwardness.

...And my personal favourite Meteor testbed, Ferranti's Meteor NF.14 G-ARCX began life as NF.11 WM261 and was progressively modified through the night fighter variants to become the prototype NF.14, before beginning a career as a testbed for radio equipment, then a hack with the Ferranti Flying Unit at Turnhouse. The aircraft is preserved at Scotland's National Museum of Flight.

Maybe this will be of interest: 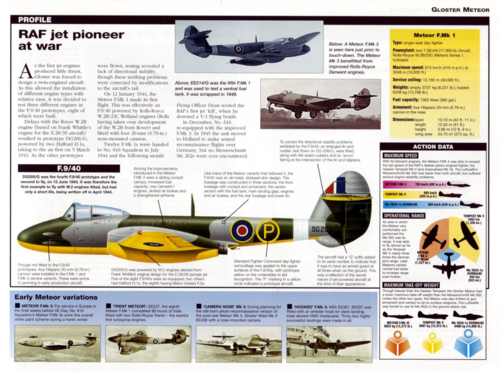 I've attached some of my drawings of the various private-venture, ground-attack and armed-trainer Meteors.