the source of Focke Wulf FW.354 is the book; Rotorcraft of the Third Reich

We're not the only ones, taking those designations with a pinch of salt. Until we get a
confirmation, we should be a little bit careful with its use, I think !

Just an interesting side note (at least to me) is the mention of a report by Erich von Holst (zoologist),
Dr. Küchemann (aerodynamicist, working for Focke-Wulf during the war) and K.Solf in Steve Coates
"Helicopters Of The Third Reich". E.von Holst had built two successful indoor flying models based on the
flying technique of a Dragonfly. This principle, using flaping wings was scaled up and led in the end to
the fuselage mounted rotor of the "Triebflügel".

i wonder if Focke-Wulf presented that concept to Reichsmarschall Herman Göring...

It is said in the mentioned book, that this report was published in the "Jahrbuch der deutschen
Luftfahrtforschung 1942", where already ways to develop a VTO tailsitter were described. The
then still missing component, the ramjet, was added byDr.Otto Pabst and a report submitted
to the RLM in 1944.
Don't think, that today anybody would start such a project with considering flapping wings !
Another detail mentioned are different layouts for positioning the rotating wings and the cockpit,
see below.

Couldn't resist to try to sketch the Triebflügel pre-study with the cockpit behind the rotor wing.
The layout with the wing at the extreme nose was regarded as probably giving problems with
the weapons installation.
(For this one I spoiled the drawing from http://www.aviastar.org/helicopters_eng/focke_thrustwing.php)

This is incorrect I'm afraid...

No Focke Wulf P number is given in the No.23 Flugzeug Profile text.
Text for the drawing on p.41 says

There is also no source for the Triebflügel designation
in Rotorcraft of the 3e Reich (FW-354) Mushroom.


we know for Focke Wulf,the number 0310 or 310 is a reference to "P" series,and when the
author wrote under the drawing 310240,what is that meaning?,I think he meant the "P"
aircraft or projects series.

Internal project numbers, as we know them weren't longer, than three digits, I think. And the number "0310..." was used for
vrious other Focke-Wlf projects, too, so I'll agree with lark that the give number is no direct indication for the Fw P-number,
which is still unknown then.
I know, that those numbers, which are quite probably just drawing numbers, were given as project numbers in several
publications, for example in Novarras volumes "Die deutsche Luftrüstung", but it should be confirmed before taken as a
hard fact nevertheless.


I agree with you,those are a drawing numbers,not designations,I think that's
a good analysis.
S

My theory is that the prefixes such as 0310- may indicate the design bureau or maybe simply the office or facility from which the designs emanated. The second number would then indicate that this was, for instance, the 310240th drawing to be done by that office or team. Just my two cents.

Hi! Focke-Wulf Triebflügel(pinion)
Luft46 says that....
"This Focke-Wulf VTOL (Vertical Take Off and Landing) fighter/interceptor was designed in September 1944. The three untapered wings rotated around the fuselage and had a gradually decreasing pitch towards the wingtips, thus acting like a giant propeller. At the end of each wing was a Pabst ramjet, Since ramjets do not operate at slow speeds, either the rotor had to be driven by a fuselage mounted takeoff-booster or small Walter rocket engines could have been fitted to each ramjet pod. The pilot sat in a cockpit near the nose and the armament consisted of two MK 103 30mm cannon with 100 rounds plus two MG 151/20 20mm cannon with 250 rounds. Although the Triebflugel was not constructed, a wind tunnel model was tested up to a speed of Mach 0.9. "

You can see small Walter rocket engine in engine drawing. 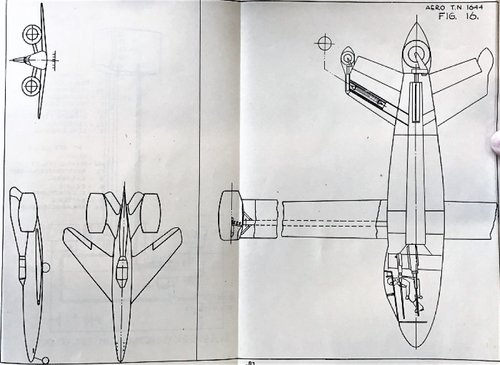 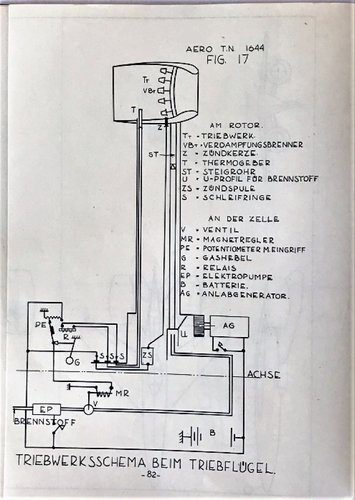 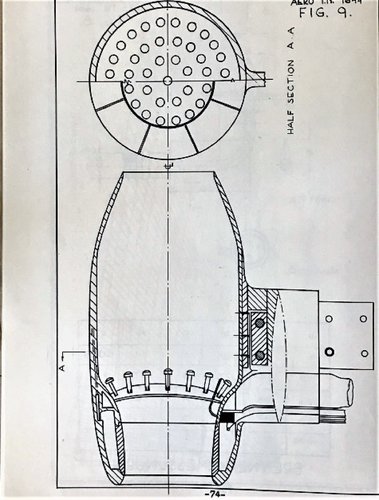 Whilst wiling the time away during lockdown I began watching the Marvel Cinematic Universe films, some of them for the first time and I noticed that the baddie in Captain America; The First Avenger flees a scene in one of these. Take a look at Marvel's reimagining of the Triebflugel. If you don't want to watch the whole scene, skip to 2:42.