About 10 years ago Air Enthusiast published an article on CAC projects. One was, if memory serves, the XP 65 Warrior, a stainless steel supersonic fighter bomber. AE reproduced a small scale picture but very little information. Does anyone have further information or pictures on Commonwealth supersonic projects?

I don't know the project XP-65,but I have a picture of CAC-31
mock-up from my dear Jon.

I only have the AE article, no more info available :'(

Here are some pics from them. First the XP-65: 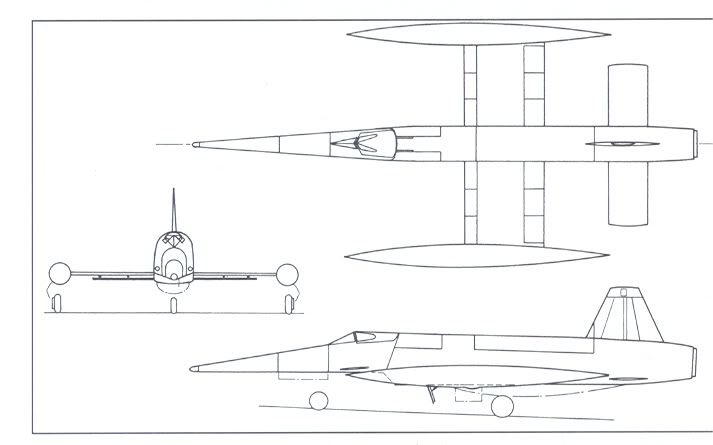 And the related XP-68 - this was also to be built of stainless steel. It was to be powered by a RR Avon RA19R. It also had provision for a search radar. Armament was 2 30mm cannon + 1 missile on each wingtip + another semi-recessed under the fuselage. It was to be Mach 2 capable and was largely seen as a competitor to the F-104

probably the XP-65 and -68 weren't "absolute stealth" designs ?
But I know those technical problems, just today I could make my
scanner work again :
Here the mentioned pictures of the AA-107 and another view of the
Ca-31 mock-up :

For the CA.23 see in designation system, http://www.secretprojects.co.uk/forum/index.php/topic,1213.0.html
and for CA.21 it was a furhter 250 Mustangs,but was cancelled.

Some more Pics of the CA.23 (including mock-up pics): 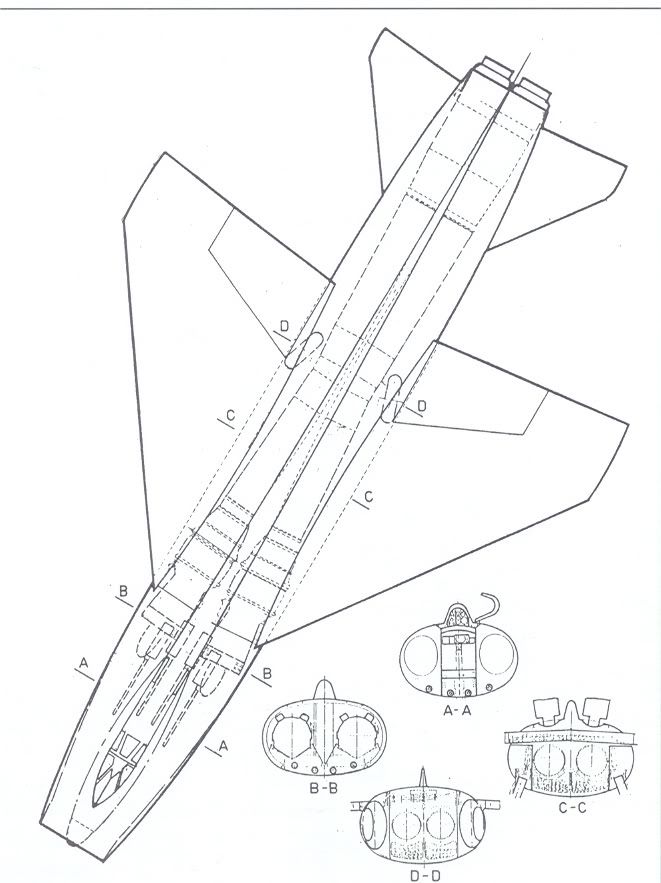 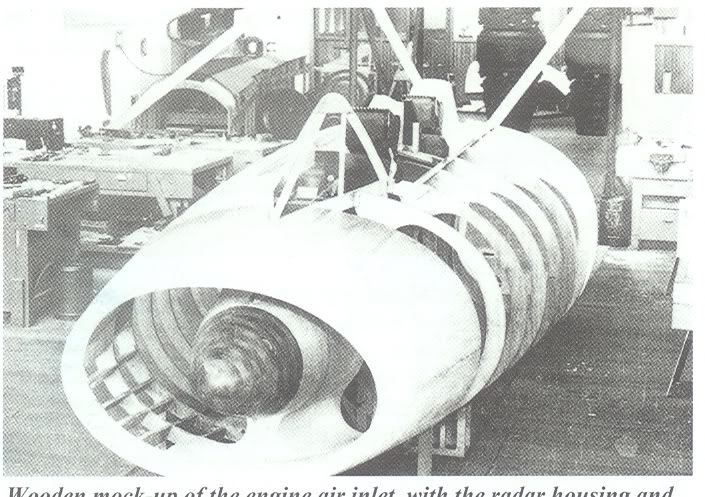 Other interceptor proposals from CAC included: 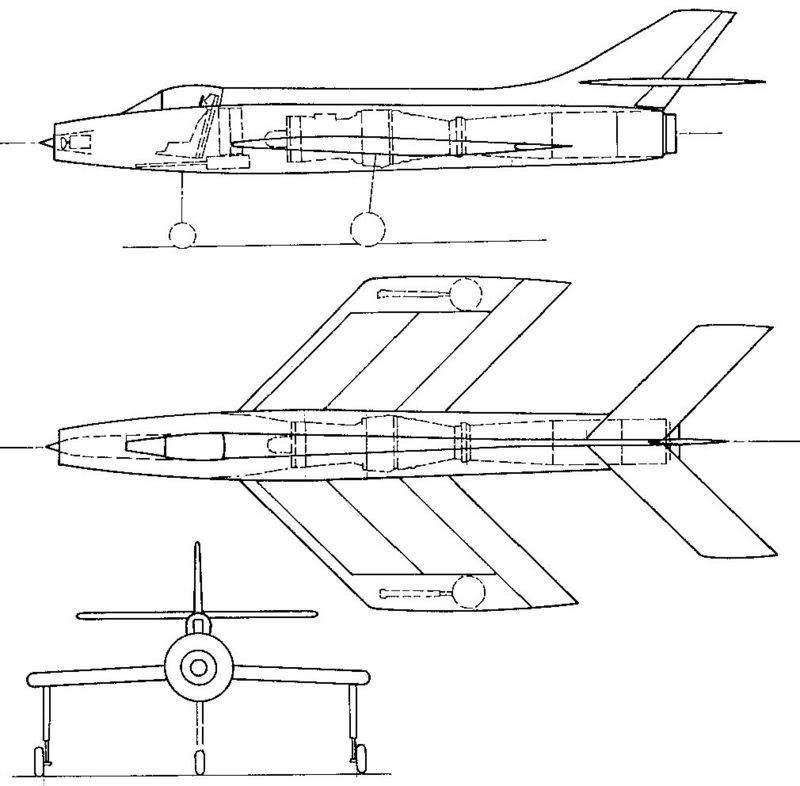 This was followed by a Rocket (probably using similar motors to the Bell X-1) powered interceptor, the XP-47. It was to be armed with six 3inch Oerlikon or Mighty Mouse type rockets:

Finally, there was the XP-62. This was to be a four-engined light(?) interceptor poweed by for RR RB93 Soar jets with a thrust to weight ratio of 6.77:1. Given the life of this engine at Mach 1+, it was expected that an engine change would be required after every 4 to 5 missions! It was also planned to be armed with rockets: 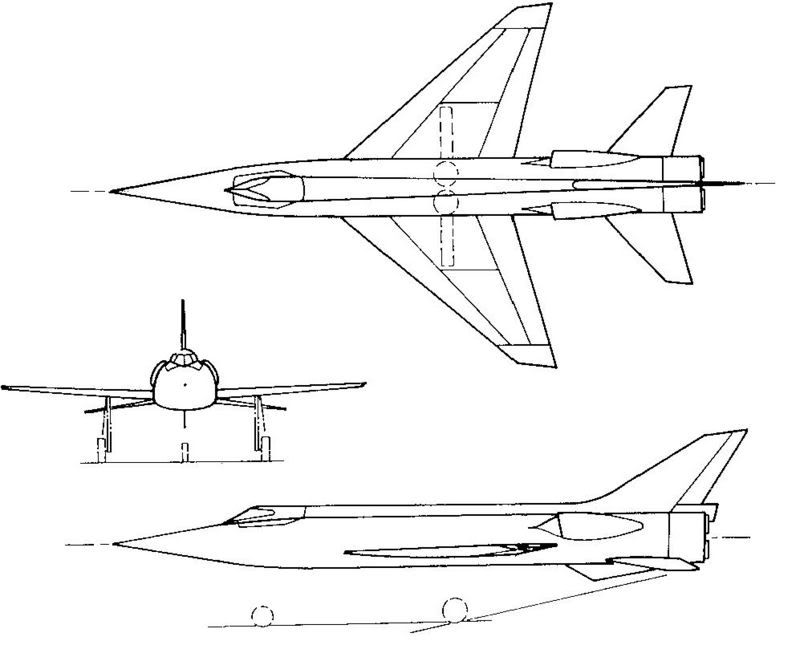 The designation CA-24 was reserved for a proposed licence version of the Hawker P-1080.

Sorry GTX, I just had to follow my own signature ...
Some browsers ( e.g. Firefox) are blocking hotlinked attachements without warning ! :
Ok, now I can see your photos.
A

Maybe this sounds stupid but...

this variant of the CA.31 seems quite different from Uncle lee's resin model of the CA.31.
http://www.fortunecity.com/meltingpot/portland/971/Reviews/raaf/ca-31.htm

What variant did the mockup represented? the two J-85 or the single RB-172 variant ?

What happenned with that pic - its a BGV International ship concept???

BTW, There was a pic of a superb model of the CA.23 that someone did last year (I think it was on Modelling Maddness and was from a Melbourne show) - I believe it may have been a scratch build though.

GTX said:
Some more Pics of the CA.23 (including mock-up pics):

Do you know the CA-23's dimensions and other specs? I presume the engines were to be the Avons. Am I right?

Australian project from the 60's, delta wing, RB-172 engine (another aircraft powered by this prolific family of engines )
Mach 1.5, the aim was to train RAAF pilots to the Mirage IIIO. In the end the role was filled by both Aermacchi MB-326 and twin-seat Mirage III.
I have the air Enthusiast article on Australian designs, but I'm deseperately seeking a 3-view of this project (and more pics of the mockup, I know it has been preserved).

PROGRESS WITH THE CA-31

ADVANCED-TRAINER PROJECTS make news these days and reflect the importance of offering sufficient performance to simulate as many as possible of the characteristics of the type of aircraft which the pupil pilot will eventually fly. Last week we described the Dornier Do P375 universal trainer; this week we illustrate a mock-up of the Commonwealth Aircraft Corporation Pty CA-31 operational trainer, proposals for which were submitted to the Australian Government last winter.

Forward planning by the Commonwealth Department of Air—as shown by its acquisition of the Mirage IIIO and, soon, the F-111C- indicated the need for a supersonic two-seater as a logical follow-on to the Macchi MB.326H which will be used for the primary training programme (the first Australian-built MB.326s will fly next year). While, therefore, the Department of Air was evaluating a number of aircraft already built and projected, the CAF drew up a specification for the CA-31. This trainer is probably unique in having a delta wing, most existing delta trainers having been developed from existing operational aircraft. The design is clearly aimed at providing delta-wing training for the Mirage, notwithstanding the existence of the conversion trainer - the Mirage IIID - already in service with the RAAF.

The CA-31 has been engineered to produce an effective, versatile, supersonic jet trainer which can be operated effectively in a number of roles. The design emphasises low weight, simplicity and excellent handling, together with minimum maintenance and logistic support requirements. With a 21ft-span double delta wing (similar to that of the Draken) go a swept fin and rudder. Full-span elevons provide control in pitch and roll. Overall length is 37ft. The estimated approach speed is 120kt, while the landing and take-off runs are 2,050ft and 1,200ft respectively.

While the gross weight in the training configuration would be 8,500lb, no decision has apparently been made about the selection of the powerplant; but CAF thinking is now turned towards a single turbofan providing 4,600lb of static thrust or 6,900lb with afterburner. This engine could well be the Rolls-Royce/Turbomeca Adour which has been selected for the Anglo-French Jaguar trainer/strike fighter, but the Bristol-Siddeley Snecma M45 series of engines offers an attractive alternative. The speeds at high level and "on the deck" are understood to be Mach 1.5 and Mach 1 respectively.

The aircraft is, according to CAF, readily adaptable to light ground-attack duties and guns, rockets, bombs and missiles may be carried for advanced training or operational use.
Click to expand...

Added from other topic, posted by Jemiba

Thanks for that - there is also a fairly close approximation of the CA-31 by Peter Hobbins on the whatifmodelers site:

Obviously one got real value for money in those days...
J

I don't know about the P223 designation, but this is the CAC CA-23 - see more (including mock-up pics) here:

GTX said:
I don't know about the P223 designation, but this is the CAC CA-23 - see more (including mock-up pics) here:

My source , AIR ENTHUSIAST Nº 63 ,uses the P223 denomination , as you may see at the lower section of the drawing I seen yesterday.
When using the "Search" option on the CAC P223 dit not get anything.It happens sometimes...

As for the CA-23 there is an interesting webpage on this project. You may find it at http://jet-flight.net/ca23.html.

Has anyone got a decent line drawing that also includes a side view of the CA-23?

Does anyone have or know of any 3-view drawing or side profile drawing of the CA-31 design???

I'm not sure if you look for something I've attached below. But there are the CA-31's three-view drawings of a kind.

Thanks Petrus very much!
These are great!
I hope that I may be able to find larger copies, as I am going to attempt to get some 'What If' profiles done of these in both a combat and trainer variant (Hint Hint GTX ;D

There is a full size Ca-31 mockup in the back of the Australian National Aviation Museum, at Moorabbin Airport near Melbourne, Australia.

The mock-up is disassembled and against one wall (easily missed). Pics were taken with my phone a couple of years ago: 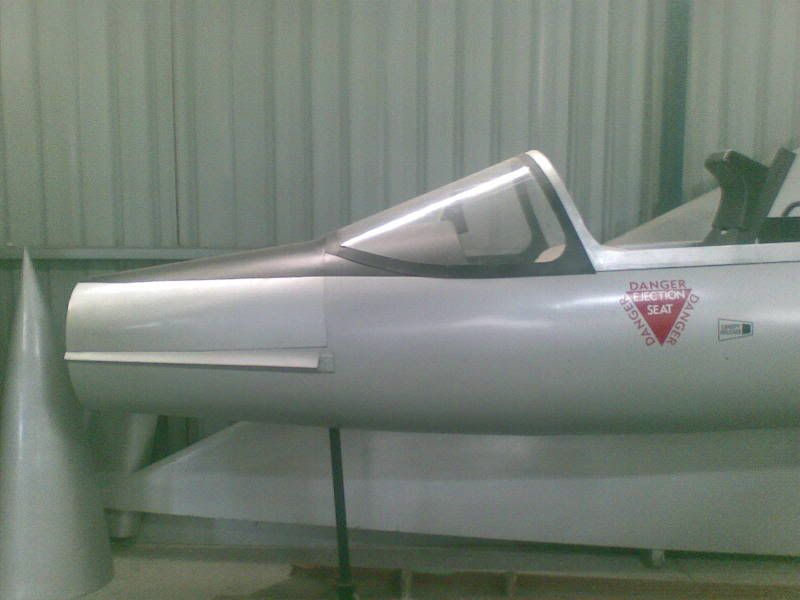 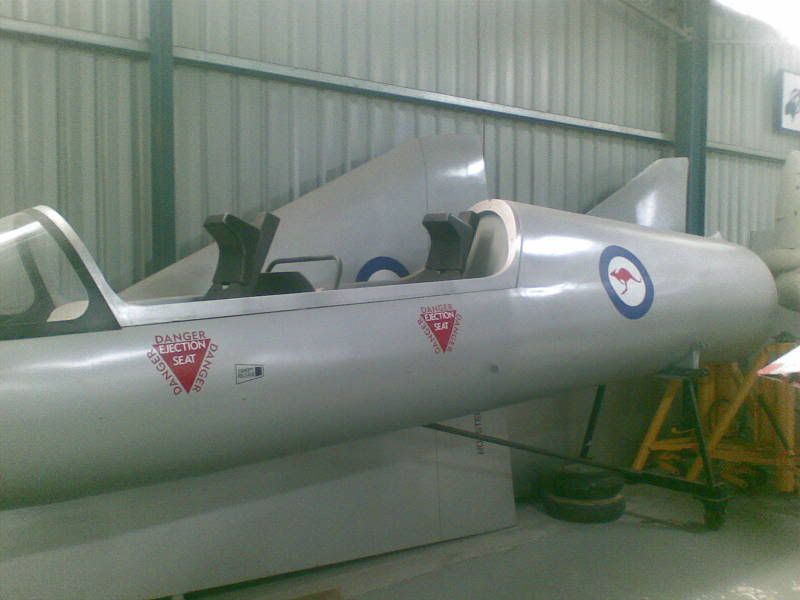 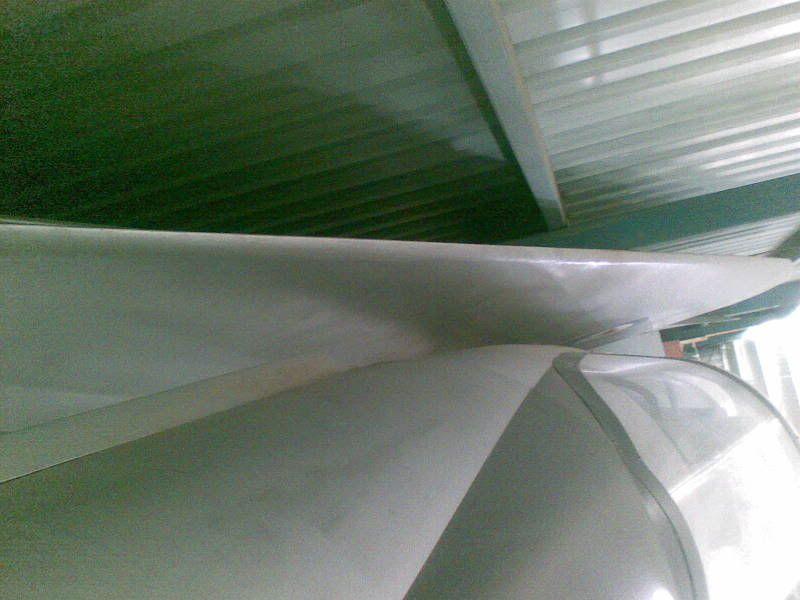 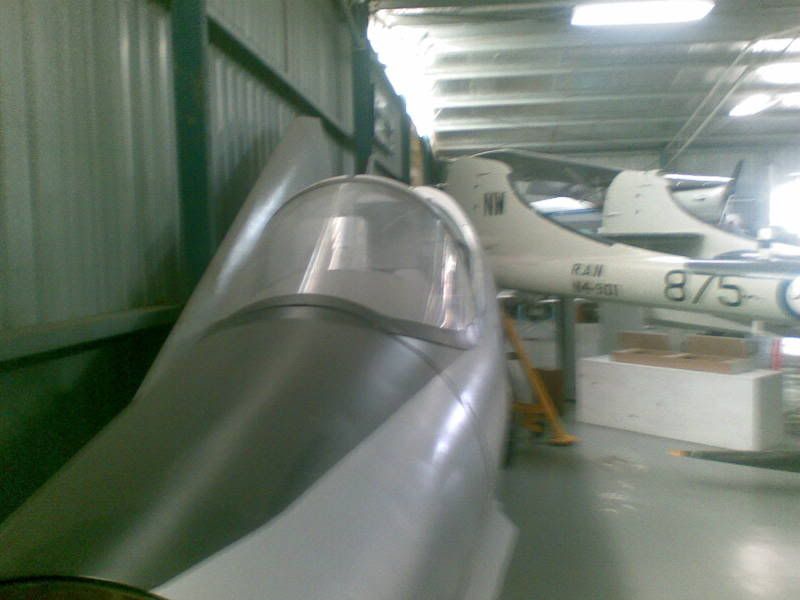 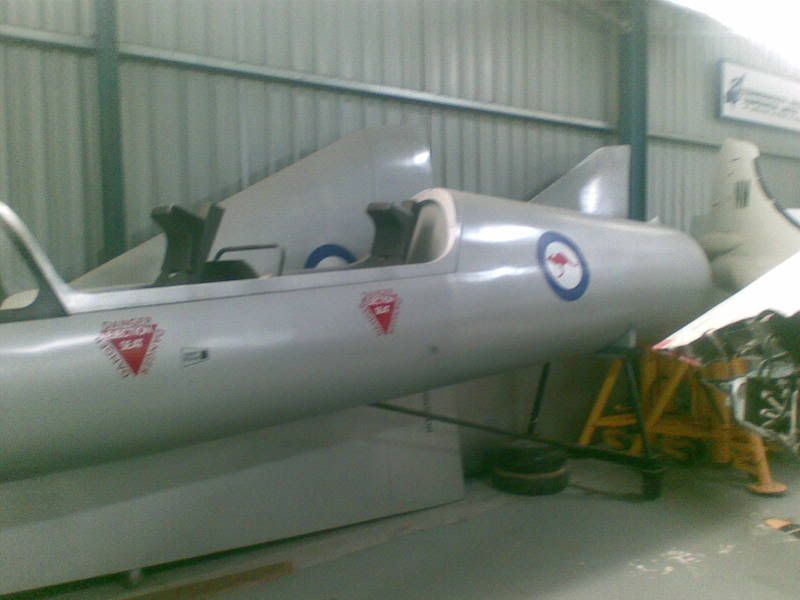 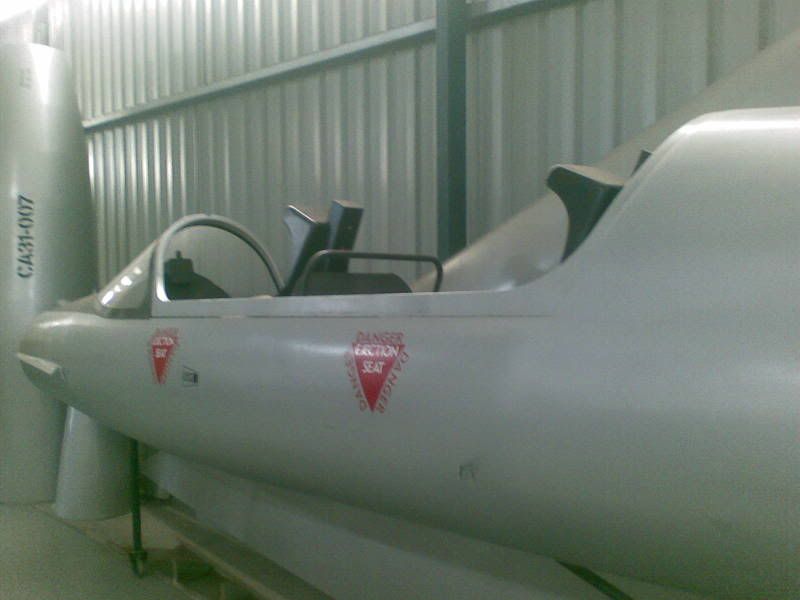 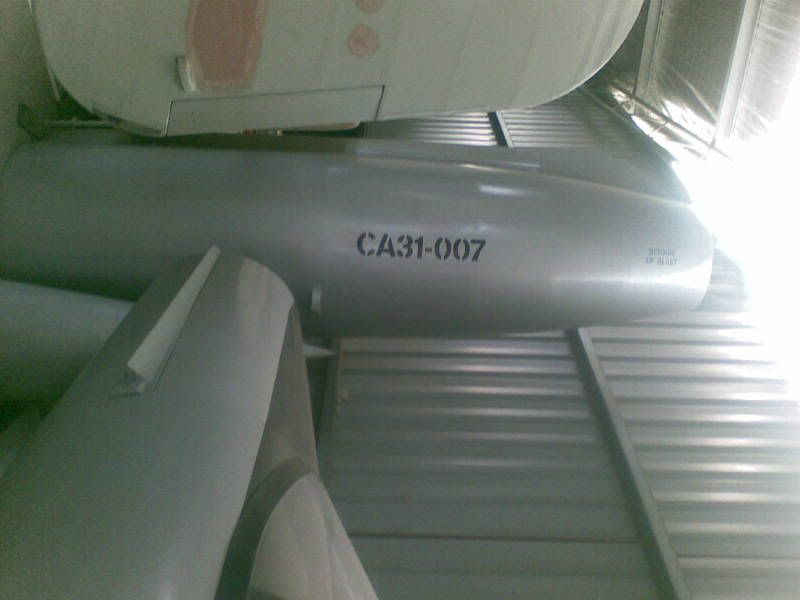 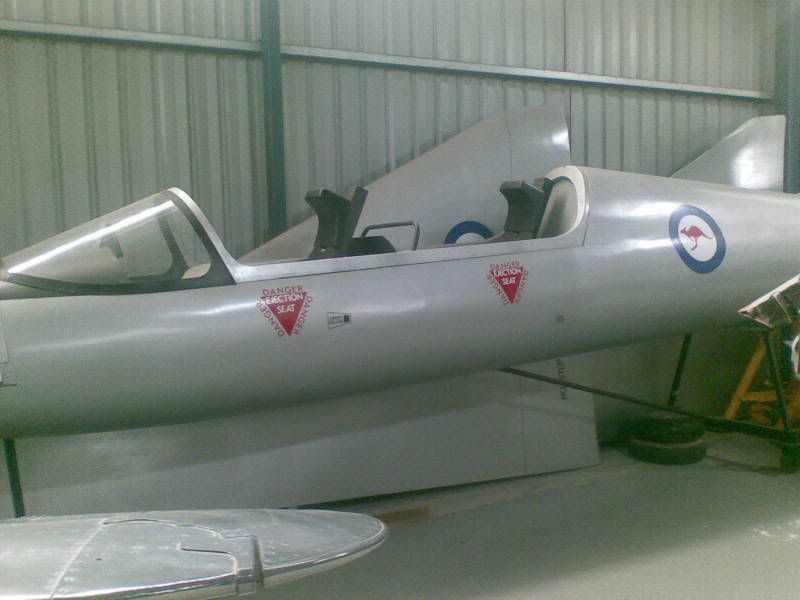 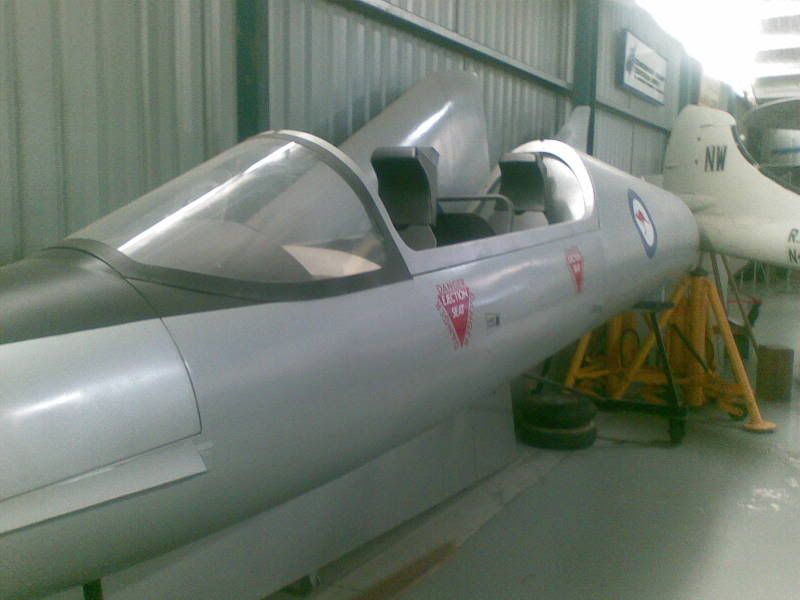 Petrus said:
I'm not sure if you look for something I've attached below. But there are the CA-31's three-view drawings of a kind.

Well, some time ago I downloaded it from another forum, I can't recall now which one.

Petrus said:
I'm not sure if you look for something I've attached below. But there are the CA-31's three-view drawings of a kind.

From the instructions from the Uncle Les 1/72 CAC CA-31 resin kit Greg ;D

I should have guessed - thanks. Will ask Les about a copy next time I'm talking to him - might try to get a high res version.

Would anyone have the CA-23 drawings of which snippets are shown halfway down this page?
http://jet-flight.net/ca23.html

I've been trying to find contact details for the author of that article, Denis O'Brien, but without luck.

Skyraider3D said:
I've been trying to find contact details for the author of that article, Denis O'Brien, but without luck.
Click to expand...

I won't post his (or anyones) contact info out here in the world in front of the IRS and everybody, but enter "jet-flight.net" into the whois search at that website and it'll hook you right up.

Thanks! I actually did try a WHOIS for that domain, but clearly not on the right website as my search didn't get further than the contact details of the site's webhost.

You just needed to go one step further.