Why not gyro stabilized helo deck ?

That helps 3 of the six degrees of freedom the deck has. You are still left with three translational movements, all occuring at the same time.
S

Why not a magnetic system?

I had wondered what Lockheed was thinking, but particularly with respect to the extremely poor turnover angle. The Convair delta-wing configuration had an advantage from that standpoint as well as providing a high-angle-of-attack capability that allowed a more or less level-flight transition when converting back to propeller-borne flight. It turned out that Lockheed had thought about both. In the L-200 proposal, they suggested a special landing platform manned by an LSO to allow ship-based operation. (It's not clear in the illustration, but the landing platform was mounted on actuators that stabilized it so it stayed level in roll; the ship's pitching motion was to be accommodated by a net that would be pierced by the aft end of a tip tank.) The pilot was to fly through a vertical-flight autopilot on approach, coached by the LSO. Once in position over the landing platform, the pilot would chop the throttle on the LSO's call when the deck was reasonably quiescent. Shock-absorbing struts on the tips of the tail fins would engage a net on the landing platform so the airplane could not slide. Note that at this point the airplane had three tail fins, not four. With respect to the transition advantage, Lockheed claimed that it would be achieved through the use of an autopilot. (The Navy OS-122 allowed a maximum altitude gain of 500 feet when going from wing-borne to propeller-borne flight but Lockheed wasn't about to cede any advantage to Convair.)

So, at the end of a max performance flight with a 1950s vintage gas turbine, sitting in a high power hover, waiting for the LSO to call "deck steady". Sounds a little tense to me.

From the cover of Western Aviation 26th Annual Directory, April 1954, artwork for the XFV-1. Being a magazine cover, it was pretty well scratched up but nice to see nonetheless.

Cool illustration Mark! Here's another thread on the XFV-1.

Thanks - put it there too.

PROJECT HUMMINGBIRD (USN/USAAC- 1946/7): This Project is mentioned in both the Steve Ginter books on the XFV and XFY, it is mentioned by Joseph Chambers in his numerous NASA Langley histories in the VTOL chapters and his book "Radical Wings & Wind Tunnels", and most recently it is referred to in Bill Rose's new book "Vertical Take-Off Fighter Aircraft". I don't have Mr. Rose's contact, but on talking to Mr. Ginter and Mr. Chambers neither has ever seen any original documentation on this project. I have looked in the Archives, checked with the Wright Patterson historians, as well as the Air Material Command historian, and have been unsuccessful. Any help would be appreciated.
W

Further to the prone-pilot Chana variant of the Convair XFY-1, sorry if this is old news but Robert E. Bradley’s ‘Convair Advanced Designs II - Secret Fighters, Advanced Aircraft, and Unique Concepts 1929-1973’ mentions a proposed two-man development of the prone Pogo which would have had two crew-nacelles, one on each wing-tip.
(Thumbnail below – the two-nacelles design is at the bottom. If the attached is too big, I will of course remove it post-haste.)
See sample pages from Bradley's book here:
http://web.ipmsusa3.org/content/convair-advanced-designs-ii-secret-fighters-advanced-aircraft-and-unique-concepts-1929-1973
Thanks, ‘Wingknut’

Did Walter H. "Walt" Barling - father of the Barling Bomber, beat Convair (XFY-1) and Lockheed (XFV-1) to the punch with the creation of a VTOL airplane design in 1940? -SP

Some snapshots of art-work apparently showing the Chana prone-pilot / gun-pod variant of the XFY-1 Pogo
Taken from a video I'm not otherwise overly impressed with, I must confess:
https://www.youtube.com/watch?v=WxVWH9mOYGA

Neat stuff, but what a terrible idea. What would the forces have been like on a pilot in quick roll in combat?

Steve Pace said:
Did Walter H. "Walt" Barling - father of the Barling Bomber, beat Convair (XFY-1) and Lockheed (XFV-1) to the punch with the creation of a VTOL airplane design in 1940? -SP
Click to expand...

That was some nice find! Wish I could have thanked Steve for it. Indeed, Mr. Barling seems to have been ahead of his time on quite a few occasions—not always with ideas that ended up working, unfortunately... (only his Nicholas-Beazley NB-3 reached some degree of success, being produced in quantity; the NB-4 was also produced but didn't fare nearly as well)
N

Is there any confirmed data on the max speeds attained for either aircraft? The XFV-1 was obviously hampered by it's landing gear rigging, so I'm particularly more interested in what the Pogo achieved.

I just feel like it should own the prop world speed record with it's kind of power to weight ratio, though I can see the induced drag of the delta wing and the parasitic drag of the fins and tall cockpit being an issue there. Also I think only the Soviets were pushing the very high blade angle of attacks necessary for achieving the very high speeds attained by the Tu-95 and Tu-114. Correct me if I'm wrong.

taildragger said:
As I recall, the landing transition to vertical flight was a problem also. Even with perfect ergonomics, landings required a pullup maneuver that put the aircraft at a considerable altitude that required a long, fuel-consuming descent. I'd guess that the Pogo would have to descend fairly slowly to avoid putting it's highly loaded airscrew into the "swirl-mode" that's claimed at least one V-22.
Click to expand...

One advantage of the delta wing on the FY-1 was that it not only could reach a fairly high angle of attack, it generated a lot of drag as angle of attack increased. As a result, a zoom climb was not necessary to kill speed and bring it to a vertical attitude.

PLEASE stop putting Youtube links in URL tags. Simply paste the URL into the document and it will automatically be embedded in the post (Like above). 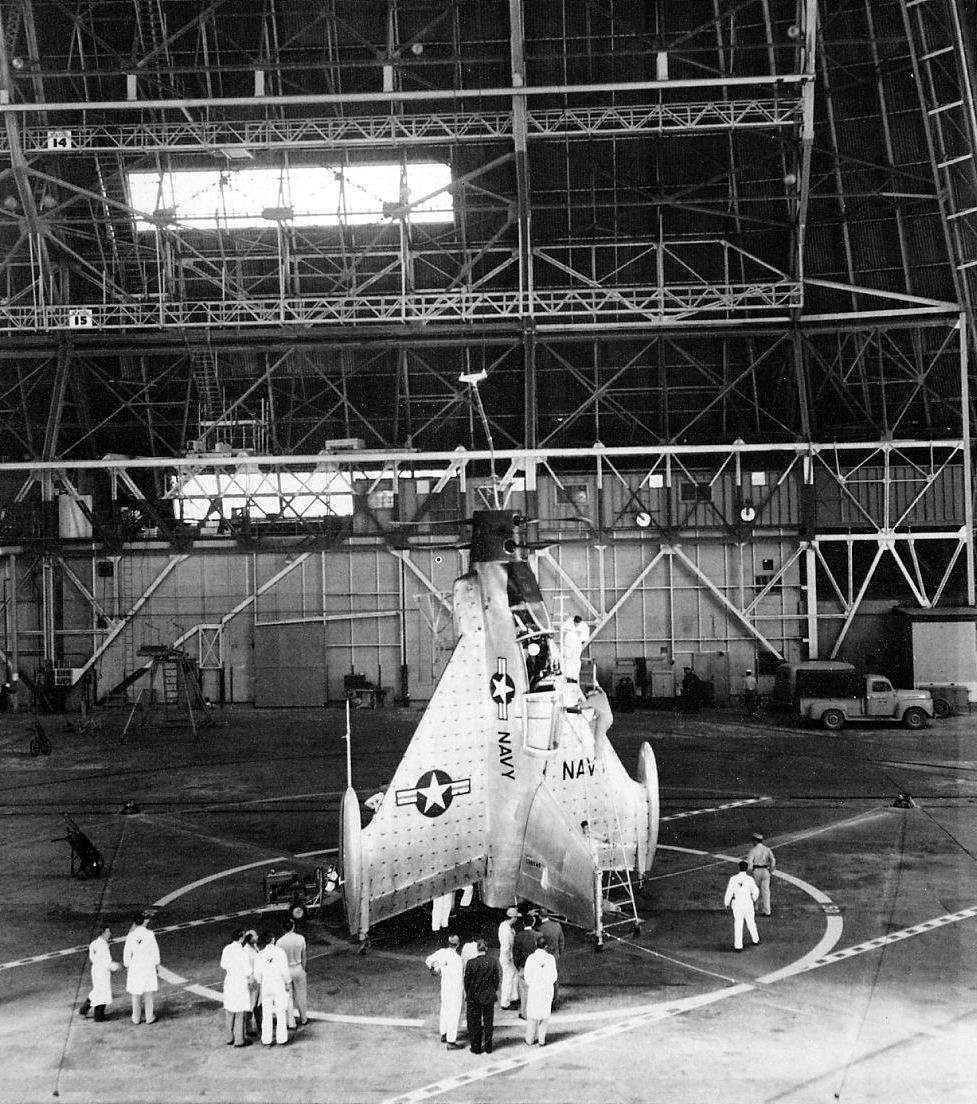 Learning to walk before you run. The Pogo getting ready for its indoors tests inside the humongous dirigible hangar at Moffett Field, California (June, 1954). The aircraft was suspended from a toug…