Western Artists' Concepts of Soviet aircraft during the Cold War

MiG-25: "introduced as two crew all-weather Mach 3 interceptor, but looking at its wing shape we guess it is a multi-role aircraft basically suited for low altitude nuclear retaliation. It is probably a Yakovlev product"

Spanish edition of an original english encyclopedia of weapons. Published in Spain in the early 80's.

This is my first post from it. An speculative drawing of a "new Soviet fighter in the F-16/F-18 class". "It seems that it comes from MiG and MiG29 designation is given, but others sources identify it as a Sukhoi product".

Nice pics Matej, thanks a lot
I have some stuff from the 50's that I'll look for. I remember a "Science Fiction" nuclear VTOL intercontinental bomber.

By the moment another profile from that encyclopedia of weapons. This time it is a "Su-27 Flanker".
Sorry for the bad quality scan :-\ but anyway I think it is a good looking aircraft

Even when they got the design bureau right, they still mis-identified aircraft. The Ye-2 "Faceplate" as the MiG-21, the Ye-152M "Flipper" as the MiG-23, etc.

Even when they got the design bureau right, they still mis-identified aircraft
Click to expand...

First evidence of a Soviet equivalent to the Fairchild A-10 came in 1978, via USAF recon photos of a prototype at the Soviet Air Force experimental centre at Ramenskoye.
The US first identified it as the Ram-J.
Some reports have used the designation ‘T-58’. The aircraft was assigned the NATO reporting name of Frogfoot.
Armament of one multi-barrel rotary cannon and up to ten hardpoints.
The powerplants are probably non-afterburning versions of the Tumanski R-13. These engines are located in the wing roots.
Deliveries of production aircraft are expected to begin in 1983 or 1984.

P.S. I have to apologise, as I am unable to match these photos together, as I’m not the sharpest tool in the shed when it comes to things like this with my computer.
Does someone want to have a go?

I think although they were right of the mark with this impression of what would become the Sukhoi Su-25 Frogfoot, it still is a very interesting and I think a very good-looking design!

Out of interest Elmayerle, What did this Su-19 advanced and unbuilt version look like ?
Do you have anything in the way of pics, drawings or specifications for it

I have specs and drawings of the Su-19 - it used a"crescent" wing similar to the original Su-27, had Tumansky turbofan engines and a lookdown shootdown radar/weapons system. I can post when I get home.
P

"Kamov Hokum" from domestic version of what originally was Encyclopedia of Aircrafts, Aerospace Publishing Ltd, 1991. Its interesting that western analysts long time thought that Ka-50 is two seat helicopter mainly because Soviets used during tests pasted plastic pieces behind cockpit for mirroring sunlight like glass.

Out of interest Elmayerle, What did this Su-19 advanced and unbuilt version look like Do you have anything in the way of pics, drawings or specifications for it
Click to expand...

You can find drawings and specifications in Red Stars, Volume 16, Sukhoi Interceptors.

Do you have anything in the way of pics, drawings or specifications for it
Click to expand...

Thanks Pometabl for putting my scan together.

Thats what I was going to do!
Well try to do.

Thanks again for your efforts

Thanks to you for posting the pic, I'm glad to collaborate with you

I don't know if we'll find much info on these types, but below is the General Dynamics MiG-2000. When we develop new fighters we use intel reports to tell us what they will be up against. The ATF (Now F-22) was developed to dominate the Flanker follow on, which turned out to be the MiG 1.42. As a result of American Intel, they expected it to be a twin engine canard delta configuration with some LO features. As a result, this is one of the concepts they came up with of what the ATF may have been up against. I think it's actually a very cool design, myself.

I knew about the MiG 2000 Conceptual fighter ( Stealth Technology. The art of black magic by J.Jones. TAB Books) but I didn't knew that came from GD. I'm fascinated with this design activity which is new for me. I thought that Aerospace companies designed only for its own nations or give assistance to friendly customers.
Recently, thanks to posts in whatifmodelers forum, I discovered that US Manufacturers also give help to Hollywood movies:

But this American intel/development of opposing designs is amazing. I'm waiting for more info

This is an hypotetical nuclear powered bomber

Crying under the table))) Thank you)))

Desinterpretation of what is this? Or pure fantasy?

pometablava said:
More from the "Weapons Encyclopedia". This time Chinese Fighters, the J-8 and the J-12. Both from Shenyang
"The J-8 Finback would be a Mach 2 fighter (2 Tumansky R-11 copies) developed from one MiG-23 received from Egypt. First operational units would be ready from 1980".
"The J-12 would be a Mach 2 fighter engined with one Spey with afterburner". The Chinese Spey program started in 1979.

Ohhhhh ... are there some more of these Chinese "might-look-like" ... and would You PLEASE be so kind to post them here !!!!!! PLEASE

Cheers + THANKs a lot, Deino

This is all I have about Chinese "might-look-like", but If you want high quality scans about this pics I can send you by email

This is all I have about Chinese "might-look-like", but If you want high quality scans about this pics I can send you by email
Click to expand...

Hey, that would be very fine !!

I have found that the Western Press Mig-29 misidentification I posted here it its not an pure invention of Western analists. It seems that this "westen MiG-29 is based on early designs of the real work

Deino's impression is based on the overhead satellite image. Top view is pretty accurate.

The later MiG-31 alias "Super-Foxbat", the MiG-29 and the Su-25 (similar to the colour frofile already shown) !

The Pentagon explicitly denied reports in Janes and other publications that the Soviet Union is developing/flight testing 3 new projects:

a Tu-144 derived bomber
MiG-29, an air superiority fighter with capabilities between the MiG-25 and F-15
An A-10 equivalent

And the MiG-29 pretty much came thru as well as the A-10 equivalent. There never was a Tu-144 derived bomber tho, was there? Was it a standard Tu-144 seen in the wrong place at the wrong time or the Sukhoi T-4 or what?

overscan said:
The Pentagon explicitly denied reports in Janes and other publications that the Soviet Union is developing/flight testing 3 new projects:

a Tu-144 derived bomber
MiG-29, an air superiority fighter with capabilities between the MiG-25 and F-15
An A-10 equivalent

The Tupolev Tu-160 original configuration was heavily based on the Tu-144. Tupolev also tried to push various cruise missile carrier, recce, ecm, even interceptor versions of the Tu-144 through the 70s.
J

It seems that in his presentation of the "Aviation week" Russian pseudo-Atomic plane, Matej used this page :
http://modelstories.free.fr/histokits/A-plane_P/page7.html
but he forgot to copy the other picture in that page which puts the whole affair in a totally different light. This is an editorial from the French magazine Aviation Magazine dated January 1st 1959 (hence the following week after Aviation Week article).
here is a rough translation :
" Fakes bringing gold :
we don't want to say the Russian A-plane does not exist. Our very own sources tell us that the Russian engineers put a big effort regarding this subject. But to swallow the super-bomber "discovered" by Aviation Week it needs a bold step.
We will therefore take this opportunity to reveal the politico-budgetary undertones of this question. Everyone will recall how , five years ago, Aviation Week did a big detailed article about the new Russian super-bombers Tu-200 and IL-38,(which never existed). This astonishing article was published just days before the Congress discussed the budget of the Strategic air Command which at the time was menaced by severe budget cuts. Thanks to this article and the said Soviet menace, the SAC budget became taboo.
Now , december 1958, aviation week reveals in exclusivity a Russian atomic bomber...
And we just have to reprint what our colleagues of "le Figaro" [a top political evening newspaper in France] said : by a remarkable coincidence , this affair happens when President Eisenhower has announced his will to reduce defense spendings and will today -december 2nd- review the military budgets in the National Security Council.... many interests are then to be discussed which would be served by the announcement of another "triumph" of the Soviets.
Mr Mac Elroy the Secretary of Defense is sceptical. He ought to be when seeing the drawing of the said A-plane which Aviation Week has largely distributed through many press agencies. The artist who drew it could at least have drawn a believable aircraft."

Now if Aviation Magazine did not believe in it , the model manufacturer Aurora did ! 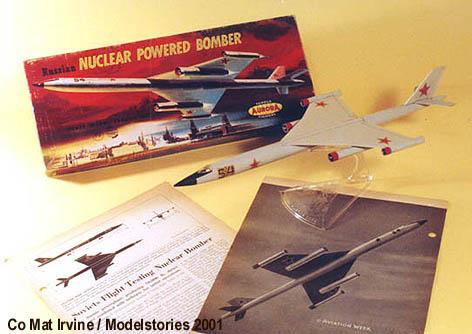 but whatever the model kit , this is very interesting in that it suggests the whole affair was not a question of misidentified "Bounder" but really a political scam using a fake aircraft to protect the "militaro-industrial complex" interests !!!

ISTR reading in an issue of The Bulletin of the Russian Aviation Research Group of Air Britain some years ago a listing of misidentified a/c. I think the most prominent one was the MiG "Fearless", which I think was a twin engined version of the MiG-23, or maybe a VG version of the MiG-25, supposedly. I don't know if "Fearless" turned out to be "Fencer" or what, but it went away. The fact it was given a NATO code name was a big deal. Also listed were altered photos, but not shown, a number of types. One that comes to mind is an altered photo of the CF-105 Arrow, supposed to be a MiG of some sort. There was also reported a USSR 'copy' of the F-4 Phantom II. I know there were others, but these are the ones that come to mind.
F

Was that the one that looked like Tu-144 wings & tail with hardly any fuselage? I always wondered if there was a Tu-144 bomber variant. In an old Wings or Airpower magazine there's a a small drawing of a Tu-144 with shorter aft fuselage & conventional nose / windshield claimed to be an early Tu-160 proposal, but I've never seen it elsewhere that made it seem 'official'. I believe the issue was from arund 1990. I saw some mention somewhere that RAM-H was the Tu-144D, so maybe that was the Tu-144 bomber they thought.

overscan said:
The Tupolev Tu-160 original configuration was heavily based on the Tu-144. Tupolev also tried to push various cruise missile carrier, recce, ecm, even interceptor versions of the Tu-144 through the 70s.
Click to expand...