Vought two-seat F-8 for the UK

The advantage would be that the Speyed Twosader would be operable in full combat load from Victorious and probably Hermes (post-1964-66 modernization), thus keeping 4 strike carriers in service with the RN (all 4 with Speysaders & Buccaneers).
A

...and also from Foch and Clemenceau. The spey would much shorter than old J57, the shorter rear fuselage would help at launch
from the carrier, making the variable incidence wing (and improved blown flaps done OTL by the French to help further) far less necessary.

The Crusader variable incidence wing really happened because the bulky J57 needed a very long aft fuselage. There was a very real risk that the rear fuselage would hit the deck when the Crusader took the angle of attack (AoA) it needed for liftoff. So instead they made a wing with a changeable AoA - a variable incidence wing.
And for the French it was even worse, as the Clemenceaus were barely the size of upgraded Essex carriers, not even mentionning the Midway and Forrestal and Kitty Hawk and Nimitz. We had to improve the blown flap system.
Now had the Crusader engine been replaced by a shorter one (J79, Spey, whatever) allowing the rear fuselage to be truncated, the issue would have vanished.
Last edited: Sep 1, 2019
U

I alway wonder why the RN didnt just go for a Buccaneer with SideWinder and Sparrow or even Phoenix. Again, sorry not an engineer.
It would have given the RN an F18 style capability in one airframe.

Well, not Phoenix because that requires AWG-9, which probably would not fit. And the Bucc as built (even the S.2) was solidly subsonic, with a fairly high wing loading, which was nice for limiting gust response at low level, less so for dogfighting.

There were a bunch of proposed supersonic Buccs, including at least one fighter, but they would be nowhere near competitive with later types like the Hornet.
N

I wonder if there was any thought in replacing the under nose intake with side intakes and expanding the nose for a larger radar?
A

Or just bring back the Crusader III, which intake was far back enough to allow for a radome large enough...

NUSNA_Moebius said:
I wonder if there was any thought in replacing the under nose intake with side intakes and expanding the nose for a larger radar?
Click to expand...

I've seen drawings of what is clearly an early concept of the Crusader with a radome in the nose and side intakes - it would have been a great looking airplane, sort of like an overgrown F11F Tiger.

Is it possible to show those drawings please?
A

I wish somebody could modify that stupendous Twosader color profile with a Spey exhaust and some of the other goodies planned for the RN bird...

Only by looking at this picture one can understand why the Crusader got his variable incidence wing. That rear fuselage is sooo loooong... as I mentionned in my earlier post, a shorter Spey would allow a drastic cut of the rear fuselage. Look at the picture author signature DEBARRE Michel: it corresponds to what would be cut thanks to the shorter Spey (up to the strakes).

So the J57 is 1/3 the length of the entire Twosader ! Which bring its length up to the "N" in NAVY on the rear fuselage. 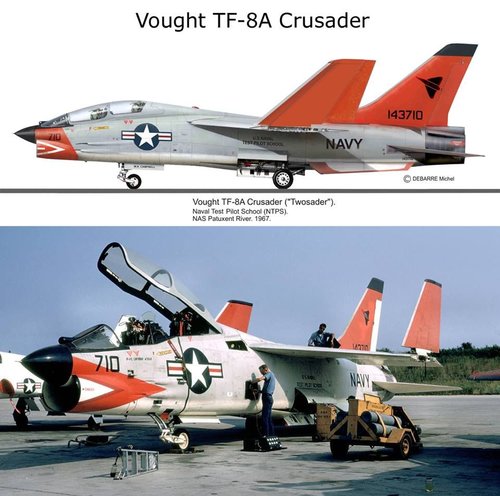 Foo Fighter said:
Is it possible to show those drawings please?
Click to expand...

I'll post them someday but they're unavailable to me now.

Thank you, Sir.
U

An Anglo French Crusader keeping the existing UK carriers in service does seem a nice what if, at least for the modellers and artists.

If it could have allowed the Dutch and Canadian navies to keep their carrier forces (perhaps with second hand Essex class ships), NATO would have had a pretty formidable set of carriers to support the big US ships in the 70s and 80s. Though perhaps ASW carriers might have been more useful, but that is a whole new thread

The Dutch carrier Karel Doorman had a flight of Sea Furies, then a flight of Sea Hawks in the early fifties. It reverted to a strict ASW role later on. I don't think there ever was a chance of the Dutch navy acquiring a strike carrier.
You must log in or register to reply here.
Share:
Facebook Twitter Reddit Pinterest Tumblr WhatsApp Email Link
Top