I was flicking through some of my old magazine extracts that I have collected over the years (a photocopy when photo copiers were as amazing as computers are today!). I came across an article about the Vought IF-8 Crusader.
It was apparently a proposal of based on the Vought F-8D Crusader to the Luftwaffe for a supersonic fighter, at the time that the Luftwaffe was assessing the English Electric Lightning, Mirage III, J35 Draken, XF11F-2 Super Tiger and the F-104 Starfighter to replace its Sabres and F-84’s.
The IF-8 Crusader was to have had a General Electric J79-GE-17 Turbojet, in place of the normal Pratt & Whitney J57 turbojet; increased internal fuel capacity, and a so-called USAF cockpit and modified offensive weapons.
As history has shown, Germany chose the Lockheed F-104G Starfighter.

Does anyone know anything about the Vought IF-8 Crusader?
Or was this just the V-1000? ???

V-1000 is from 1969. The German (and Italian) program was from the start of the '60s. This project is intriguing. It seems it never received a V-number. Don't know if the V8-U2 (later F-8D) airframe could receive a J-79 without major modifications. Idea, what if it was the F8-U3 reborn? It was offered to the USAF with a specific version (don't remember the V-) and the engine was the J-75...
E

J79 as a replacement for the J57 is reasonable, the thrust is the same and the overall engine envelope is a bit less. That would make sense in a lot of ways. *grin* That the chief engineer behind the J79 was an Americanized German (by way of the AVG, no less) would not have hurt. Using the J75 would've required the larger airframe of the F8U-3 since the J75 was essentially an enlarged J57.
A

The Crusader is well known for its brilliant performances over Vietnam. At a time, it was the only valuable fighter in the american arsenal (the Phantom has its difficulties, the F-104 was a turkey. what else ?)

Now, this was achieved with the old and heavy J-57 engine...

This plane would have been ideal for the Essex carriers, which were too small for Phantoms (I mean, J-79 powered variants. Americanised spey Phantoms were proposed for use on... small carriers. See what I mean ? )

I red that in Vietnam air protection of smaller carrier was assumed by Skyhawks with AIM-9 ???

I thought, too that the V-1000 was a proposal from the late 50's. Hmmm there's a cool alternate world to imagine, in which Vought sell the Crusader III to USAF, the
IF-8 and V-1000 are produced until 1972 for USN and Foreign customers (including navies of countries such as Brazil, France, GB...).
Last edited: Sep 30, 2019

Fascinating concept. I know that XF-108 Rapier interceptor and the XB-70 Valkyrie bomber were going to have escape capsules. I've read somewhere that one of the V-bombers (the Victor IIRC) were supposed to have an escape capsule to the whole crew; rather than just having ejection seats only for the pilots, forcing the rest of the crew to parachute; with the risks involved.
F

Hammer Birchgrove said:
Fascinating concept. I know that XF-108 Rapier interceptor and the XB-70 Valkyrie bomber were going to have escape capsules. I've read somewhere that one of the V-bombers (the Victor IIRC) were supposed to have an escape capsule to the whole crew; rather than just having ejection seats only for the pilots, forcing the rest of the crew to parachute; with the risks involved.
Click to expand...

The B-58 also used capsules.

I look at the F-8 capsule with the fins and can only think the pilot can steer it to the point of impact. Ouch.

The prototype B-1s had capsules but the B-1B is ejection seat equipped. The XB-70 also had individual capsules - part of the reason that Major Cross was killed after the F-104 collision as the ejection seat could not retract back into the capsule to allow the start of the ejection sequence do to G forces that had built up.

One has got to wonder if you eject that much of the aircraft off in an emergency (especially in combat) what if it were itself heavily damaged by enemy fire before ejecting? Wouldn't also the forward section now be an easy target for AAA, SAM's, and enemy fighters? It just screams, "Shoot me".

What did you do to the image, Scott? Which tool did you use in Adobe Photoshop?

Thanks so much for manipulating the image.

Triton said:
Which tool did you use in Adobe Photoshop?
Click to expand...


Photoshop? Pfff. That's for rich 1% capitalist dogs who can afford thousand-dollar programs. I used Paint Shop Pro, which costs like $90. It has a "perspective correction," which starts off as a simple rectangle overlaid over the image. Simply pull the corners of the rectangle to the corners of the skewed rectangle on the image, hit the button and SHAZAM, it pulls it out into a right rectangle. The aspect ratio might be wrong, though.

Ha ha. I use exactly the same software to do the very same thing. Though I must admit I don't go as technical as this about it.

Do not bid on this item please, a forum member is bidding already.

Thank you very much for the information, Scott. B) I need to get a copy of Paint Shop Pro or learn GIMP.

I stumbled across this while doing an image search on "B-58 ejection capsule brochure" The site listed was "combatreform.org" but I had trouble looking at the site.

I never saw like this before,F-8 Canard and addition features;

NASA selected a Vought F-8A Crusader as the testbed aircraft (designated TF-8A) to install an experimental Supercritical Wing (SCW) in place of the conventional wing. The unique design of the SCW reduces the effect of shock waves on the upper surface near Mach 1, which in turn reduces drag.

Dr.Whitcomb's great work.
Modified fuselage shape is impressive. Is it applied area rule?
When I was a child, I imagine almost sama shape. Leading edge was more pointed like B-2 fuselage.
Perhaps you think "he is a liar", but honestly speaking, it's true.

The FBW Crusader got his own entry in NASA history series - Computers take flight.

Reading that document is fascinating because it sets the record clear on where did the CF-105 Arrow (1958) exactly stood in the history of FBW.
Basically it was analog FBW 11 years before Concorde (1969) 16 years before F-16 (1974) and 20 years to the day before the Mirage 2000. Quite a notable feat of engineering.

The real deal however was digital FBW. and there the story is equally interesting. Basically NASA Dryden wanted to build yet another analog FBW, but the Air Force was doing the same with a Phantom. The Dryden team went to NASA HQ, and guess who was Associate Administrator for Aeronautics ? Neil Armstrong himself. When they told him they wanted to build an analog FBW, he told them digital would be far better. And he added he had already flown a digital FBW vehicle: the Lunar Module. He proposed the Dryden team to procure one of the LM computers, and they bolted that on a Crusader.
Which mean that Neil Armstrong (and Apollo) made the ultimate "NASA spinoff" to aeronautics: digital FBW, found from the F/A-18 to the Shuttle, A320, Rafale, NH-90 chopper, B-2, and so many others.

Are there any more information about this?

My first thought is that the intake is going to have some severe distortion due to the sharpness of the bends to get to the forward face of the engine.

emile1211 said:
Are there any more information about this?
Click to expand... 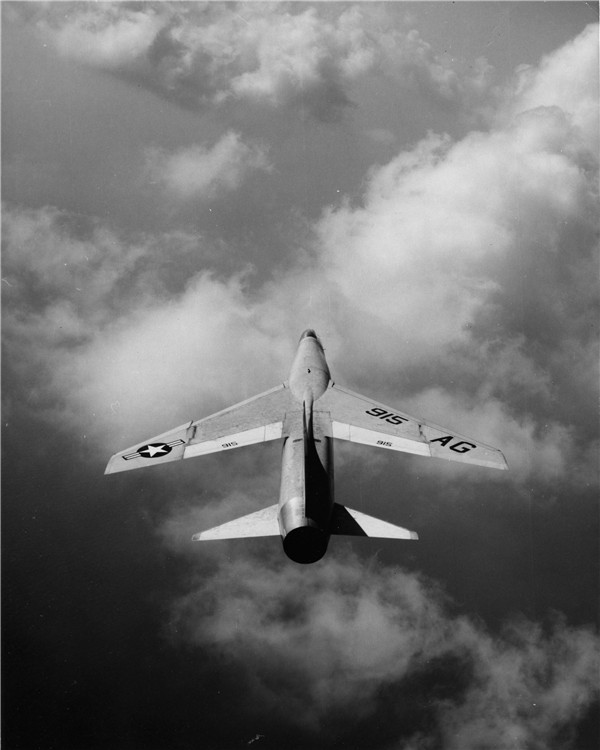 Astonishingly unusual photo angle for this unadulterated early recon Crusader of the VFP-62. Neither fins nor engine nozzle air intakes.