Good question. By the time the SR177 would have been operational, the FAA would have had Scimitars and Sea Vixens in service, and the SR177 is not an obvious replacement for either. Of course, they might have thought to have half a dozen or so fighters per carrier, purely as point defence against the dreaded high flying nuclear bomber. Given the specialist infrastructure that would have been needed to operate the rocket engine, it is questionable whether all that would be worth it just for a handful of planes.
B

Abraham Gubler said:
HMS Eagle was being refitted at that time to cary the fuel tanks needed for the Hydrogen Peroxide fuel for the rocket motor.
Click to expand...

That is incorrect; Eagle's modernisation did not start until 1959- no work was done on her to actually install HTP tanks. In preparation for that modernisation, prior to the cancellation of the SR.177, considerable work was undertaken to develop HTP tanks, plumbing, protective suits for crew and associated procedures as well as drawings being produced to install the required equipment in Eagle. However, no such installation work ever occurred.

The SR.177 would have been a replacement for the abysmal Scimitar in the day-fighter role, the air wing considered for Eagle in 1956/7 consisted of 12 x Buccaneer, 10 x Sea Vixen, 12 x SR.177, 14 x Gannet ASW and 2 x SAR helicopters, the cancellation of the SR.177 resulted in the fast-jet element of UK carriers being consolidated on the Sea vixen and the Buccaneer. In terms of use, the SR.177 would probably have been used in the same way as the Scimitar was- under GCI (SCI if you will) from the carrier using it's own Type 984 radar and radar feeds sent from escorting destroyers by datalink coordinated through the ADA system.
M

I thought the Bucc replaced Scimitar being as the Scimitar ended up as a strike platform as it could do nothing much apart from leak?

SR177 as an adjunct to Vixen is interesting. Imagine it would have entered service in what 1962 to 1964? Now let's imagine that CVA01 is still progressed with, would we see around 1974 a mixed bag of Phantoms and SR177 as fighter element? I'm guessing in a similar ratio to your earlier indication of 12 and 12 approx? It does make the order for 150 then start to look profligate! (Oh and 50 aircraft? Didn't the Ark only operate around 40 at most? Last commission was 12 Phantom, 14 Bucc, 6 Sea king, 2 Wessex, half dozen Gannets? Although yes Phantom is a big beast. On another tangent was VG/solid nose Lightning INSTEAD of Phantom or ancillary to it? (As in could it have been the affordable ish fighter solution to replace Sea Vixen) Always thought that they missed out on developing that amazing crazy beast further!
R

Charlesferdinand said:
I never realised that the SR177 was a navy project. Launching hydrogen peroxide powered fighters as routine operation would certainly have made life on board a bit more interesting.
Click to expand...

Particularly when one considers that RN had abandoned HTP as a torpedo propellant because of the dangers associated with operating it in a maritime environment after the 1955 accident on HMS Sidon.

MrT said:
I thought the Bucc replaced Scimitar being as the Scimitar ended up as a strike platform as it could do nothing much apart from leak?
Click to expand...

As far as I understand it, the FAA found that its fighter needs were pretty well covered with the Sea Vixen, but they still needed a fast low level strike aircraft. Supermarine had a long line of 'promising' high performance prototypes, so one of those was pressed into service in the strike role. Perhaps there was also some political prodding to finally order something from Supermarine, after the poor runs of the Attacker and Swift.

The Scimitar was of course designed as a day fighter, but my understanding was that what got it in production was that it could fulfill the Navy's need for high speed low level nuclear strike. My feeling has always been that that aspect was tacked on later, to ensure a production order for what remained essentially an air superiority fighter. And I must admit that I don't know what exactly N113 specified.

Returning to the SR177, I suppose this must have required large-ish tanks of hydrogen peroxide in the carrier. That certainly must have been a hazard in combat operations.
M

I know that SR177 was intrinsically designed to operate with the HTP rocket engine. BUT surely with a bigger engine, possibly with a mk2 version and a spot of reheat added, would that not have spelt the end of the rocket engine, while retaining the basic aircraft design? Finally regarding refuelling of the aircraft. Same men involved or specialists?

Might be worth merging this with the existing thread on SR.177 -- a lot of questions/comments here are already addressed there:

Charlesferdinand said:
I never realised that the SR177 was a navy project.
Click to expand...

Both RAF and RN versions were intended.

MrT said:
I know that SR177 was intrinsically designed to operate with the HTP rocket engine. BUT surely with a bigger engine, possibly with a mk2 version and a spot of reheat added, would that not have spelt the end of the rocket engine, while retaining the basic aircraft design? Finally regarding refuelling of the aircraft. Same men involved or specialists?
Click to expand...

The attraction of the rocket is with its performance at altitude. As aircraft fly higher the thrust from the engines decreases markedly. Since drag does the same, it doesn't slow you down.

What a rocket does for you is that it maintains sea level thrust throughout the flight envelope, including those high altitudes. So, if you don't need the extra thrust for very long, it's a lighter, more efficient way to get a big boost.

For example (using made up numbers because I don't remember the actual figures), say you have an engine that produces 10,000 lbs. thrust at sl, but decreases to 1,000 at altitude (I think it's even more extreme than that). A 1,000 lb thrust rocket produces that at any altitude. So while at sl the rocket doesn't do that much for you ( 10%), fire it at altitude and you've doubled your available thrust. To do that conventionally, you'd have to lug around an entire 2nd engine, with all the consequent penalties, you'd only use for a brief period of time.

The rocket concept, though, really only makes sense for pure quick interception missions, because of the limited time available for the boost. If your aircraft is going to need the extra thrust for a good portion of the mission and at lower altitude, then you either need a g=bigger conventional engine, or more of them. That's why, although it was examined for the F8U III, F-15 and F-20, nothing ever came of it because its benefit for a niche profile wasn't enough to overcome the penalties of a dual propulsion concept.

Thanks Hobbes for the great photos.

Cool stuff but of course totally imaginary, therefore misleading in this section of the forum, I think...

Random question, all: has there ever been any suggestion of what name may have been given to the SR.177 if it had entered service?
C

No. At time of cancellation, it was 12 to 18 months until the first flight.

Thank you, that makes sense.

ZacYates said:
Random question, all: has there ever been any suggestion of what name may have been given to the SR.177 if it had entered service?
Click to expand...

I always thought "Sea Lord" could make some sense with the contemporary SARO naming of aircraft after titles (Princess, Duchess, etc). Though I'm sure something more aggressive and more exportable (outside of the RN) would be more likely to be chosen. Totally fictional but "SARO Seeker" sounds cool and could be inline with SAROs Squirt, Skeeter and Scout.

I delayed my flight from the UK to be on the last Boeing 747 (BA) flight into Phoenix so had time to kill. We decided to visit the Solent Sky Museum https://www.solentsky.org/ in Southampton. There is a big aviation history in south central England including Vickers Supermarine and Saunders Roe. 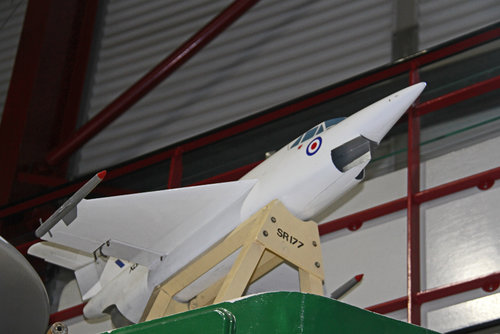 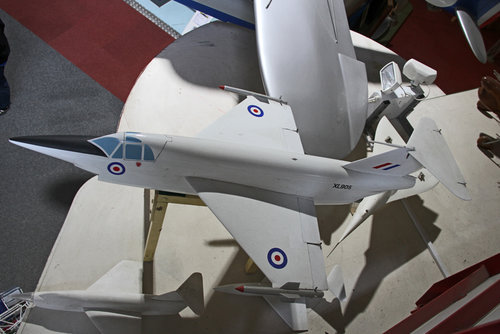 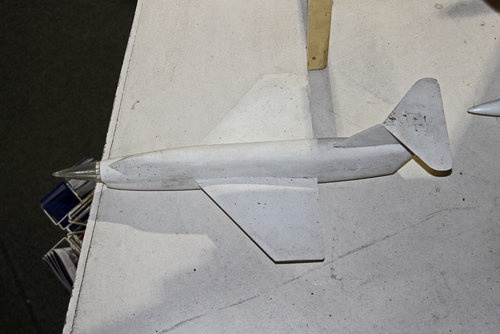 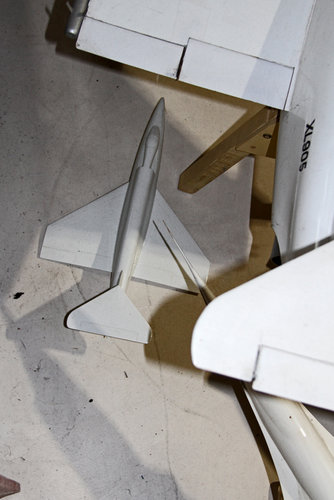 Note that the small models are a different configuration to the large model which seems to represent the generally acknowleged design. The first one has a different aft fuselage, while the second has a dorsal inlet. Photographing was difficult since they were located on top of a high cabinet and the other access was from a balcony.

Lower model appears closer to the SR53 than the 177... the nose intake on the 177 model also appears to have a different splitter arrangement to the half cone on the final design...

Yeah I have some drawings of early SR.177 which are very close to SR.53 - it basically evolved over several iterations. Great photos - I'm considering how many days I can take off from my holiday in January for avation research without causing divorce 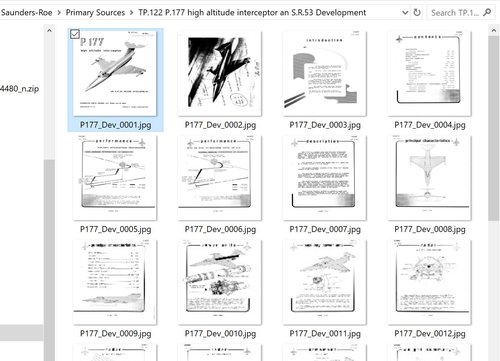 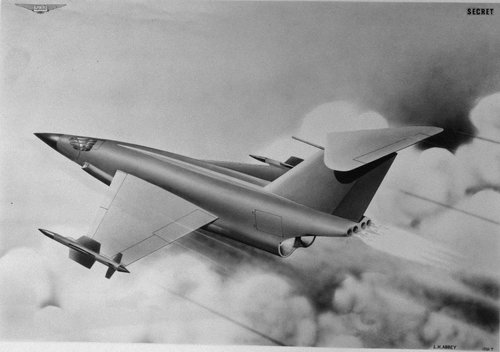 BillRo said:
Note that the small models are a different configuration to the large model which seems to represent the generally acknowleged design. The first one has a different aft fuselage, while the second has a dorsal inlet. Photographing was difficult since they were located on top of a high cabinet and the other access was from a balcony.
Click to expand... 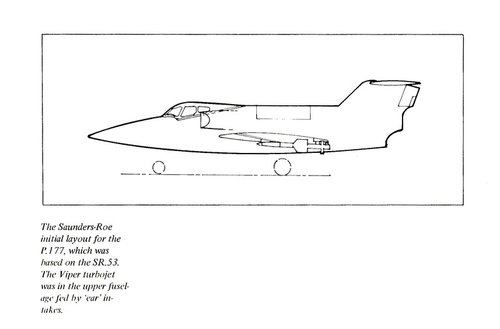 It was very kind of you to post some images taken from my website. What a shame you didn't acknowledge the source.

Sorry about it.
Please delete if it's not proper.

Taken at the De havilland Aviation Heritage Museum, suspended near a Gyron engine adjacent to the gift shop.

Thanks a lot. Beautiful model.
I can see various air intake shapes. Which is the final shape?

That inlet is interesting and possibly a source of problems considering how short the duct is to the face of the engine.
H

I've never seen the second inlet shape before. The original intake had a movable lip which had to be in the forward position to allow the nose gear to deploy, IIRC. The second shape would remove that requirement. But that inlet makes me wonder.....

It that just the model lacking the inlet component and this is just how it attaches to the model?

Or is that a genuine 2d wedge type as on F107, XB70 etc....?
Because if so, it surely storing up trouble considering the duct shape and it's shortness to the engine face.

A different view of the mockup previously shown: 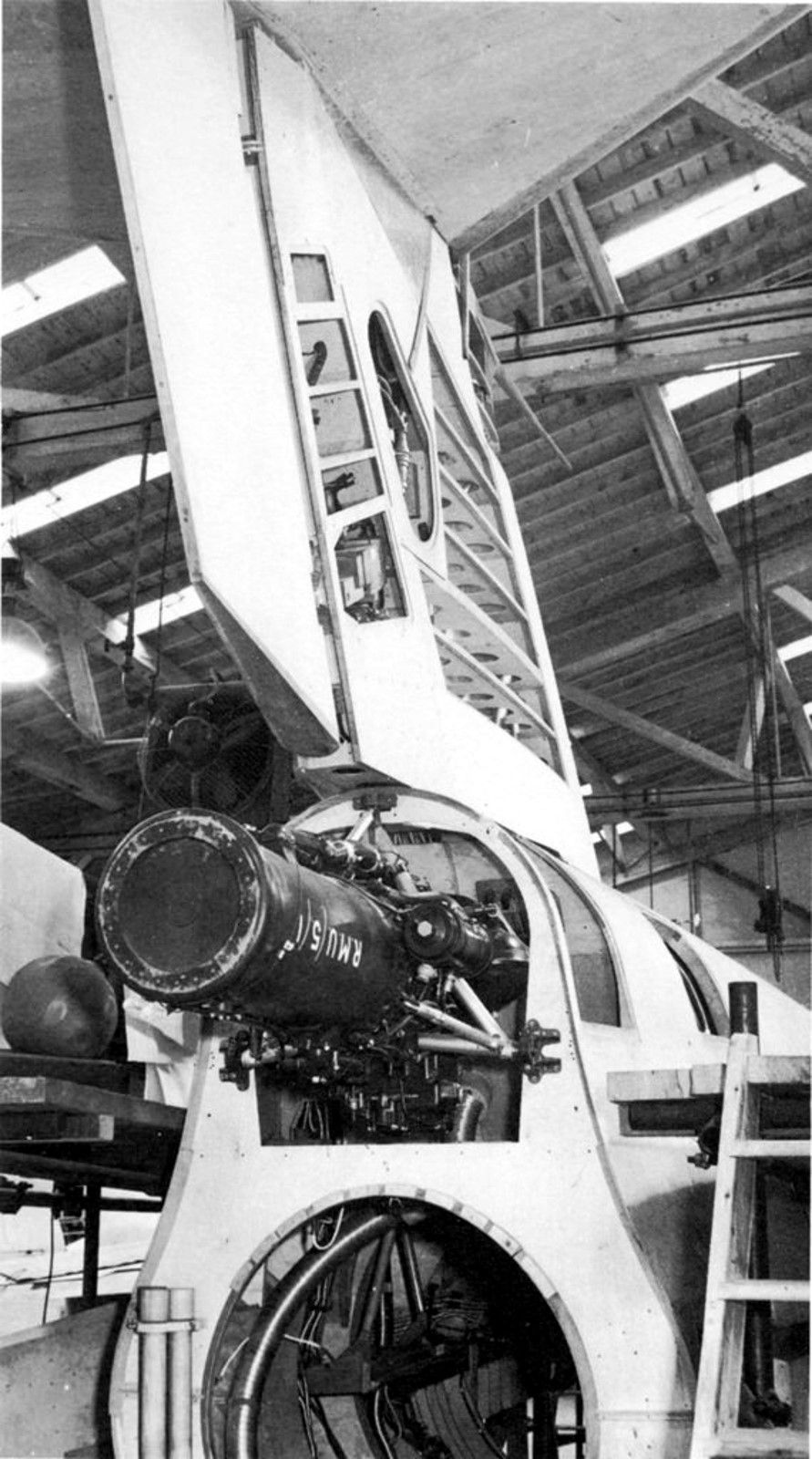 Some of the earlier posts speculated that the SR 177 would possibly have been able to operate from a modernised Colossus or Majestic light fleet carrier. If this was the case then the type continuing development through to deployment may have changed the opinion that the light fleet carriers would need to be replaced as they were too small for the incoming designs, i.e. Sea Vixen and Scimitar. SR 177 could have been a very interesting alternative allowing said ships to potentially serve into the 80s.
Share:
Facebook Twitter Reddit Pinterest Tumblr WhatsApp Email Share Link