on Ron Cobb work on "Real Genius" http://roncobb.net/15-Real_Genius.html
About the movie https://en.wikipedia.org/wiki/Real_Genius

On Laser Fusion (ICF) it became allot quiet these days
the Lawrence Livermore National Laboratory has the Big one in operation
France has the Laser Mégajoule (LMJ) research device near Bordeaux, (still under construction ?)
I wonder if Chinese have also a large ICF installation
A

This explain the why of Val Kilmer being a fatty nowadays. He probably ate all this popcorn by himself

The frozen xenon laser shown in the movie was based on a *theoretical* concept that one of the tech advisors believe at the time might work. The physics might still hold, but if it works, it either hasn't been demonstrated, or was kept quiet for one reason or another.

Conclusions
Very large gain coefficients are to be expected in solids in contrast with the gas phase, due mainly to their high packingdensities[ 51. While the 4 ‘r emission can be efficiently stimulated in solid xenon and a large gain coefficient can be verified, these amorphous solids are not very useful as amplifier media because of the scattering losses that predomi- nate. Large rare gas polycrystals of excellent optical quality have previously been prepared for VUV laser applications [ 61. Such crystals could in principle be prepared with interstitial halogen dopants and exploited as laser media - a promotion of solid state rare gas halide exciplex lasers from the realm of sci- ence fiction [ 71 to that of science fact. In gas phase media, bound to repulsive type transitions are ide- ally suited as lasers. In solids, if the excess kinetic energy cannot be accommodated in the immediate trap site, permanent destruction of the lattice results and leads to highly scattering lossy media. This con- sideration is of little concern in the case of liquid phase exciplexes discussed in the following Letter [ 41.

Despite the poor performance of these amorphous solids as gain media, emission can be effectively stimulated. This process then provides an effective means for the generation of hot, almost monoener- getic atoms in condensed media and therefore is use- ful for molecular dynamical studies related to energy transfer, diffusion and photomobility. A theoretical, molecular dynamics, study of CIZ photodissociation in rare gas solids was recently reported [ 8 1. Stimu-lated radiative dissociation should be an ideal scheme for preparing the fast atoms to test the different, pre- dicted modes of energy accommodation.

Archibald said:
This explain the why of Val Kilmer being a fatty nowadays. He probably ate all this popcorn by himself
Click to expand...

He is much thinner after his throat cancer treatment. (probable the reason why he became so overweight)

back to Laser
I look on current status on ICF aka Laser Fusion in Google:

i only found this science document that is 6 years old
https://yadda.icm.edu.pl/baztech/element/bwmeta1.element.baztech-article-BPG8-0096-0035/c/httpbpasts_czasopisma_pan_plimagesdatabpastswydaniano4december201207lasernuclearfusion.pdf

This 2016 article say that that Lawrence Livermore National Laboratory not reach there Goals in 2012
and it could take to 2026 to have Results (were do i hear that before ? ahh yes about Tokamak reactors...)
http://www.sciencemag.org/news/2016/06/giant-us-fusion-laser-might-never-achieve-goal-report-concludes

This 2017 Blog Article give excellent over view on US Fusion research and ICF Polywell and Others Experiments in progress
also look on Fusion rocket engine and there allot Links to the subject
http://www.thepolywellblog.com/2017/11/the-current-state-of-us-fusion.html
A

thank you all. A non-fission-trigger H-bomb is an intriguing idea. It would solve Orion fallout issue.

Archibald said:
thank you all. A non-fission-trigger H-bomb is an intriguing idea. It would solve Orion fallout issue.
Click to expand...

There have been a number of proposed means of setting off a meaningful hydrogen fusion explosion. My favorite is to simply hit the deuterium target hard. *Real* hard. A steel hammer smacking a properly shaped steel anvil, with frozen deuterium in the way, can theoretically set the fusion process going, which can then transfer to a potentially arbitrarily large mass of fusion fuel. The speed the hammer has to go is fairly impressive, though... generally achievable via a coilgun *miles* long. Martin & Bond used such a system for their world ship concepts; in this case a miles-long accelerator was just fine because the ships were *hundreds* of miles long. And each pulse unit had a yield measured, IIRC, in thousands of gigatons.

But things here are little bit different here !
There Universe has additional sets of fundamental forces, represented by a five Dimensional law of Physic.
If you think it's easy to simply change Physic law for your Story Univers by "Hand Waving"
Forget It
This here is complex set of Physical laws in order to make it work...

I'll link Winterberg most recent (and interesting) papers. The bottom line seems to be "Orion was killed by fallout. Fallout from the A-bomb trigger in the H-bombs. If only we could replace the A-bomb trigger by a TNT trigger, then no fallout, and Orion could be back". Unfortunately chemical explosives can't do the trick - at least, not alone. Some kind of "intermediate trigger system" is needed for TNT to light a H-bomb.
Then Winterberg seems to have all kind of ideas to bridge the TNT / H-bomb "trigger gap". He seems to be pretty self-obsessed with the idea. As Scott said above, there are indeed many ways to start fusion without a fission trigger. Winterberg seems to explore a whole bunch of such ideas.

The usual issue, of course, is what works with current technology, or not.

Plus the pandora box of H-bombs without a fission-trigger. 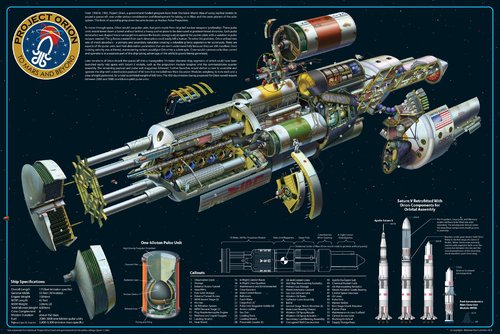 Nice find galot, that is the first time that I have seen the internal workings of Project Orion, is there any information available about the type of reactor that would be used to power Project Orion?

The propulsion was was just atom bombs, as to how the hotel load was to be powered, Someone, I think it was OBB once mentioned that it was not examined in detail, that it was considered to be another departments problem. The main thrust (ha!) of the program was not blowing up the ship with the bombs. I think that it would have been a challenge to design the power plant due to the tumbling pigeon design screwing with the circulation of coollant and working fluid.

Nothing that I or anyone has ever come across has detailed the onboard power requirements beyond "it'll probably have a reactor." The Orion propulsion module itself did not require a whole lot of power, much like how a machine gun or a paintball gun doesn't need much power to operate; the bulk of the power requirement would doubtless have been the payload. So onboard reactors would most likely have been integrated into *that*.

This may be a daft question (do excuse me, nuclear physics isn't m'forte....) but how were they proposing to stop the force of the detonation going through the hole in the pusher plate? If it was, as it appears to be, aimed at the plate, surely something would've been needed..? Or am I not interpreting Galgot's excellent find correctly?

shedofdread said:
This may be a daft question (do excuse me, nuclear physics isn't m'forte....) but how were they proposing to stop the force of the detonation going through the hole in the pusher plate? If it was, as it appears to be, aimed at the plate, surely something would've been needed..? Or am I not interpreting Galgot's excellent find correctly?
Click to expand...

Some of the blast *would* proceed through the Central Firing Tube. This was a rigid cylinder in the middle of the Pusher Plate, firmly fixed to the Intermediate Platform. The Pusher Plate would slide back and forth on the Central Firing Tube, using it as a centering guide. The tube would have lines within it containing silicone oil; some would be released to serve as lubricant for the Pusher Plate; some would be sprayed out in "puffs" before each blast, the puff of oil coating the plate and providing ablation protection.

A small fraction of the blast would go straight through the tube. After going through the tube, the jet of plasma would first strike the muzzle of the Gas Gun. To protect the Gas Gun from having superheated tungsten shot up the bore, it was protected by a conical Plasma Deflector. This was a cone of steel armor that would split apart into four segments to allow the Pulse Units to pass through, then snap closed to cover the bore. This would prevent plasma from getting into the muzzle. The Plasma Deflector Cone would take a Mighty Thwack from the plasma jet; this would be passed forward through the deflectors structure to a gas torus-based shock absorber that would connect directly to the structure of the Propulsion Module. The aft face of the Propulsion Module itself was conical so that the plasma diverted by the Plasma Deflector would either miss the aft face of the PM or give it at worst a glancing blow.

Detailed General Atomic diagrams for all this are in issue V1N5 of Aerospace Projects Review.
N