I'm currently drawing a profile of something called "Cymballine". It vaguely resembles this:

But has intakes with half-cone centre bodies right forward under a nose which is, well... shaped like a yacht. It's clearly supposed to go very fast, but all I have is the outline drawing I'm using as a reference (and I don't know where I got that from). Any information?

Uhm, why didn't you just post the outline rather than a different plane than the one you want identified? ???

... because I didn't have a copy on my intarweb site yet, and frankly, how many projects are there called Cymballine? (This may be spelt wrongly?) 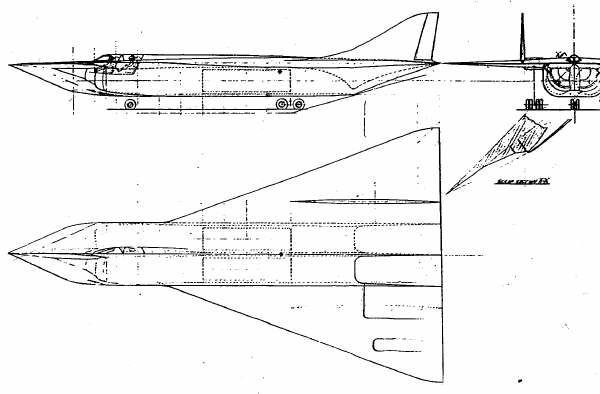 The Cymbeline name was applied to the EE P.42 solely for the introduction to the article in Air Pictorial. Cymbeline was the king of the Britons in the Shakespeare play of the same name. There may have been an RAE project called Cymbeline, based on the RAE penchant for Shakespearean character names for its test vehicles, qv Falstaff, Ariel, etc.

how many projects are there called Cymballine?
Click to expand...

So the answer would be "quite a lot", by the sounds of it!

Wiat, is Chris Gibson here ?
I've red the article "the highest hurdle" some years ago, excellent job!
Heck, "this is rocket science" website is the only place in the web with valuable data on the english electric P.42... ;D

The BSP4 cover was selected by the crew of the drilling rig Ensco 80 from four possible sketches. The winning sketch was called "Cymbeline", but when it was painted by Tim O'Brien and used for the cover, it was renamed "Bright Promise" as that description summed up the whole enterprise.

RP1 said:
... because I didn't have a copy on my intarweb site yet, and frankly, how many projects are there called Cymballine? (This may be spelt wrongly?)

according to part one of Chris Gibson's article in Air Pictorial,April 1999, page 240, what you have is the EAG 3281/2 design, there was a smaller, single engined, related design as well, the EAG 3377/2, hope this helps

The BSP5 volume about British hypersonic and space shuttle designs should include newly published images regarding Project Cymballine.