Me 262 - Projects, Pre-Projects And Variants

what do you think about those drawing? 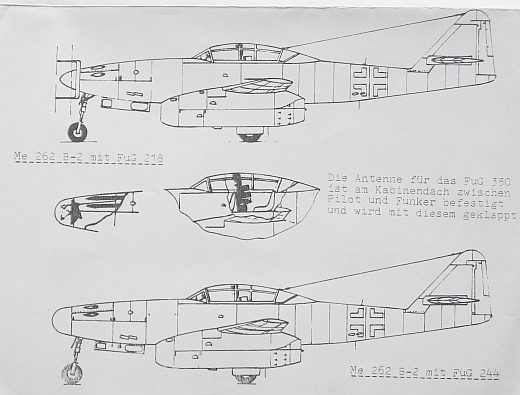 sgeorges4 said:
So this was a real B2a concept?!
Click to expand...

If your question is about the single-seat Me 262 with radar antennae: there was one such aircraft, but it seems it was a testbed with the radar array on its nose used mainly for aerodynamic testing.
https://www.secretprojects.co.uk/forum/index.php/topic,6994.msg256955.html#msg256955
S

My question was for the lenghtned monoplace with radar equipment. 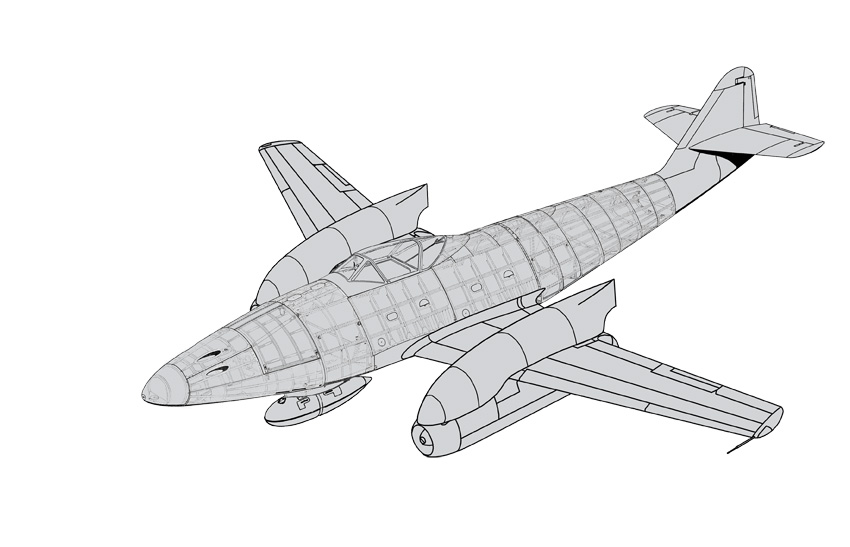 Also note the position of the under-fuselage tanks. The top image shows the tanks' tails reach as far back as the wing root, where the long fuselage drawing shows the same tanks well clear of the wing root.
S

Well for me,it's a long fuselage: 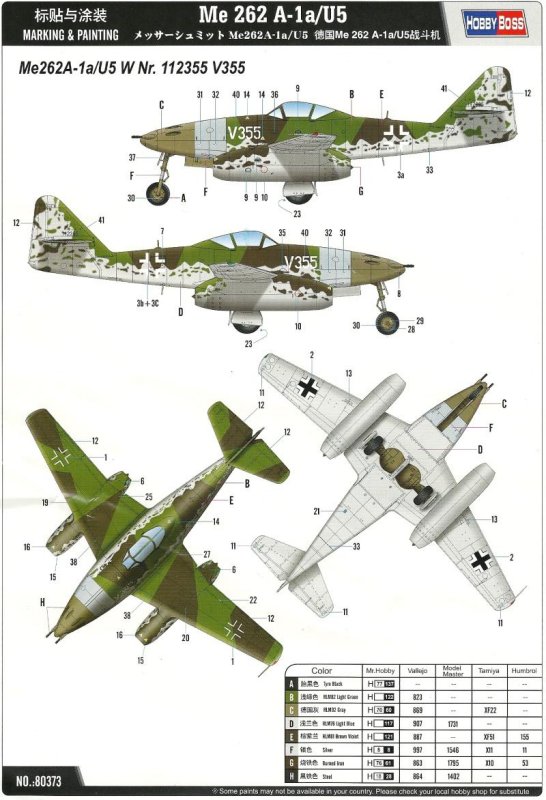 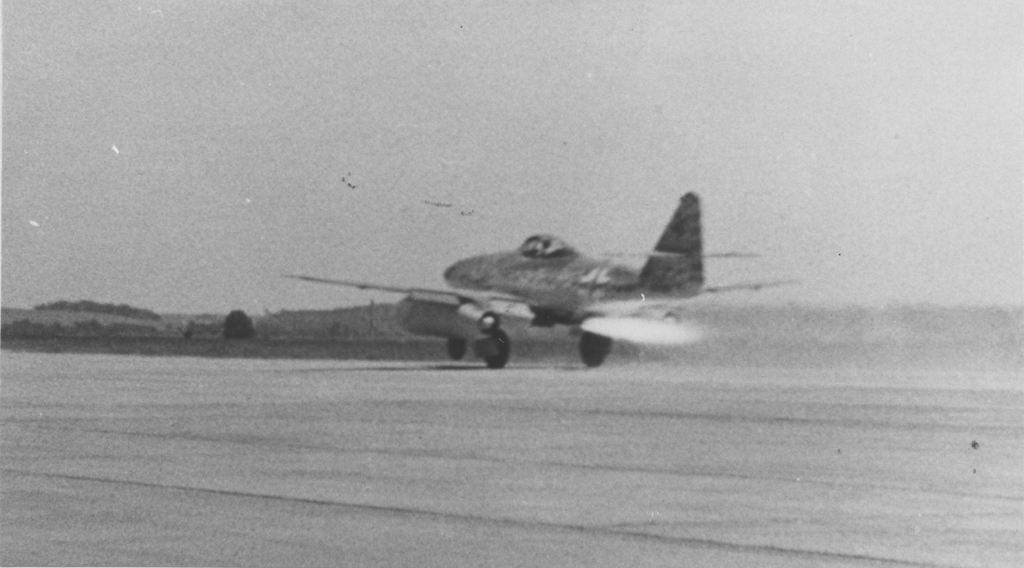 sgeorges4 said:
why original nose is dashed for the project under the first one?
Click to expand...

Probably to show, how much the nose was lengthened compared to the standard.


sgeorges4 said:
... and can anyone give a larger picture of those project(I have some problem for reading what's write on them)?
Click to expand...

.. and another good reason to mention the source (but I just asked once or twice ...) ! :
It's much easier, if you don't have to browse through several books. I was lucky, Hugh Morgans "Me 262 Sturmvogel/Schwalbe"
was the second one.
What's a bit strange is, that those drawings are on paper with the logo of the Deutsche Lufthansa. Perhaps paper with
the Messerschmitt logo was sold out ? Or the Lufthansa staff used his spare time to put some ideas on paper ?

Thanks! Just want to know If those Mohr drawing are based on something real or not.
Thanks for your answer!
And for the lufthansa logo,It's seem that the first example where suppose to be create in the Berlin-
Staaken workshops of Deutsche Lufthansa from what I can understand in this book: 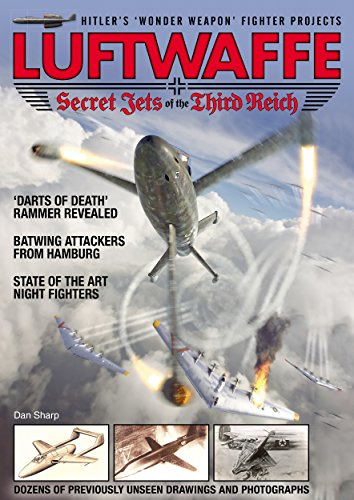 sgeorges4 said:
Thanks! Just want to know If those Mohr drawing are based on something real or not.
Thanks for your answer!
And for the lufthansa logo,It's seem that the first example where suppose to be create in the Berlin-
Staaken workshops of Deutsche Lufthansa from what I can understand in this book:
Click to expand...

Just want to know if a all weather or nightfighter monoplace version where at least consider by messerschmitt,and If so any drawing/description of them?
Thank for your answer!

sgeorges4 said:
Just want to know if a all weather or nightfighter monoplace version where at least consider by messerschmitt,and If so any drawing/description of them?
Thank for your answer!
Click to expand...

Not that I know of, and not that I think has ever been written about by anyone (happy to be proven wrong if someone else can think of a book which mentions one!). It seems unlikely, since the pilot would have been severely overloaded if required to operate the radar unit while also flying the aircraft, managing the navigation, radio etc. on their own in darkness. And why bother when a two-seater conversion of the Me 262 wasn't that difficult?
S

The original drawing that the re-draw on p753 of Smith & Creek's Me 262 Volume 4 is based on, plus a sketch from the same set of drawings, showing two different arrangements of the rear-set engine nacelle in profile. Other sketches in the set, which I don't think Smith & Creek show, include an Me 262 with delta-wing configuration and Arado-style crescent wing.

newsdeskdan said:
Me 262 with delta-wing configuration and Arado-style crescent wing.
Click to expand...

Wow! Will this make it into your next volume?

newsdeskdan said:
Me 262 with delta-wing configuration and Arado-style crescent wing.
Click to expand...

Wow! Will this make it into your next volume?
Click to expand...

Dear members,
who either understand German or live in Germany,
this bookazine "Flugzeug Classic Extra - Messerschmitt Me 262" will be published in followings days here in Germany according to my local newsagent at the main train station, who I asked yesterday after work on my way home. It might be laid out over the weekend before the official publishing date next Monday on Septemter 9th, 2019.
Link: https://verlagshaus24.de/messerschmitt-me-262
E

Product information "Aircraft Classic Extra"
The Me 262 was the first mass-produced jet fighter in the world. and its emergence was sometimes as adventurous as its Einsatzgeschchte. In the first part of its new series, Aircraft Classic tells the story of the wonder jet from the early planning stage to the almost production-ready V-pattern. The magazine offers previously unpublished drawings and a wealth of rare footage.
product details

I've deleted Hesham's post. It contained lots of great pics from the Aircraft Classic Extra above. A PDF of the magazine is already being distributed online illegally before the magazine hits the news stands. we should not encourage this. If you are interested please buy a legitimate copy.

Sorry for that my dear Paul,

I don't read any date on it,so I thought it published early this year.
S 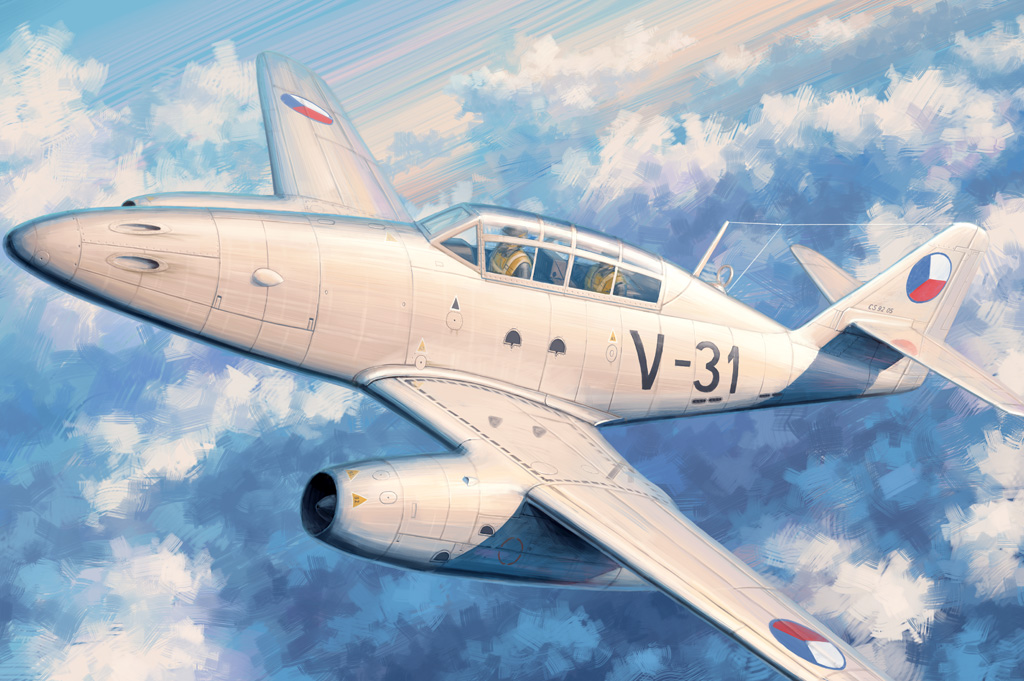 www.super-hobby.fr
was it considered? Because the V-31 doesn't seem to have bmw 003 for me: 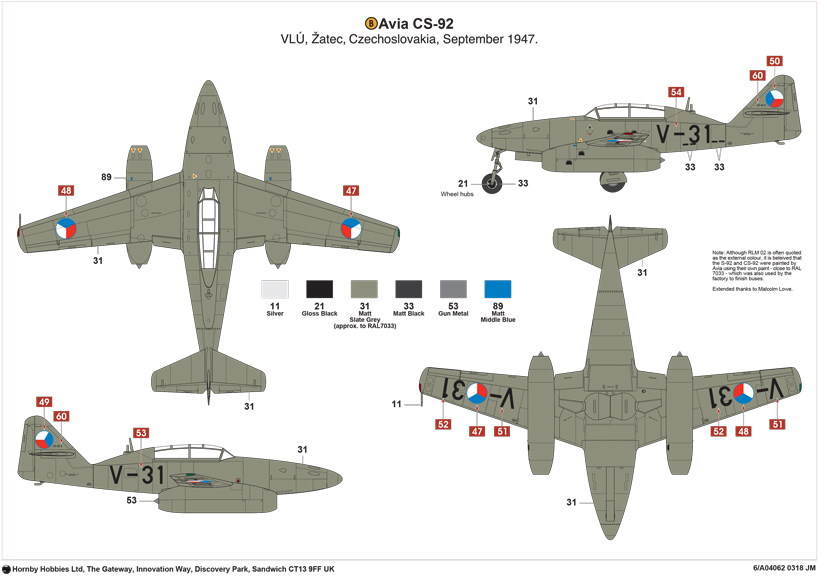 what 262 variant were considered to befitted with R4M / X4 krammer?
S

while searching about the B1a/u1,I found this one: 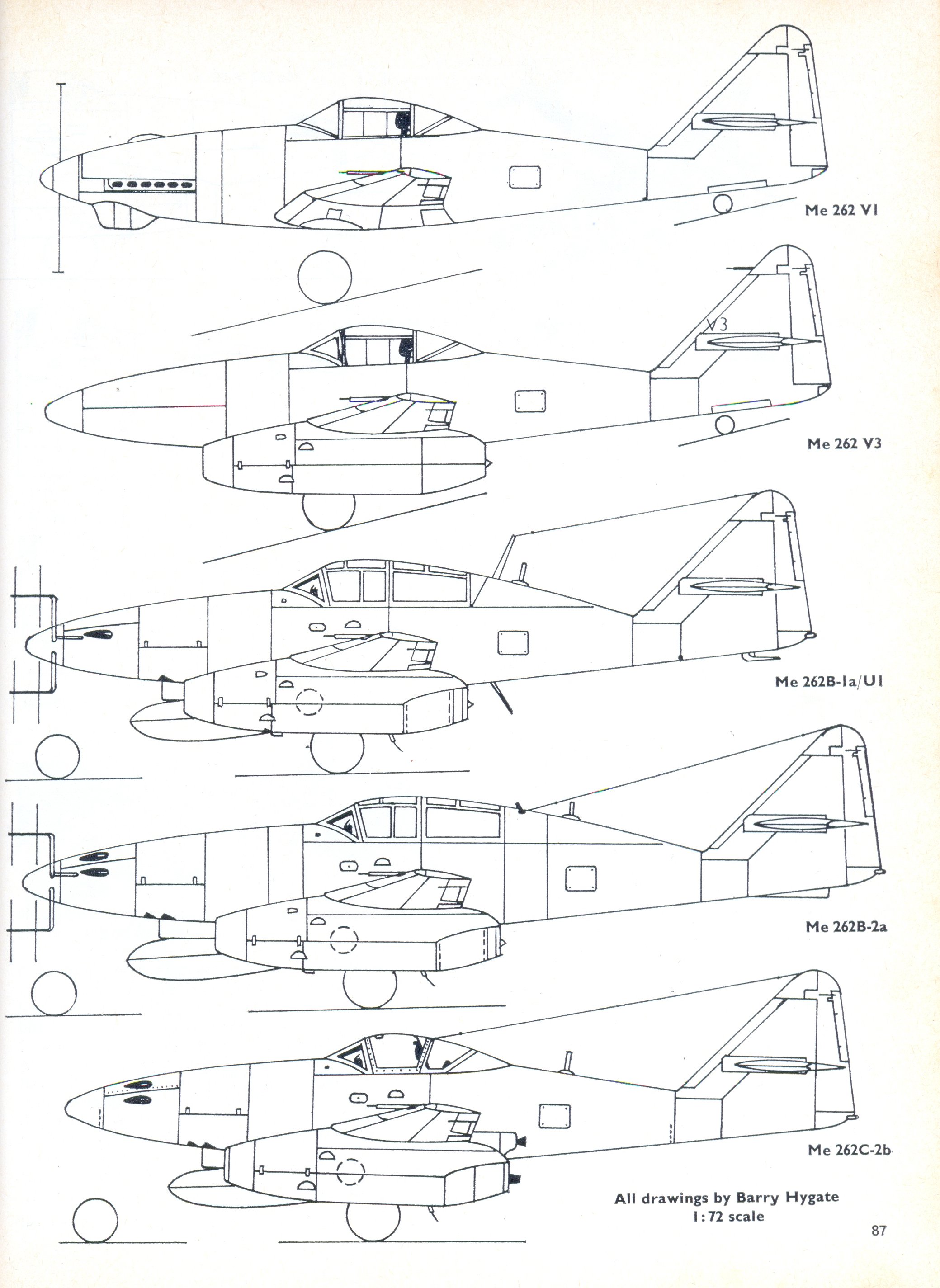 Airfix 1/72 Messerschmitt Me 262 - Conversion to Prototype

This article shows how to make the Me 262 V1 prototype by converting the Airfix Me 262-2a kit. It is a conversion that I have wanted to do since the

wich variant was considered for the X4 beside the A1a?

rocket in the nose schwalbe real or not?

It's the SG 500 Jagdfaust, not rockets. The whole concept could be real, although tests of the SG 500 conducted with Fw190 showed, the weapon produced heavy blast when fired, so the barrels had to be mounted in wings far from the fuselage, to avoid damage.

Plus anyway, Me-262 and B-29s, the author of that CGI shows his disregard for any veracity...
P

dan_inbox said:
Plus anyway, Me-262 and B-29s, the author of that CGI shows his disregard for any veracity...
Click to expand...

I believe the logistics effort required would have been huge and the aircraft itself overkill for the mission. Much better to use the B-29 for the pacific theatre where the extra legs of the aircraft were in real need.
S

Were the radar tested on the V056 planned/considered to be on the B1a/U1 or other nacthjäger based on the 262? 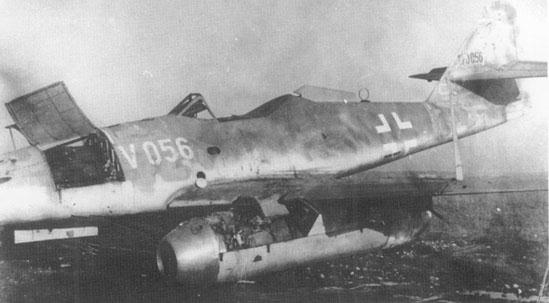 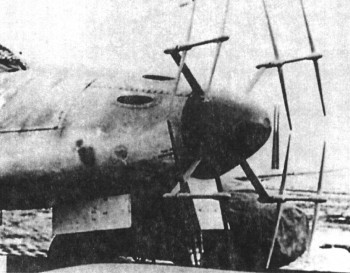 PlanesPictures said:
Then why not B-29 in Europe?
Click to expand...

Simply because B-29s were not used in Europe during WW2. Like Foo wrote, their longer-range was more needed in the PTO. ETO used B-17s and B-24s.
A modicum of fact-checking is always useful before embarking on a project.

Now your pictures are very good and I enjoy them. I just prefer when they fit in history as we know it.
A

Actually, contrary to most everything else that has appeared about using the B-29 in Europe, the USAAF had every intention of using the aircraft and flying it out of the UK. However, according to my original documents (and assuming I am remembering the specifics precisely from here at the kitchen table) the USAAF got into a major pissing match with the RAF and UK about strengthening and extending runways, new taxiways and hardstands, etc., so the B-29 could be used. THis dragged on long enough that the B-29 was not really needed in Europe. On top of that, the AAF was planning on replacing ALL B-24s in all theaters with the B-32 which, had it actually happened, would have been a tremendous force multiplier. Going again from memory, one B-32 would have the equivalent impact of eight B-24s. This is going to be covered in my and Nick Veronico's upcoming book which we hope to have in print by late 2020, "Dominator - The Untold Story of the B-32". And believe me when I say the extent of the untold story is truly staggering.

Anyway, I've found no indication anywhere that the AAF didn't want to use the B-29 in Europe for fear of it falling into German hands. If anyone has any OFFICIAL documents indicating this I would love to see them.