Me 262 - Projects, Pre-Projects And Variants

Thank you for your reply.

A short but worthwhile video. 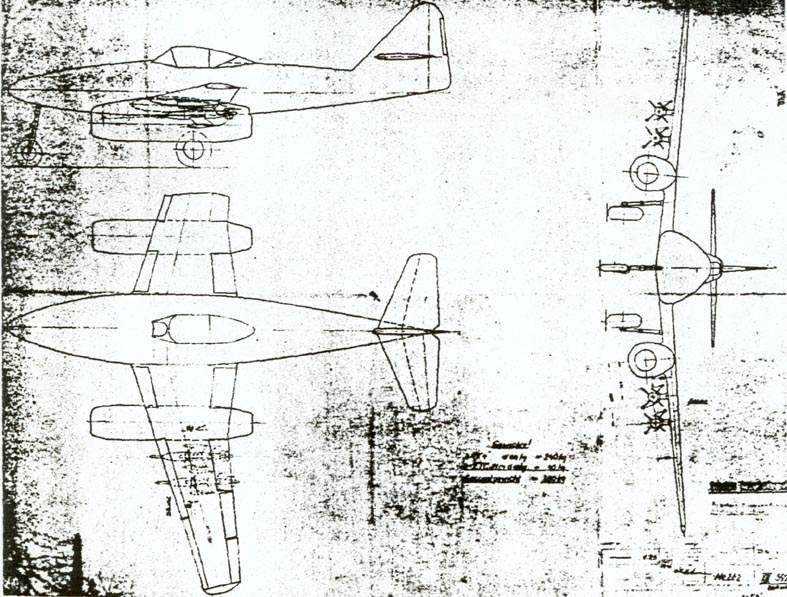 Also wondering if the X7 Rötkapchen was considered for the 262
http://modelarchives.free.fr/photoscopes/X4_P/index.html (french article on the X4 and X7)
I

sgeorges4 said:
any information on wich variant were considered for the X4 beside the A1a (hobby boss put 4 X4 under their A1a/U4 but I'm not really sure it would work well)

Also wondering if the X7 Rötkapchen was considered for the 262
http://modelarchives.free.fr/photoscopes/X4_P/index.html (french article on the X4 and X7)
Click to expand...

I've often wondered how well a wire-guided, optically tracked missile like the X-4 would have worked on a jet fighter. First generation, post-war, wire-guided anti-tank missiles were hard enough to use from helicopters and piston-engined light aircraft even when targeting stationary bunkers and slow-moving tanks. On these platforms, the missile operator and pilot were separate people. In an Me262 (or Ta183, Me P.1103, etc.), I suspect that X-4 would have imposed a very heavy workload on the pilot, especially given the high closing rate of the jet when attacking bombers and the need to keep an eye out for fighter escort. Unguided barrage rockets like R4M seem like a better match for jets.

The X-4 would likely have been most effective against bombers while they were locked into their bombing runs. I suspect they would also been useful against aircraft taking off and landing from airfields.

Just so you know and to members especially, who understand German:
Last week part 2 of the German magazine "Flugzeug Classic Extra - Number 14" about the Messerschmitt Me 262 was published here in Germany.
Link: https://verlagshaus24.de/me-262-teil-2
No e-paper version so far.
In this copy is a nice three-view drawing of the Me 262 V7 "VI+AB" shown. For me unknown, this prototype had an installed pressurized canopy. Unfortunately the prototype crashed and exploded at Lechfeld on May 19th, 1944. The pilot Unteroffizier Hans Flachs was killed.
Part 3, which will be probably publish in September 2021, will have more information and pictures about the Me 262 projects.
Last edited: Sep 14, 2020
I

Grey Havoc said:
The X-4 would likely have been most effective against bombers while they were locked into their bombing runs. I suspect they would also been useful against aircraft taking off and landing from airfields.
Click to expand...

I was assuming that the X-4 was intended for use against bombers, probably in a rear pursuit attack, which would reduce the relative closing speed by 100-200 mph. Attacking aircraft on the ground seems to me like it presents very nearly equal problems for a fast jet. So that doesn't change my analysis. I might be missing something, of course. But given the operator workload implied by the missile guidance approach and the performance of the aircraft in comparison to the targets, I cannot see the X-4/Me-262 combination being successful, especially in a single-seat version of the aircraft.

The pilot has to keep his eye on both the target and the missile tracking flare while flying both the missile and the aircraft to different destinations by simultaneously manipulating two separate joy sticks and a rudder bar. Even if his target is stationary (on the ground) or relatively stationary (like a bomber on a bomb run) the pilot himself is moving fast in three dimensions at once. He has no good range indications to indicate how quickly he is closing, so colliding with the target, other aircraft, or the ground while watching the missile is a problem. At the same time, he also has to watch out for fighters and keep some kind of eye on aircraft health (temperatures, fuel level, rpm, etc.). All that sounds like a tall order, particularly given Allied air superiority. He could reduce some of the problems by throttling back and making a slow approach. But I doubt anyone would want to do that with Mustangs and Thunderbolts all over the place. Salvoing R4M rockets and following through with perfunctory cannon fire as you flash by seems both much more practical and much more survivable.

I suspect that the problems with workload explain why the post-war, first-generation, wire-guided ATGMs that evolved from German wire-guidance technology were deployed from the ground, from relatively slow, multiseat light piston types like the Dassault Flamant, or from hovering two-seat helicopters. Even then, the gunner's workload was high enough that later generation wire-guided weapons used SACLOS, semi-automatic command to line of sight, where a sophisticated sight matched the missile course to the aimpoint defined by the gunner.

Notably, radio-command guidance also proved unsuccessful when it relied on the pilot flying the missile. The much faster, radio-command guided US Bullpups were allegedly completely ineffective, because manually flying a missile by watching a tracking flare while flying a high-performance aircraft like the F-105 was simply not a practical proposition.

On a side note:
View: https://www.youtube.com/watch?v=7S88FsFE5EE

From, Svenskt flyg under kalla kriget

From the East German magazine Fliegerrevue, issue January 1975, page 44.
The Messerschmitt Me 262D had 12 recoilless rifles SG 500 Jagdfaust/Jägerfaust as "Schräge Musik" against bombers in the nose.
The Messerschmitt Me 262E-1 or E-2 had as under the wings also 24 rockets R4M in the nose.
I can't prove if these projects were real or just an interpretation by the artist and/or author of the article.