Widely known for his succesful work on unmanned aircraft models and probably inventor of the
still used rubber engine, Alphonse Penaud worked on designs for man carrying aircraft, too.
Besides his attempts to build an ornithopter, in the 1870s (!) he designed a monoplane amphibium,
driven by two props and with retractable landing gear. Absence of a suitable engine prevented
any attempt for a realisation.
(drawings from the "Modell" magazine, October 2013)


This was based on Tissandier's collection of drafts. See attached the source drawing.

Thanks for that clue, "Tissandier collection" seems to be a good starting point for furter
research. The drawings surely were actually based on those originals, the new ones were
made as preparations for building a flyable scale model, constructed by Jupp Wimmer
and first flown in 1989 (see attached photos from the mentioned mag). So the ability to fly
was in a certain way, actually proven

Another plan view of Penaud's design which I found was sourced from Octave Chanute's article, 'Progress in flying machines' published within The American Engineer and Railroad Journal, in 1894. 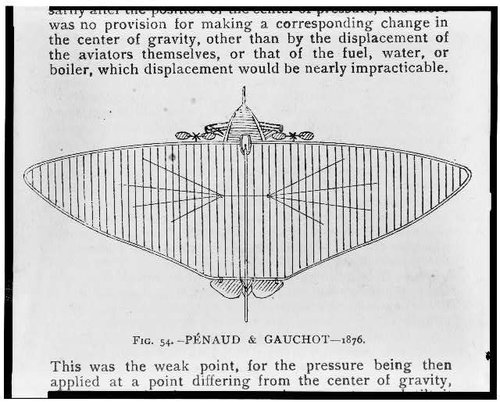 There is a small piece on the Penaud model design featured in the video "The Secret of Flight", programme 3, which covers early pioneering aviation, and can be seen on You Tube. The fascinating thing about this series is that it was presented by none other than Dr Alexander Lippisch! Another fact was despite the success of his models, Pénaud was unable to secure either interest or funding to investigate his full sized designs into actual physical machines. In despair, and having suffered for some years from osteotuberculosis, Penaud took his own life on Oct. 22, 1880. Before his death, he gave all his technical drawings to Henri Giffard, the noted balloonist. Giffard then took his own life two years later, for unrelated reasons.
Last edited: May 19, 2020
You must log in or register to reply here.
Share:
Facebook Twitter Reddit Pinterest Tumblr WhatsApp Email Link
Top