Born in 1893 in Absberg / Germany, Reinhold Tiling was begun to work on rockets during 1924. For a safe landing
of his rockets, he developed the two techniques: The "Kreiselflugzeug" (Gyroplane), where the tailplane switched
to a kind of rotor after burn-out of the rocket engine, decelerating the descent. Reinhold Tiling filed a patent for this
method in 1929. The other technique used told-out wings, forming the tail during ascent. Tiling built several rockets
of this kind, which were tested very succesfully (files 01 to 03). The next planned step was the construction of a manned
version. At first he proposed just a bigger version of his earlier constructions (length 8,00 m, span 13,00 m, file 04),
whereas the next design featured not swing wings, but shiftable wings. in the rear position for take-off and in the forward
position for gliding back (file 05, files 06 and 07 are showing a model built by Martin Fraunheim).
On the 11th of October 1933 Reinhold Tiling died in an accident, when filling one of his powder rockets.
(Photos and information from the Modell magazine, April 2013)

Excellent contribution. I didn`t know about the manned version of Tilling`s rockets. Who would be the hero aboard? He died before german rocketry became under the military. So much for creativeness and civil ingenuity.

Reading this prompted me to learn a little more about this remarkable man. Apparently Reinhold Tilling had served in the German Air Service in the First World War. Following the war Tilling, like many other fighter pilots around the world, earned his keep by becoming an aerobatic pilot, earning a reputation throughout Germany for his daring stunts. In 1926, he seems to have settled down for a more stable life as flight controller of the Netter Heide Airport near Osnabrück. He began to explore rocket technology around this time and started his first experiments in 1928, possibly inspired by a book published at the time by Hermann Oberth "Die Rakete zu den Planetenräumen" (By Rocket into Planetary Space). His first successful launch of a rocket, which used solid-propellant rocket occurred on 13th March 1931. The rocket flew for 11 seconds and reached a height of 1,800 metres. Following this event several further rocket launches were undertaken in the following weeks on the island of Wangerooge, in the Baltic. Just over a month later, on 15 April 1931, Tiling demonstrated a post office rocket which carried 190 postcards, although unfortunately two of the postcards were burnt due to being too close to the propellant. This event, held on the banks of the River Dümmer was witnessed by around 150 spectators, which included dignitaries, military observers and press representatives. The event was so well known at the time that even the New York Times ran a story about the event on its front pages. When the rocket landed, Tilling personally signed all of the postcards and then took them to the local post office at Dielingen. This success led to plans to supply the East Frisian Islands with his flying mail. Although he had shown the possibilities of his efforts, Tiling had severe financial problems, which reading between the lines probably meant that his methodology in assembly was probably not as safe as he wished. On 10 October 1933, in Tiling's workshop in Ahrenshorst, whilst compacting powder, used to power the rockets, led to it overheating, and this created an explosion. Tiling, his assistant Angela Buddenboehmer, and his mechanic Friedrich Kuhr suffered heavy burns. They succumbed to these injuries on the following day, with Tiling himself dying in Osnabrück. In his honour, a crater on the rear of the moon was named after him. Here's a few more pictures, with the first showing Tiling himself in the cockpit of an unidentified aircraft. The second shows Tiling with the postal rocket. The third is one of the 188 postcards, which today reach prices of around 16,000 Euros at auction. The next shows the launch of one of his rockets on Wangerooge isaland. This next picture shows one of the unsuccessful launches, note the wings have kept intact! Finally the last picture shows Tilling with one of his rockets. If you want to watch film of some of the experiments see 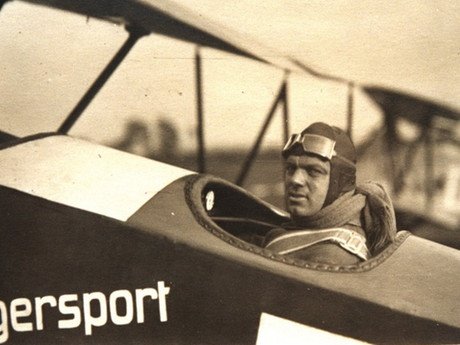 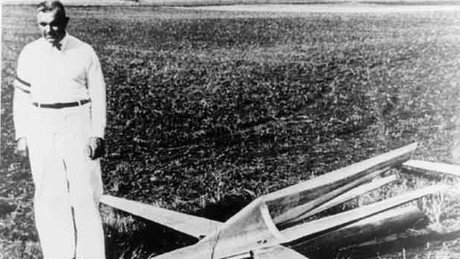 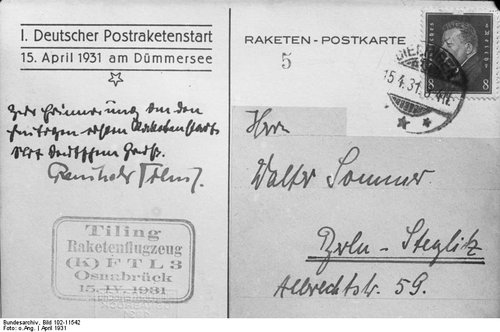 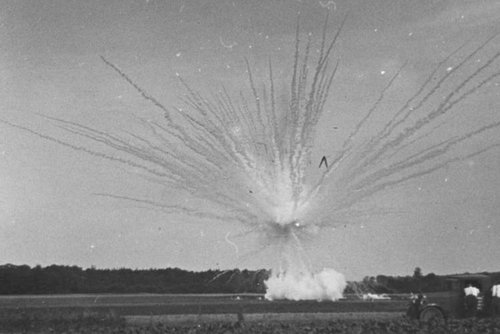 Further to my earlier post I found that demonstrations were carried out at Templehof Airport, in Berlin. However these were apprently terminated by local police after one of the rockets went off course and struck a grandstand! Here's a publicity poster for Tiling along with a further picture of one of the rockets in flight. Also a list of his launches are listed here, source http://weebau.com/history/tiling.htm: 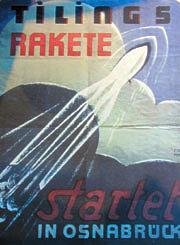