Came across this while researching something totally different. This project was first proposed by Dr. Frank Malina (one of the founders of the Jet Propulsion Laboratory) in late 1960 as an ideal candidate for the first activity of the just formed Academy of Astronautics (now known as the International Academy of Astronautics). At least some preliminary work was done before September 1964, when during that month's meeting of the International Astronautical Federation in Warsaw, a discussion panel discussed various ideas for the project, as well as potential pros and cons (for example, could humans stay for any length of time on the Moon's surface?). Conspicuously absent from the discussion however, was any direct discussion of political, social and possible legal issues relating to Moon exploration (the venue had at least something to do with that).

It was hoped that emplacement of the laboratory could begin in 1974 (based on the progress of the US and Soviet space programs as of that time). Primary research areas were Astronomy (radio and optical though there were some concerns for the viability of the latter in Lunar conditions) and Selenology (Lunar sciences, including Lunar geology). Space Biology and related fields would have been a secondary area. The initial stage of the LIL was intended to be unmanned, with remotely operated soft landed instruments and other equipment including mobile robots, because of the perception that early long term manned surface exploration would be prohibitively expensive for an international project (as well as the aforementioned concerns about the long term health of lunar personnel). A certain Dr. Stark Draper was the key proponent of this approach. Astronomical research would have likely been the priority more or less by default during this initial period. However, it was intended for the LIL to eventually become at least a semi-permanently manned facility once immediate health concerns, as well as lower logistic costs, were satisfied. A design for a large 'Lunar igloo' by the Soviet architect S. V. Forlov was displayed at the meeting as a proposed habitat for this stage of the project. It would have been able to house up to 20 personnel.

I have been trying to find artist impressions, drawings, and other documentation on the project, but so far no luck. A brief mention of the project can be found in the September 17th, 1964 edition of the New Scientist.
Last edited: Jan 30, 2020
R

So far YOU'RE post here is the only thing coming up with a google search I tried a few variations and came up with this bio:

The Lunar International Laboratory (LIL) project of the International Academy of Astronautics was begun upon the proposal of the editor at the First Special Meeting of the Academy at Stockholm on 16 August 1960. The late THEODORE VON KARMAN, first President of the Academy, appointed the following...
www.springer.com

Oh hang on there's a partial at Google books:

The Lunar International Laboratory (LIL) project of the International Academy of Astronautics was begun upon the proposal of the editor at the First Special Meeting of the Academy at Stockholm on 16 August 1960. The late THEODORE VON KARMAN, first President of the Academy, appointed the...
books.google.com

According to this link:

After the discussion panel in 1964 the LIL Committee organized and held four total LIL symposiums. September 16, 1965 was the first, held in Athens. The second was held on 13 October 1966 in Madrid and was on Life Sciences and Lunar Medicine. The third was on 28 September 1967 in Belgrade and covered physics and chemistry. The fourth and final symposium was on October 17, 1968 in New York and covered applied science research and utilization of Lunar resources. After this last symposium the Committee had its charge changed to include ALL celstial bodies not just the Moon. They then organized and held a "Second Discussion Panel on a Lunar International Laboratory" in Mar de Plata on October 6, 1969. (There must have been more LIL symposium's because I'm finding references to a fifth in 1972 and a sixth but no date)

Bioastronautics and the Exploration of Space

"Proceedings of the Third Symposium on Bioastronautics and the Exploration of Space" has an article by Dr. Malina, (pages 613 to 625) on the LIL. (No illustrations though)

Bingo! Not much to go on but there is an illustration on page 415 here: 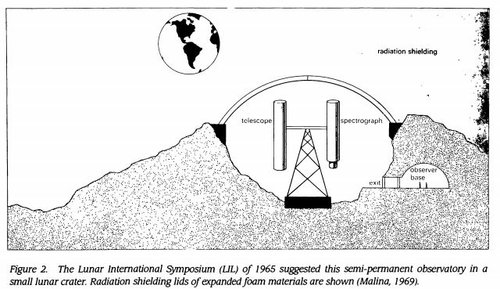 Nice, thanks! My google-fu has been a bit off kilter of late...
R

Grey Havoc said:
Nice, thanks! My google-fu has been a bit off kilter of late...
Click to expand...

Serioulsy no problem, I think the search parameters "Lunar International Laboratory Design Concept" was like the fifth variation I tried. I got lucky
(And as an aside, there is a nifty space combat miniatures game called "Full Thrust"... NEVER PUT THAT IN A SEARCH BAR ON A GOVERNMENT COMPUTER! NEVER! Just a word of advice )