I assume my almost total ignorance on this small german manufacturer. All that I know is here. As usual, if someone knows more please fill in the blanks:

A new book (volume 1 of 2) was published recently:

It contains descriptions of all Klemm planes and a history of the company.

The second volume should contain among others a list with all the preserved, stored and active Klemm planes.

please Viggen,can you display its index ?,and thanks.
V

Unfortunately, I don't have it with me and now, with the local lockdowns, I am not able to go get it ...
But, if you look for example at Amazon.co.uk, they have a very nice preview of the book!
W

You can view the index here (clicking the book cover):

I cannot recognise what the Klemm Kl 154/155 was. Does anyone know about this?

Ditto! The E34 was a biplane training aircraft (love to see a drawing) and the E37 was the Siebel Hallore ( an early project ).

I've just checked in the book: the RLM 154/155 designations were allocated to Klemm, but not used, as seen in Andreas Parsch's website. The author does not had to this information.
F

Wurger said:
I've just checked in the book: the RLM 154/155 designations were allocated to Klemm, but not used, as seen in Andreas Parsch's website. The author does not had to this information.
Click to expand...

all source also said the RLM 153 was not used,but we finally
found it as a real design,with its small Model ?!.
L

Did anyone hear about a Klemm rocket powered aircraft development of about 1934/35?
It should have been a study with a Klemm L25d cutted fuselage and a double tail.
Conventional Hirth engine in front, but rockets in the cutted rear part of the fuselage.
I am not looking for the Tilling-Klemm, which was armed with rockets,
but for a rocket-powered Klemm.

Very interesting . What is your source ?
L

richard B said:
Very interesting . What is your source ?
Click to expand...

We are currently discussing early rocket applications for aircraft in the 1920s and early 1930s
and got an anonymous model aircraft photo, which shows the above design.

We know, that Valier was in contact with von Langsdorff of the Klemm company about utilizing L20s for rocket driven flights in the 1920s.
However, we have no traces, that this contact led to anything.

The model aircraft wears D-ERAK as a tailsign, which was originally a Klemm L25dVIIR delivered to DLV in April 1934.
Interestingly this aircraft was not transfered to NSFK in 1938, but it was already withdrawn from use in February 1938,
which was very uncommon.

However, the utilization of a rocket battery in the model aircraft would have followed the very early approaches of the 1928/29s,
which was already obsolete in 1934 and later. That makes us believe, that the model aircraft is pure fantasy.
But probably someone here has a real photo, a drawing or documents, which confirm the existence of such a rocket approach with a L25d in the 30s?

Please , could you show us a picture of the model ?
L

That's the model.
Does not show any Klemm characteristics except the fuselage. 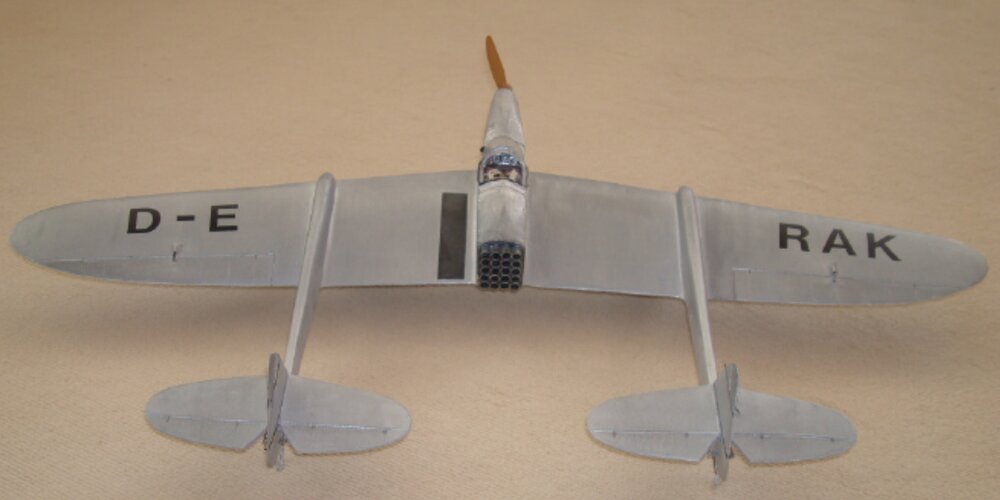 Maybe something related with this mysterious design ?