there is a little different,please see the drawing from Luftwaffe Archive site;

That's much better, I think, just compare it to photos. The other looks to me, like
based on descriptions only (cockpit has more the shape of that, of the He 177 A-7,
tail turret, wheel spats with wrong shape ...), so errors would be understandable.

I could be wrong, but shouldn't the following topics be merged with this one?

Production images of the 6 engine V2

Welcome back, Gary! Anything on your "fetiche", Blohm & Voss?

These are great images!

That are unique picture on Ju 287
V

Another rare photo of the Ju-287V-3 concept:

Main landing gear is twisted then retracted to dodge the flap.
We can see something at both side of the fuselage near wing trailing edge. What is this? STARTRAKETEN(5000kp START ROCKET)?

pometablava said:
Is that EF-132 B2 a real project?
Click to expand...

and my dear Blackkite,no need to repeat sending the same drawing.

pometablava said:
Is that EF-132 B2 a real project?
Click to expand...

Absolutely real. As far as I know the construction of two copies of the EF-132 is this version, powered by the AM-TRDK-01 by A.Mikulin was to be completed by September 1948.

By the beginning of 1948 was nearing completion manufacturing layout, detailed engineering went aircraft parts and industrial equipment. Some systems and components - chassis/landing gear, infantry turrets - were ordered by other plants. The aerodynamic laboratory plant completed purge model airplane. Overall, however, the pace of work lagged behind scheduled. It became clear that to begin testing the machine in time will fail.
At the same time the Council of Ministers №2055-805 canceled the development of the most promising German planes - long-range bomber EF-132.
Click to expand...

Many thanks borovik-san as usual.
EF-132 B2 wing plan form is very unique.
EF-132 FSW three side view drawing is for the first time for me.Fuselage is large.
Also we can see an intermediate version of the draft with normal swept wings isn't it?
It's vertical tail stabilizer area is small compared with FSW version.
FSW has inverse influence for directional inherent stability.

on dead http://www.oocities.org/hjunkers/ju_home.htm
was reported the jumo 211 A/B

I' m confused because on others sources they speak about DB 600 engines !

Does anyone have a legible copy of the Ju 287 V3 skin plan (Haut-Plan) by any chance?

I am very interested in the dimensions between the fuselage frames. This drawing was reproduced in Horst Lommel's excellent Ju 287 book (page 98 of the Aviatic Verlag edition) but I can't read the numbers. I don't know if a larger copy may have been published in the Schiffer edition of this book?

Just two variants shown in a single drawing. I'm sure there were no plans for an asymmetric arrangement as it just doesn't make any sense.

and here is in first picture anther misprint,and a strange drawing to the EF-132,I don't know
what was the meaning 1946 ?.

Thank you my dear Borovik,

I don't remember it.
S

Some wind tunnel for the junker 287(or EF something I dont know) from the book of Horst Lommel : 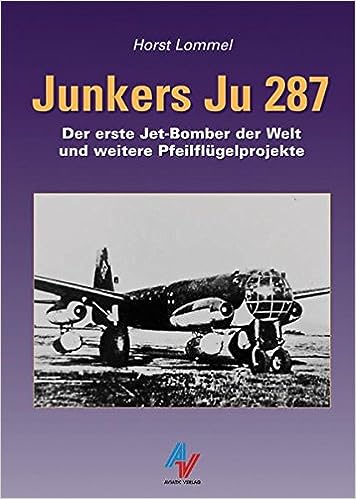 Thanks! The EF 131 was a soviet project or the operationnal variant of the junkers 287?
S