Experimental heavy tank having to replace P.26/40. If an pre-order of 150 specimens were contracted, Armistice was signed without only prototype is finished. The models of P.43 showed its affiliation with P.26/40 without any doubt. The tank weighed approximately 30 tons, was propelled by an engine of 420 hp and was armed with a gun of 75/34. Its frontal shielding was of 80-100 mm and its side shielding of 50 mm.

Another version of experimental heavy tank having to replace P.26/40. As for P.43, the end of the war will put a term at the project. This version was to be armed with a gun of 90/42 mm.

Someone knows where can I get more pictures and profiles of this tank?
N

Hi Mantus and Airman,
by chance I found your old post. In the bibliografy there is a picture of a model labelled as '1:10 scale wooden model of the P.43'. Perhaps it is representative of the intended series version P.43bis with longer barrel 75 or 90-mm gun.
Another photo of an upper view of a desk model was already captioned P.43 but it could be also an intended developed version of the P.40 as it appears to be near identical to some early representation of it.
P.40, in spite of an unreliable engine, impressed the German Army and was shawn to Hitler together with the projects of the most modern tanks and Panzerjaeger on October 1943. All the available P.40 were delivered to Ordnungpolizei Panzer-Kompanies and one Waffen-SS Brigade in Italy. The P.43 instead never proceeded beyond the early drawings and models
Nico

There should be another thread on the P43 in this forum with plenty more pictures but I can't seem to find it using the search function. If it's disappeared, I'll upload the pictures again.
P

An interesting incorporation of ballistic shaping if both hull and turret for it's era and by the Italian's!!

I hope you can find that other thread Red Admiral!!

Out of curisoity, does anyone kow anyone at the Museo Storico della Motorizzazione Militare in Rome? This is where the 1/10th model of the P.43 Bis seems to have ended up and there are only two photos that I've been able to find of the study model. I wonder if there would be a way to pay a museum employee/volunteer to photograph and maybe measure the model? I wrote to the museum but never got a response. . . .

any real drawing of this P.43?

Grey Havoc said:
Going back to the WWII and the period immediately preceding it:
Top 5 Rare Italian Tanks That Were BADLY Needed in WWll

A couple of the interesting video comments:

Paolo Viti1 hour ago (edited)
As an Italian I knew quite well the Italian military situation especially during the thirties, almost handled by real amateurs starting with the combined major staff, army, navy and aviation that hardly communicated with each other. This staff had little knowledge, among many matters, on techinical issues and as a consequence they gave bad directions/advice to important firms like Ansaldo or FIAT in order to improve their productivity yet those same firms in order to save money pocket as much they could never did serious research and stuck to bolted/riveted armour, very slow production and ensuing obsolete tanks before even being drafted. Without writing a book it is curious to know that already during the end of the 1st WW knew that bolted/riveted armour was dangerous and knew that sloped armour offered better protection. They knew very well that the Germans in the late twenties were already mastering welding techniques and Ansaldo has been welding massive slabs of armour but nothing came out of it. Finally I want to mention about the the P26/40: altrough the design started in 1940 by direct order of Mussolini (jumping over the bureaucracy!) it was much better than the contemporary Italian tanks yet it was riveted with better sloped armour, it was hydraulic operated and probaby because of a narrow ring so it only had a crew of two on the turret, it had an obsolet suspension that was not effective on high speed. The real problem was the engine that wasted so much time because it was not available for that tank so instead of opting for a powerful in-line aereo engine, I think only on was in production, instead it was decided to devope a new 330 HP SPA 8V diesel engine instead of putting a license production 12-cylinder Maybach HL120 TRM 300 that would have been available in less then one year with it's grearbox so the rest is history but what they did was far too late with very limited resources. Hope I did't bore you....

dcanmore2 days ago
Good video, however, Matilda II is an infantry tank not a cruiser tank. Italians also deployed what is considered one of the best anti-tank guns of WWII, the 90mm Canone da 90/53, it was also used as a naval and anti-aircraft gun, comparable to the famed German 88mm.
Click to expand... 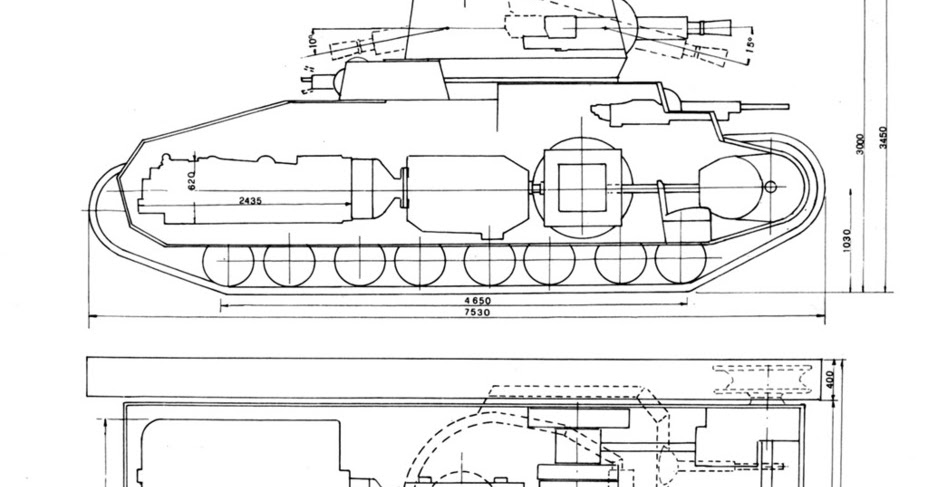 from Yuri Pasholok (and what the video sources)

If anyone is interested, I just posted a photoshopped image of the P.43 in this thread;

Sorry about that! Couldn't make it work so here is a link to the start of the thread.

The picture of the P.43 is on the second page.

Sorry about that! Couldn't make it work so here is a link to the start of the thread.

The picture of the P.43 is on the second page.
Click to expand...