here is an artist picture for Cunliffe-Owen O.A.2,which could
carry 18-passengers and had an estimated speed of 225 mph.

Thanks once more for this unknown twin-boomer... ;D
While the OA-1 is very famous, I did not know this OA-2 I think, I will check.

There's a third one (modified OA-1?), with in-line engines at
http://www.aircrash.org/burnelli/images/mod_oa1.jpg

Thanks again! Hesham, you are great!
L

Probably your illustrations shows the Clyde Clipper , a design
along the Burnelli patenst of the Scottish Aircraft & Engineering Co.

lark said:
Tophe,
Probably your illustrations shows the Clyde Clipper , a design
along the Burnelli patenst of the Scottish Aircraft & Engineering Co.
See thread of 18.11.2006 Clyde Clipper.
Click to expand...

All right, at http://www.secretprojects.co.uk/forum/index.php/topic,1047.0
thanks dear
This Clyde Clipper seems dated 1937 while the OA-2 advertised in January 1940 would be a 1939 project?

I'm going to post this here but it is also relevent for some of the comments in the threads:-

In one or two posts there is some confusion regarding the Burnelli projects undertaken in Britain in the late 1930s. There were two distinct aircraft under development, closely related but nevertheless separate each with its own name.

1) Scottish Aircraft and Engineering was launched in 1936 to built the Burnelli UB-14 under licence. At first this was refered to as the British Burnelli BR MkII and was shown with radials. Later these were changed to RR Kestrels. By early 1937 the project had been renamed Clyde Clipper and a wooden mock-up constructed at the factory in Willesden, north London. Hugo Cunliffe-Owen had ordered one aircraft with which to enter the planned Paris-New York race in late 1937. Advertisements in the first half of 1937 showed component parts being manufactured, but the photos are so heavily retouched it is hard to say whether they are real of just wooden parts of the mock-up made to look like metal. However by mid year the company was in severe financial difficulty, work stopped and liquidation proceedings commenced in October 1937.

2) In mid 1937 Hugo Cunliffe-Owen established a new private company called B.A.O Aircraft. Some time in early 1938 this company commenced work on a Burnelli project for which they employed some of the redundant Scottish Aircraft staff, notably designer William Garrow-Fisher. Perhaps they also bought partially completed aircraft parts, if any had been produced. In July the capital of the company was raised significantly and renamed Cunliffe-Owen Aircraft. Building started on new factory space The new aircraft, named OA and completed by the end of 1938, was visibly a different design from the Clyde Clipper; the engines were radials, the tail booms were deeper and at a less raked angle, and the cockpit shape was modified.

These two projects should not be confused, they are quite distinct.

The other stuff is more vague.

In March 1937 Scottish Aircraft advertised that they were working on three additional projects: the Clyde Carrier, which would have carried a payload twice that of the Clipper, the Clyde Corsair long range bomber, and the Clyde Comet fighter. The first two I would think are likely to be Burnelli designs while the Comet is most probably shown in the patent illustration posted by Tophe.

The Cunliffe-Owen OA MkII, in this thread and first shown in 1939, was a projected cleaned-up derivative of the OA. The artwork shows improved nacelle lines and booms that are no longer canted upwards, otherwise it is much the same as the OA

Many thanks to you my dear Schneiderman,

Hesham, the search goes on but it is difficult to know where to look.
Nothing new to show but here are published drawings of the British Burnelli/Clyde Clipper (compilation from 3 advertisments in 1937) and Cunliffe-Owen OA to show the differences in design, and the patent drawing shown earlier by Trophe that is more than likely the Clyde Comet.

Thank you my dear Schneiderman.

Very nice but you have fallen into the same name confusion trap that I was describing above. That is not the O.A. MkII, or O.A.2 as you call it, it is the original O.A aircraft. This is the O.A. MkII from Flight 30th November 1939. Note the angle of the tail booms, nacelles and registration letters

...and to complete the set, the British Burnelli/Clyde Clipper

Thanks! The refinancing the new company and the story helps explain why there were so many sudden changes in design details (and not-so-detailed changes like the flap arrangement).

As aircraft enthusiasts we tend to assume that the objective of the owners and managers of aircraft companies is to design and build aircraft, whereas their primary driver is always going to be to make money for themselves and shareholders. If they can do that best by designing and building aircraft then that is what they will do, but if there is a lower risk and more profitable alternative then they will choose to do that. In Britain in the mid/late 1930s the second option was looking very attractive; let some other sucker slave away developing a new aircraft, with the risk that it may not be a success, while you go and pick up low risk/high reward subcontract work. From what I have read I think that Hugo Cunliffe-Owen was always aiming to do just this. With the collapse of Scottish Aircraft, in which he may well have played a roll, he was able to pick up a half finished aircraft design, and its designer, cheaply and then use the project to give his new company credibility so to attract investors. I'm sure he was well aware that Burnelli's basic design was now four years old and had failed to sell anywhere. It was not going to be the route to quick profits, or even sales, and I would guess that the construction of the company's extensive new factory was always intended for sub-contract work. In this he was very successful. Sure, if someone had wanted an OA MKII they would build one, but I doubt he had any illusions that this was the way forward.

Many thanks to you my dear Schneiderman.

I would like to locate the cutaway of Cunliffe Owen O.A.2 of higher resolution to the one shared by me, I have made intense searches on the web without success so far, in advance thanks, Motocar

Once again.....it is not a cutaway of the O.A MkII 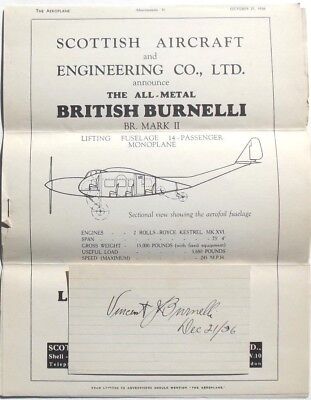 Burnelli built his first plane at age nineteen in 1915 which he flew on Long Island New York. Burnelli built and designed many successful aircraft during his career and continued to promote his "Flying Wing" designs until his death in 1964.
www.ebay.com