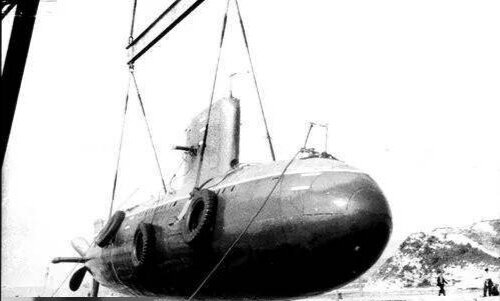 The project started in 1958 and ended in 1960. There was no prototype, only a fourteen-meter long test ship（Lead-acid batteries，speed 9 knot）
Planned displacement 400~500 tons，four torpedo tube，speed 25knot with zinc-silver battery and deltaic diesel engine

What a find!! Quickly going trough the link and it appears that this 032 was Chinese domestically designed small submarine, similar in concept to the Soviet M-class but with teardrop hull!! It was however beyond the capability of the Chinese engineers at that time and was ultimately abandoned. The site also descripes another small submarine project, 030 which was more in the lines of the Soviet post-wwII submarines but also eventually abandoned.

Interesting fact was that this submarine was designed by the same institute that did the Dongfeng 113 fighter project, similarly over-ambitious which Chinese at the time.
Great to see these chinese naval neverwheres emerging!
C