The APHNAS (Advanced Performance High-speed Nuclear Attack Submarine) from 1971 was armed with four torpedo tubes and 20 cruise missile tubes aft of the sail.

Image and specifications from US Submarines Since 1945: An Illustrated Design History by Norman Friedman.

"The role of U.S. submarines is currently the focus of an intense debate, and this book contributes to that discussion in the belief that an understanding of the past is necessary to make wise decisions about the future. In the tradition of his acclaimed warship design history series. Norman...
books.google.com

The new submarine was the first one designed for an entirely passive operation, that is, detecting targets passively at long range and then obtaining an entirely passive fire control solution. She was therefore designed at the outset to have a towed array. The active bow sphere had to be retained as a hedge against Soviet silencing.
Click to expand...

The project was killed by Admiral Elmo Zumwalt in late 1972.

If built, the ship would have been classified as an SSGN. SSGN-01?

In March 1969, the U.S. Navy issued a requirement for the STAM (Submarine Tactical Missile), a new submarine-launched dual role (anti-sub/anti-ship) attack missile. It was to have a range between 9 km (5 nm) and 55 km (30 nm), and carry a new high-performance homing torpedo. STAM was to be a large missile with a length of about 7.6 m (300 in) and a diameter of 76 cm (30 in). This made it too large for torpedo tubes, and therefore a new attack submarine (SSN) type was proposed which would carry 20 STAMs in vertical launch tubes. This new SSN would have been much larger, and therefore much more expensive, than existing SSN classes. The STAM project and the new submarine class were eventually cancelled in 1973. As a replacement, the submarine-launched UGM-84 version of the Harpoon missile was developed and fielded on existing SSNs.
Click to expand...

If built, the ship would have been classified as an SSGN. SSGN-01?
Click to expand...

Nope. The USN has numbered specialty combatant subs (e.g, ballistic missile and cruise missile boats) in the same SS/SSN sequence as the original attack boats, save for the odd exception for SSN-21, -22, and -23. There had already been one nuclear cruise missile sub -- USS Halibut (SSGN 587) -- and lots of boomers, so the practice was well-established. The precise hull number of APHNAS would depend on when the first one was ordered and how the previous production line was closed out, but something in the low 700s (e.g., SSGN-710) seems likely.

This site featuring data on the United States Missile and Rocket systems mentions a "New" Nuclear Submarine class to be equipped with 20x UGM-89 Perseus / STAMs (Submarine Tactical Missile) but both the submarine and the missile program cancelled in 1973.

Do anybody know more about this 1973 USN SSN proposal? By the time frame it looks like a follow up / improved Los Angeles or earlier VLS Los Angeles class?

Topics merged, thanks for the clue
Last edited by a moderator: Dec 3, 2020

Found this Cruise Missile development history on DTIC, @Tzoli might be interested to read it on page 151. 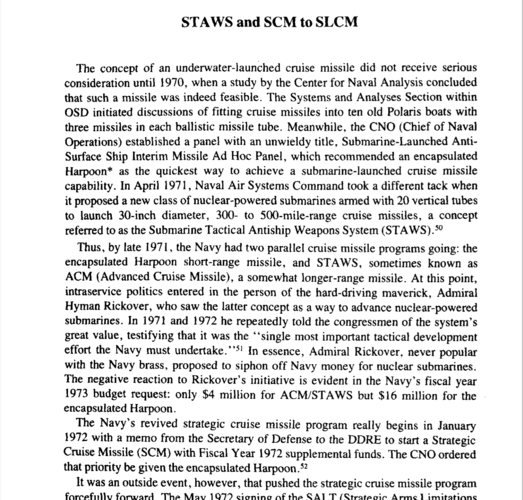 No. not really, Submarines ain't my favourite ship type.

Are there more details about the missile itself? Guided weapons is my interest)

Are there more details about the missile itself? Guided weapons is my interest)
Click to expand...

Asides from cruising the the DTIC archives I don’t have anything else, sorry mate.

There's more in Norman Friedman's US Submarines since 1945, including a table of the specifications of 3 different designs.