Does anyone have a three view? There was one but the site, now, disapeared. I also need info about the butterfly tail version.

In 1942, with USAAC handling the day bombing campaign against Germany, the Bristol Buckingham became redundant.
(the Mosquito also contributed [http://www.aviastar.org/air/england/bristol_buckingham.php])

This left a hole in the Bristol design office and, at the Ministry, they asked if Bristol would like a design study contract for a bomber to carry 80,000 lb to Berlin. (a B-36-class bomber). No type number was raed. This was at first a free exercice but later, 8xBristol radials buried in the wings made the wing very deep, and upper and lower four cannon turrets made the fuselage portly. The butterfly tail, November 1942 design was 225 ft span and 5,000 sq ft area. Rotol contra-rotating 6-blade propeller was 16 ft in diameter. The aircraft would have been unpressurized and defensive armament would have comprised 12x 20 mm cannon.

In 1946, a Bristol advertisement (I think hesham found it and it's here in the forum) appeared showing a direct civil version of the "100 ton bomber". Finally, although a different configuration was selected for Type Number 167 Brabazon, it retained technical solutions developed in the bomber design work.

That's exactly what I was looking for. I download both but I lost them at a computer crash...

I guess the pusher engines caused the engine mass to be far aft, and to balance the center of gravity, the fuselage was pushed forward. This caused there to be lots of area in front of the wings and little behind, meaning bad directional stability and a short tail arm, so the tail had to be humongous.

Compare to the more conventional (though a lot smaller) Vickers Windsor:

"The Brabazon was derived from proposals for a "100 Ton Bomber" submitted to the Air Ministry in early 1943 from Bristol and other British aircraft companies. The requirement was for a very heavy long-range bomber, comparable to the American Convair B-36 of the immediate postwar period. The Bristol submission for the 100 Ton Bomber featured four pusher contra-rotating propellers, each driven by twin 18-cylinder air-cooled 18-cylinder two-row Bristol Centaurus radials. In early concepts, the aircraft featured top, bottom, and tail turrets, each with four 20-millimeter cannon, and an internal bomb-bay; defensive armament was later dropped, altitude being used for defense"

I have seen on Bristol Designations that exist a Bristol Type 168 or a bomber version of Bristol Type 167 : is it connected with specific Bristol B.1/42 ?

Thanks a lot. Amazing design!!

I have seen on Bristol Designations that exist a Bristol Type 168 or a bomber version of Bristol Type 167 : is it connected with specific Bristol B.1/42 ?
Click to expand...

WesWorld is some guy's weird Alt-History thing, so anything pulled from there is probably fictional.

As the author of that Wesworld entry I can safely say that its based on the real-world Giant Bomber designs as outlined in BSP Vol.3, but I've made some AU tweaks.

As I've said before in another thread, Wesworld is an AU so nothing there should be considered gospel even if the members there have used real world designs as a basis.

"the Bristol 100 Tonne Bomber designed in 1942, powered by 8 Bristol Centaurus engines driving pusher contra rotating props. Its wing span would have been 225 feet and 213 foot 6 inches nose to tail. The max fuel load would have been 48,800 lbs. Pretty epic for 1942."

There is a surprising and beautiful three side view drawing for following 100 ton bomber in the great Tony Buttler-san's BRITISH SECRET PROJECTS FIGHTERS & BOMBERS 1935-1950(Page 124).

(forgive if posting in the wrong area/topic ) looking for identification help on this 4 engine aircraft . Possibly a Boeing , Martin ? or Convair 1950's era ?
Any assistance would be most helpful . 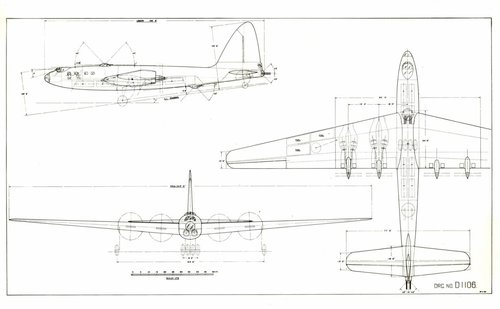 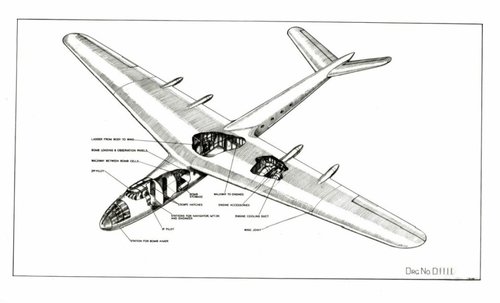 Welcome shock !
The answer to your question should be here, it was some years earlier !

Orionblamblam said:
Say... didn't there used to be a "found on ebay" sub-forum?
Click to expand...

Paul merged it with the Found in the Internet one.

Orionblamblam said:
Say... didn't there used to be a "found on ebay" sub-forum?
Click to expand...

Paul merged it with the Found in the Internet one.
Click to expand...

Well, that answers that. Thanks.