Using the word "cruiser" doesn't help anybody, its a meaningless term.

As both TomS and Moose allude to the USN has some fundamental decisions to wrestle with, all of which will be major cost drivers, the Director of Surface Warfare outlines some of them in the above linked article:

Deep magazines: thats lots of VLS cells, especially if bigger cells are needed for the Conventional Prompt Strike weapon in addition to 96-128 (or more?) Mk-41s - thats a major size and cost driver and requires the navy to answer exactly how many cells of each type it needs. With the CPW thats a whole new set of questions around target set and CONOPs.

Big sensor: How big? DDG51 Flight III has 14ft x 14ft AN/SPY-6 arrays with 37 RMAs and that is a massive improvement over the Aegis ships. Many years ago, at the tail-end of CG(X), the USN was looking at 22ft arrays and Raytheon has been touting an AN/SPY-6 with 69 RMA arrays but that would drive up the need for cooling, computing, power, top-weight and space...and thus cost. The AN/SPY-6 programme is now relatively mature so the USN should be able to get a good idea of just what it needs.

Other payloads: Rail-guns and lasers, currently not that mature so assessing exactly what they mean in terms of space, weight and power requirements is going to be a challenge, how do you handle that, do you handle that?

Signature: clearly one of the cost drivers in the DDG1000 programme.

Speed, if you are going to build something pushing 15k tons or more that produces enough electrical power to run all of the above it is going to need some serious installed power for the high sustained speeds needed to provide the Air Defence role for the CVBGs. That will further drive size and cost.

All this on a platform that may be built in relatively small numbers if it gets boxed-in as a CG47 replacement (12, one per planned CVBG as the Navy has been trying to do with the current cruisers), so there might be little opportunity to make changes during the build programme.

As for the DDG51, the Navy managed a near perfect balance between capability and cost just a time when the need to make major structural changes in order to upgrade them evaporated (thanks to VLS and miniaturisation of electronics). A 30+ year build programme is a staggering achievement but moving away from that platform was always going to be hard.
Last edited: Aug 11, 2019
N

Imo it's going to become increasingly difficult to justify procuring large multibillion dollar surface combatants like the Burke, especially if they are just even further upgraded Burkes without the power margin left to integrate directed energy weapons of any consequence. The magazine depth problem isn't going to go away and the coming proliferation of long-range hypersonic missile systems is going to make the imperative to improve survivability against large missile salvos even greater. Navy can talk distributed lethality all it wants but if it continues to pour billions into building large surface combatants optimized for land attack and (charitably) ASW it is going to burn a lot of money for fairly limited capability.

Genuinely new doctrinal concepts badly need to be evaluated if the Navy is going to stay relevant in a world where American naval power is vigorously contested by a near-peer navy with increasingly robust ISR and maritime strike capabilities. If we keep buying an increasingly small number of increasingly expensive major surface combatants that are hard pressed to defend themselves we will find it increasingly difficult to execute any kind of meaningful sea control strategy in wartime. Burke production ought to be terminated after Flight III, but as JFC Fuller noted above, it's going to be hard for the Navy to make that decision. 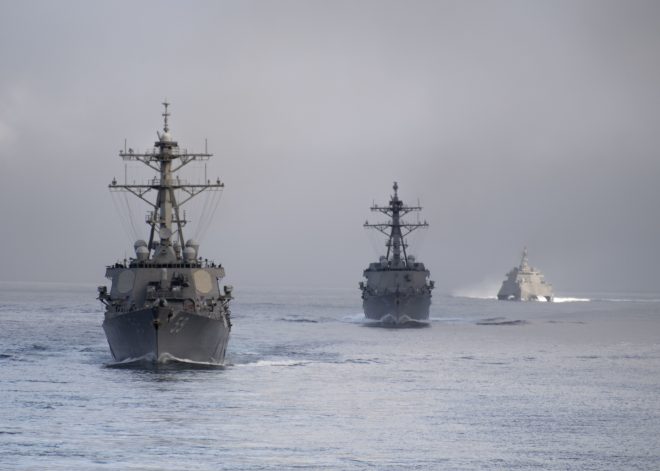 SAN DIEGO – The Navy is striving to field “revolutionary combat capability” in new ships and through mid-life modernizations, but it can do so while keeping risk low by focusing on new weapons and systems rather than radical new hull designs, the program executive officer for ships said. Noting...

Does anybody still have this document?
M

Does anybody still have this document?
Click to expand...

Does anybody still have this document?
Click to expand... 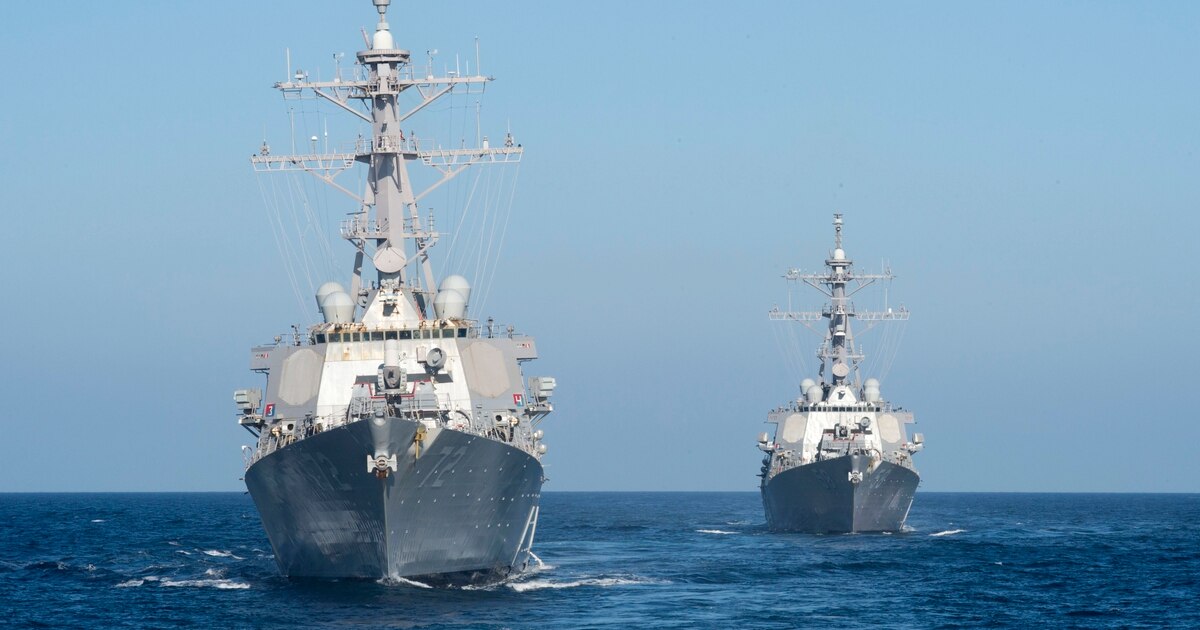 Cost of upgrading Arleigh Burke destroyers may not be worth it, says US Navy

The U.S. Navy says upgrading the Arleigh Burke-class destroyers may not be worth the money, but the move has support in Congress.

Stuff like that makes me wonder if we are going to get a Virginia version of the Zumwalt.

Seawolf Class= Zumwalt Class.
Both are only three ship class that got cancel cause their tech cost too much and had enough teething issues to make it seem not worth it
Virginia class= ????????? Class.
Basically a cheaper version of the before class mass produce without most of the problems... Thru some of the new Virginias apparently rival the Seawolf in stealth and hitting power.

Firefinder said:
Stuff like that makes me wonder if we are going to get a Virginia version of the Zumwalt.

Seawolf Class= Zumwalt Class.
Both are only three ship class that got cancel cause their tech cost too much and had enough teething issues to make it seem not worth it
Virginia class= ????????? Class.
Basically a cheaper version of the before class mass produce without most of the problems... Thru some of the new Virginias apparently rival the Seawolf in stealth and hitting power.
Click to expand...

Ideally? Sure. Unfortunately, there's not much sign that they're thinking that logically.

Although the SSN-21 to SSN-774 changeover was far from smooth and issue-free, the Navy remained admirably focused on getting to the new class and was able to produce something which stayed largely consistent with the original goal to get Seawolf quieting in a smaller, more affordable mass-production boat. What is currently called the Large Surface Combatant program has reset its vision twice (that they've acknowledged) since late 2016, and has pushed the in-service date about a decade to the right. Messaging has been inconsistent, as has the vision for the fleet architecture it will support and even what its primary roles will be. 4 years ago I was impatient but not pessimistic, now I'm increasingly both.

I pretty much gave up when they ditched the Zumwalt hull. A new everything does not inspire confidence given the USNs performance over the last 30 years.
V

A senior Bath Iron Works engineer I worked with a decade or so ago related his experience on the DDG-51 design and build verses the Australian Air Warfare Destroyer design and build, he described the DDG-51 as the equivalent of the entire ship design capacity of the eastern sea board of the United States working on nothing but the new destroyer for a decade. There was no try, only do, they had to make it work, if there were problems they fixed them, cost over runs they absorbed them. The comparison being, had the DDG-51 faced the same level of political and media carry on as the Australian DDG build, the project would have died, because it was bigger, harder, more expensive and had more real problems, it would never have survived the political environment we have today.

Designing and building a new capability is a very demanding and difficult thing, there are mistakes, there are setbacks, schedule slips, design changes, that's why first of class takes so much longer and costs so much more than follow on examples. Unfortunately there are so few big transformational projects these days that many decision makers just don't have the vision, experience or risk appetite required to see them through.

When the other guy is prepared to fail and try again, over and over, and you throw in the towel and revert to safe proven "easy" options at the slightest hint of trouble, then the other guy is eventually going to leave you in his dust, it doesn't really matter how far behind he was at the start, its just a matter of time. Its even worse when you prove something works but then give up on it because its too expensive or conservative elements demand a return to the old ways. That's because the other guy is watching and you have just shown him the way forward, then stepped aside to let him over take you. You saved him years of work and piles of treasure working it out for himself, then not only gave away your lead, but wasted time and money you could have used on stretching your lead on polishing and perfecting the stuff you developed 30 or 40 years ago, while they work towards perfecting the new stuff you walked away from.
You must log in or register to reply here.
Share:
Facebook Twitter Reddit Pinterest Tumblr WhatsApp Email Link
Top