Where On Earth Will NASA's Doomed Satellite Fall On Friday? (Space.com)

This doesn't really belong in this thread, however. 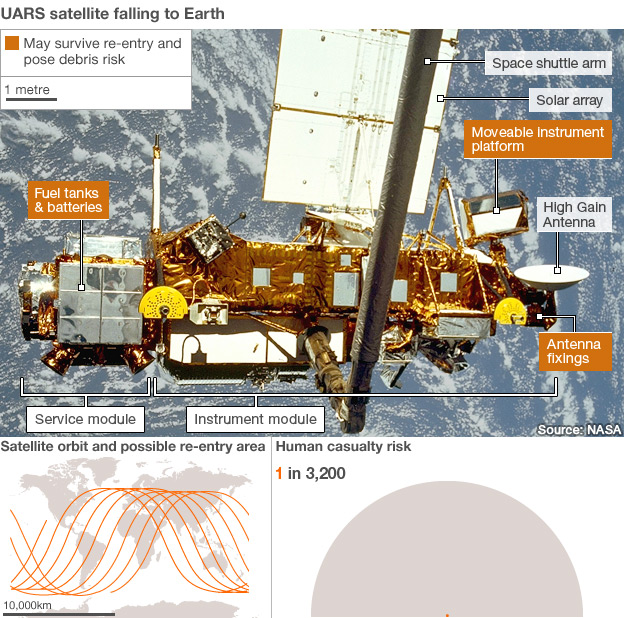 To be renamed the 'Lower Atmosphere Research Satellite'?
A

Soon to become the Unique Aquatic Research Satellite ;D
A

Can't help thnking that UARS was one out of few Multimission Modular Spacecraft (MMS) that included if I'm not mistaken, Solar Max. Those satellites were build to be serviced by the shuttle... and the f...ng UARS that fell on Earth just after the shuttle is withdrawn... how ironic...

From Space.com via msnbc.com:

NASA's falling satellite slows — and now could hit US

Re-entry time frame shifts too, and it may not crash until late Friday or Saturday

A huge, dead satellite tumbling to Earth is falling slower than expected, and may now plummet down somewhere over the United States tonight or early Saturday, despite forecasts that it would miss North America entirely, NASA officials now say.

The 6 1/2-ton Upper Atmosphere Research Satellite (UARS) was expected to fall to Earth sometime Friday afternoon, but changes in the school bus-size satellite's motion may push it to early Saturday, according to NASA's latest observations of the spacecraft.

"The satellite's orientation or configuration apparently has changed, and that is now slowing its descent," NASA officials wrote in a morning status update today. "There is a low probability any debris that survives re-entry will land in the United States, but the possibility cannot be discounted because of this changing rate of descent."

NASA expects about 26 large pieces of the UARS spacecraft to survive re-entry through Earth's atmosphere and reach the planet's surface. The biggest piece should weigh about 300 pounds. The spacecraft is the largest NASA satellite to fall from space uncontrolled since 1979.
NASA officials have said the the chances that a piece of UARS debris hits and injures one of the nearly 7 billion people on the planet are about 1 in 3,200. However, the personal odds of you being struck by UARS satellite debris are actually about 1 in several trillion, NASA officials said.

The sun has had an extremely active week, one that has included several solar flares. High solar activity can cause the Earth's atmosphere to heat and expand, which can increase drag on a low-flying satellite like UARS, making it fall faster.

Late Wednesday, NASA predicted that the UARS satellite would not be over North America when it finally plunged down to the Earth's surface. That scenario has changed now that the 20-year-old satellite's descent has slowed, the agency said.

But where the UARS spacecraft will fall still remains anyone's guess. NASA orbital debris experts have said the satellite could fall anywhere between the latitudes of Northern Canada and Southern South America, a region of Earth that encompasses much of the planet.

"It is still too early to predict the time and location of re-entry with any certainty, but predictions will become more refined in the next 12 to 18 hours," NASA officials wrote in the latest update.

Editor's note: If you snap a photo or observe the re-entry of NASA's UARS satellite and want to share it with Space.com for a story or gallery, contact managing editor Tariq Malik at tmalik@space.com.

US officials now say the fall to Earth of Nasa's six-tonne UARS satellite could occur early on Saturday (GMT).

Estimates of where debris might fall will be narrowed hours before impact.

And a UK team studying the trajectory says the most likely time for re-entry could be after 23:00 GMT Friday, and as late as 03:00 GMT on Saturday.

Most of the decommissioned and now unpowered spacecraft should simply burn up, but modelling work suggests perhaps 500kg could survive to the surface.

UARS is the largest American space agency satellite to return uncontrolled into the atmosphere in about 30 years.

If the estimates for its re-entry are correct, it means the spacecraft will not come in over North America.
Click to expand...

Nasa says its six-tonne UARS satellite penetrated the atmosphere over the Pacific Ocean early on Saturday.

The spacecraft was expected to fall to Earth by about 0500 GMT - officials say it is not possible yet to give a precise time.

The Upper Atmosphere Research Satellite (UARS) is the largest American space agency satellite to return uncontrolled into the atmosphere in about 30 years.

Officials said the risk to public safety was remote.

A statement on the Nasa UARS website read: "The Joint Space Operations Center at Vandenberg Air Force Base in California said the satellite penetrated the atmosphere over the Pacific Ocean. The precise re-entry time and location are not yet known with certainty."

There have been some unconfirmed reports on Twitter that suggested debris might have fallen in western Canada.

Most of the decommissioned spacecraft should simply have burnt up, but modelling work indicated perhaps 500kg could have survived to the surface.

Any pieces of debris should have been scattered over a 800km path; but with more than 70% of the Earth's surface covered by water, many experts said the pieces were most likely to end up in the ocean.
Click to expand... 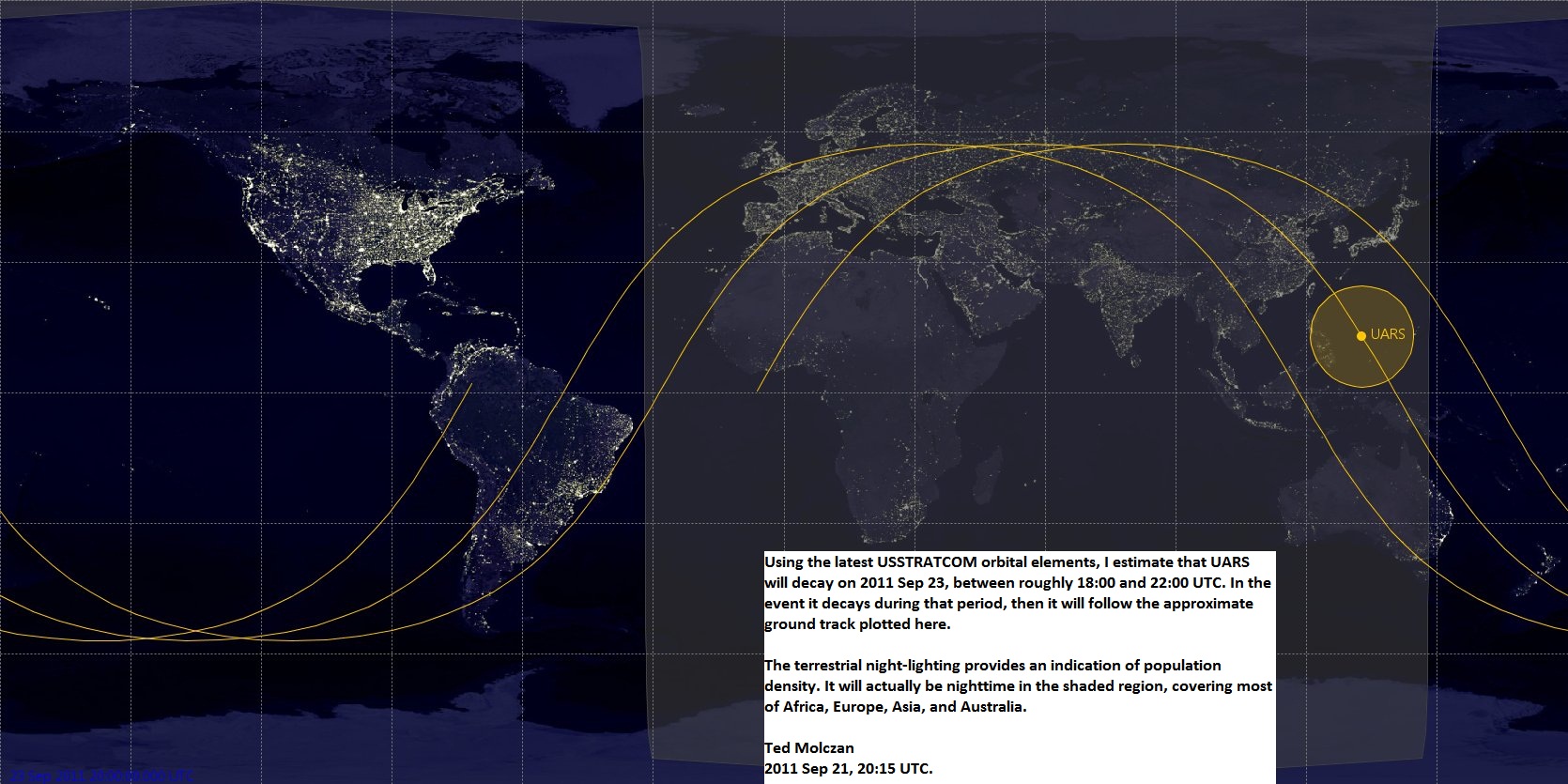 NASA’s decommissioned Upper Atmosphere Research Satellite (UARS) fell back to Earth between 11:23 p.m. EDT Friday, Sept. 23 and 1:09 a.m. Sept. 24, 20 years and nine days after its launch on a 14-year mission that produced some of the first long-term records of chemicals in the atmosphere.

The precise re-entry time and location of debris impacts have not been determined. During the re-entry period, the satellite passed from the east coast of Africa over the Indian Ocean, then the Pacific Ocean, then across northern Canada, then across the northern Atlantic Ocean, to a point over West Africa. The vast majority of the orbital transit was over water, with some flight over northern Canada and West Africa.
Click to expand...

Original caption of image below: DoDʼs Joint Space Operations Center at Vandenberg AFB, CA, has
assessed that NASAʼs Upper Atmosphere Research Satellite reentered the
atmosphere sometime between 0323 and 0509 GMT on 24 September.
During this period the satellite passed over Canada, the African continent,
and the Pacific, Atlantic and Indian Oceans. The mid-point of that
groundtrack and a possible reentry location is 31 N latitude and 219 E
longitude (green circle marker on the above map).
[IMAGE CREDIT: NASA]

And now the defunct ROSAT is going to follow...

ENVISAT coming down would be a big worry

Yes, that would be a pain in the neck at best, especially in the current times.

For those of us who may not be familiar with that particular satellite: