I've dipped my toe into a topic that I previously new next to nothing about and still find myself woefully under-equipped for. Long story short, I'm trying to determine which tanks had thermal imaging sights prior to the Persian Gulf War. Please correct my errors (I'll edit this post) and add to my very incomplete knowledge. 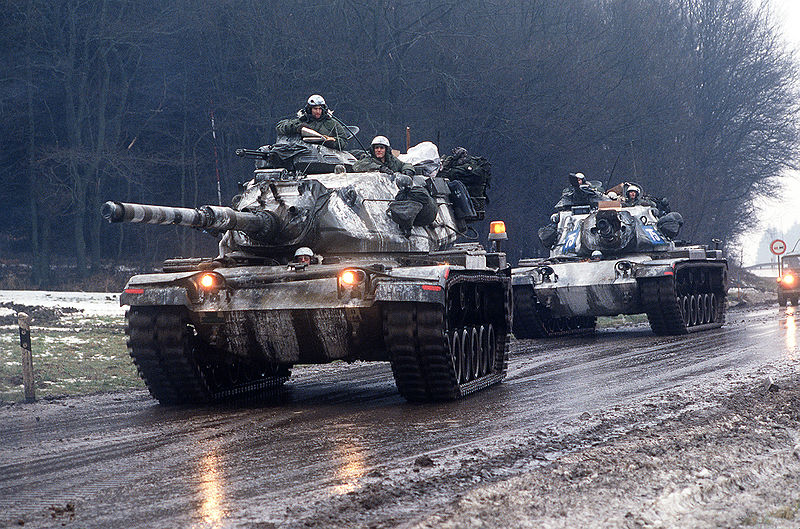 Some sources seem to list the T-80UK command tank as roughly concurrent with the T-80U (1985), but the most reliable sources I've found state that delays with the Agava thermal sight meant that it didn't even enter Soviet Army service, just development and test models. It would enter Russian and export (Cyprus and South Korea) service in the mid-90s, but the T-80UKs were always the last in a batch delivered, suggesting they were still having trouble procuring individual systems as late as 1997.

Open questions I have:
Hopefully some of this information is helpful to others and some people around here that are smarter than me can help fill in some of the holes above.

Logan Hartke said:
This is the first tank type to designed and equipped from the start with thermal sights. The Leopard 2 was designed with them, but the first series of Leopard 2s built did not have them.
Click to expand...

The MBT-80 was also intended from the outset to be equipped with thermal sights coupled to an advanced fire control system.

Yep! Never quite made it to production, though. And the first Challenger 1s didn't get thermals right off the bat. Thanks for the reply! By the way, can you help with any of the open questions above?

Here's an abstract of a paper into the history of French developed thermal imaging systems:

History of infrared optronics in France

I don't have access to the actual paper, unfortunately.

The TOGS system as it was installed in the Challenger was severely downgraded (thanks to Treasury interference that would end up costing a lot of money in the long term but I digress) from what had been originally intended, to the point where the Barr & Stroud IR18 TVFS was used as the primary thermal gunsight (it had originally been proposed for procurement as an off-the-shelf driver's thermal sight for the MBT-80, it wasn't suitable at all for use as a gunners sight). Export customers such as the Jordanians and their Al-Hussein tanks got fire control systems that were generally much closer to what had been planned for British Army use.
Last edited: Mar 19, 2020

With regards as to Sweden, Jungner and Bofors may have been working on a thermal gunner's sight and other thermal imaging systems for the Strv 103 during the 1980s, but I haven't been able to confirm this yet.

British Aerospace had a very interesting thermal imaging system intended for tanks & other military vehicles in the late 1980s, if I can only just find the references again. (There was an article on it in a 1989 edition of the Electronic Times that I seem to have unfortunately lost in a shed disaster a couple of years back).

History of infrared optronics in France

Thanks, Grey Havoc! That's helpful. Again, I'd heard that the TOGS sight wasn't up to the German and American equivalents, but that explanation helps say why that is. If it was a driver's sight that was reconfigured, that would explain a lot.

Interestingly, I've read that something QUITE similar happened with the M1 Abrams. Because Chrysler had a bottom line they had to hit and the turbine power plant was eating up too much of it, so they had to go with a slimmed down version of the fire control for the XM1 that wouldn't reach its full potential until M1A2 variant with a CITV and hunter-killer workflow. When South Korea approached Chrysler a year or two later, they were able to afford the full system that was originally planned, so when the first K1s rolled off the production line in '85-87, they had the fire control that the Abrams should have had and wouldn't get until years later. By some accounts, the K1 Type 88 had the most advanced fire control in the world when it debuted.

The French article is helpful. Thanks for the snippet, overscan. It looks like the French were relatively late to the game. I wonder if vehicles started to be retrofitted with them starting in 1988 or if it took a bit longer. It's also an open question which vehicle would have had priority (AMX-30B2, VAB-HOT, or AMX-10 VOA). You could make the case for any one of the three.

Here's the section on Thermal Imaging. Its an article on IR in general.

Prior to the sixties, the night vision capability of the French Forces was based on the near infra-red equipment, manufactured by TRT and SOPELEM. Such equipment used a very short part of the infra red spectrum, within the red limit of the eye sensitivity ,and the limit of the Si photocathodes. The scene was illuminated by a filtered light generated by an incandescent or xenon lamp. During the first years of the sixties, two new ways became possible for night vision: the image intensification (see figure 6) using the visible and near infra-red spectrum, and the thermal spectrum using MWIR (3 to 5 mm) or LWIR (8 to 12 mm). The second one was a really new concept because images became totally independent of the ambient illumination, but mainly dependent on the temperature contrast in the scene. The great interest of this new thermovision for defense applications became quickly obvious. But the conceptual and technological ways leading to operational equipment were very long! It was necessary to determine all the parameters of the future thermal imagers in order to obtain a useful image in the field spectral band, spectral limits, sensitivity, resolution, image frequency,... At that time, a French subsidiary of the PHILIPS Group: TRT received several contracts from French Official Services for manufacturing experimental thermal imagers. The two spectral bands were tested, but the MCT was only at the basic research level, and for LWIR the available detectors operated at liquid helium or liquid hydrogen temperatures. From 1965 on, several systems came into being by TRT such as LUTHER 1 (LUTHER meant LUnette THERmique "Thermal telescope") and several other imagers operating at a frame rate of one image per second, followed by LUTHER 2 in 1970, as the first high frame rate thermal imager to be developed (16 images per second) which matured into LUTHER 3 (in 1973) as the first serial scanning imager using a 30 element MCT detector. With a view to performing evaluations on board helicopters, the DGA awarded SAT a contract for the development of a Narrow Field of View (NFOV) imager and also placed an order with TRT for a Wide Field of View (WFOV) imager. Both thermal imagers were delivered in 1974. Meanwhile TRT had developed and sulied the first parallel serial scanning imagers: THERMIDOR 1, followed in 1975 by THERMIDOR 2. This period was also the one in which SAT technology made rapid advances: From 1958, studies conducted by the C.N.RS.( Centre National de la Recherche Scientifique) allowed for other detection possibilities to appear; which consisted in using a mercury telluride (HgTe) and cadmium telluride (CdTe) ternary alloy capable of operating at a temperature of only 77K instead of 20K like other detectors existing then. The first HgCdTe (or MCT = Mercury Cadmium Telluride) photodiodes attracted SATs attention who found in them the ideal material for applications in the 8 to 12 micron wavelength (thermal imaging, 10.6 micron lasers).Figure 7 show a MCT ingot and detector wafer made by SAT.Simultaneously, TRT carried on several research activities using CMT detectors provided by another company of the PHILIPS Group: MULLARD in UK. I)etailed studies were then launched under laboratory conditions by SAT in cooperation with the C.N.RS. Several preliminary development works confirmed that the crystal growth of Hg Cd Te wafers and detector process have been perfected
Figure 6: Light intensifier
Figure 7: MCT ingot and detector wafer
This technology gave rise to SAT imagers (1976,1977) which relied on parallel scanning and used MCT detector arrays of some hundred elements working in the 8 to 12 micron wave band, thus providing a very high thermal sensitivity. After this period of maturation, several simple ideas become apparent to lead toward the useful thermal imaging system: _The image must be displayed on a standard TV display without any complex standard conversion, -the scanning must be functionally as close as possible to the TV scanning (linear, monodirectional, synchronous, -the geometrical resolution (in terms of number of pixels per image) must be close to the TV resolution, -the thermal sensitivity of a tenth of degree was the target.

The experience gained by French manufacturers and users from the above presented thermal imager prototypes was substantial. However, by 1978, time had come for the French Authorities to determine the technical features required by this type of thermal imagers for use with the French Armed Forces. From 1979 on, TRT and SAT were given the responsibility for the joint development and production of the so-called SMT. The modules include the optomechanical scanner, the detector and his cooling system and the electronic parts. They deliver a full TV compatible video signal. Several configurations have been developed and delivered until now such as: the TANGO thermal imager for Atlantic 2 patrol aircraft, MURENE for integration on naval turrets, VICTOR for use on board GAZELLE helicopters equipped with HOT systems, CHLIO for helicopter board observation system, imagers for ATLIS airborne laser designation and RUBIS navigation pods, etc. The most important achievements concern thermal imagers for use on armored vehicles: CASTOR developed by TRT for AMX 30 B2 tanks, artillery observation armored vehicles (AMX 10 VOA) and the so-called VAB-HOT (armored vehicles for HOT). AThOS thermal imager developed by SAT specifically suitable for use with the gunsight of the high performance LECLERC tank (shooting white driving capability, accurate to within twenty centimeters from a distance of two kilometers). Modules of SMT thermal imagers have been mass-produced since 1988. About 2000 sets have been manufactured.
Click to expand...