One alternative, at $3.5 billion per year, eliminated NERVA and stopped production of Saturn V and Apollo spacecraft. This option, however, would maintain a vigorous program in piloted flight, featuring Skylab with three visits as well as six additional Apollo lunar missions. Better yet, such a budget would accommodate "Space Transportation System and Space Station module development with launch of both in 1979."

Two other options, at $2.5 billion, also permitted flight of Skylab with its three visits, along with the six Apollos. There could even be a space station in 1980, with Titan III-Gemini for logistics. However, there would be no space shuttle. NASA-Marshall would close, while activity at the Manned Spacecraft Center would fall substantially.

At $1.5 billion, the piloted space program would shut down entirely: "All manned space flight ceases with Apollo 14 in July 1970." Not only NASA-Marshall but the Manned Spacecraft Center would close, with the Saturn launch facilities at Cape Canaveral shutting down as well. Yet NASA would continue to maintain a vigorous program of automated space flight. Even at $1.5 billion, the agency could send six Viking landers to Mars, and could take advantage of a rare alignment of the outer planets to send spacecraft to Jupiter, Saturn, Uranus, Neptune, and Pluto. NASA would conduct "at least one planetary launch each year in the decade," and would pursue "a relatively ambitious science and applications program with 95 launches in the decade."


What effect would taking the $2.5 billion or $1.5 billion options have had on the US Space program to date had one of these been chosen?

What effect would taking the $2.5 billion or $1.5 billion options have had on the US Space program to date had one of these been chosen?
Click to expand...

a simple one: after money is spent cheep running NASA
is no more money left for Apollo Mission flight or development of new hardware! 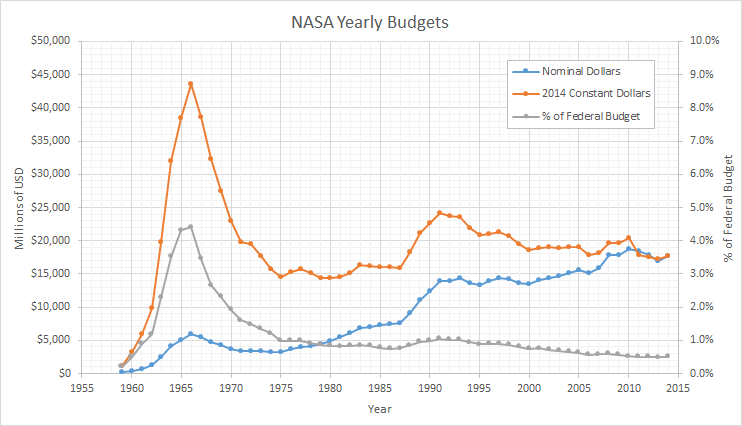 Just came across this over on Wired.com: On the Moons of Mighty Jupiter (1970)

In January 1970, M. J. Price and D. J. Spadoni, engineers with the Chicago-based Illinois Institute of Technology Research Institute (IITRI), completed a feasibility study of soft-lander missions to Io, Europa, Ganymede, and Callisto for the NASA Headquarters Office of Space Science and Applications (OSSA) Planetary Programs Division. Their study was one of nearly 100 “Long Range Planning Studies for Solar System Exploration” IITRI performed for NASA OSSA beginning in March 1963. Price and Spadoni discussed the scientific merits of landings on the worlds Galileo had discovered, but their study mainly emphasized propulsion systems for reaching them.


....For mission phase one, Earth launch, Price and Spadoni assumed the existence of three launch vehicles. These were, in order of least-to-greatest capability, the Titan IIIF, the Saturn INT-20, and the Saturn V. The first two were hypothetical. A liquid-propellant Centaur upper stage could augment all three rockets.

Another interesting proposal was the Destination Mankind mission, basically, Apollo 17 delayed until 1976, with a new goal, a high geosynchronous orbit at 22,300 miles out.

In May 1972, Krafft Ehricke, Executive Advisor in the Space Division of North American Rockwell Corporation, proposed that Apollo 17, scheduled for the end of 1972, be postponed until the U.S. Bicentennial in 1976 and dispatched to a new destination: a geosynchronous orbit (GSO) 22,300 miles above the Earth. An object in a GSO requires one day to complete one revolution of the Earth. Since Earth revolves in one day, an object in equatorial GSO appears to hang over one spot on the equator.

“The mission into geosynchronous orbit,” Ehricke wrote, would provide “additional return on America’s investment in Apollo” by dramatizing “the usefulness of manned orbital activities.” He added that his proposal, which he dubbed Destination Mankind, “would inspire many, as did the lunar missions before it, but in a different, perhaps more direct manner, because of its greater relevance to some of the most pressing problems of our time.”
Click to expand...

PMN1 said:
What effect would taking the $2.5 billion or $1.5 billion options have had on the US Space program to date had one of these been chosen?
Click to expand...

How many angels fit on a pinhead?

The latest installment in David S. F. Portree's 'Beyond Apollo' series over on Wired.com:

How could the Nixon Administration or NASA have kept public enthusiasm, and the required political support, for the space program after winning the race to the moon with the Soviet Union?
A

Hmm, well, besides going to Mars... finding life there (Viking anybody ?).. or making contact with aliens...
at NASA many recognized that whatever program coming after Apollo would look anticlimatic.
In 1977, for example, Gordon Fullerton

Acknowledging the declining public interest in space, Fullerton noted that, after Apollo, "Everything else has to be anticlimactic." (Today, Apr 4/77, 1 A
Click to expand...

from astronautics and aeronautics, 1977 - (a day-to-day, year-by-year compilations of events at NASA, a minegold of informations).

Perhaps a more "balanced" program than the space shuttle alone could have been funded instead - but a Soyuz / Mir - look alike would not have been that much enthusiasting.

I tend to think - in 1968, real-worl Apollo 8 matched fictional 2001 quite well.
A decade later, renewed science-fiction (Star Wars) roamed galaxies far away - while NASA was stuck to the ground...

The Apollo-Soyuz Test Project (ASTP) had its origins in talks aimed at developing a common U.S./Soviet docking system for space rescue. The concept of a common docking system was first put forward in 1970; it was assumed, however, that the docking system would be developed for future spacecraft, not the U.S. Apollo and Soviet Soyuz in operation at the time. A joint U.S.-Soviet space mission served the political aims of both countries, however, so the concept of a near-term docking mission rapidly gained momentum. In May 1972, at the superpower summit meeting held in Moscow, President Richard Nixon and Premier Alexei Kosygin signed an agreement calling for an Apollo-Soyuz docking in July 1975.

NASA and its contractors studied ways of expanding upon ASTP even before it was formally approved; in April 1972, for example, McDonnell Douglas proposed a Skylab-Salyut international space laboratory. In early 1974, the Flight Operations Directorate (FOD) at NASA’s Johnson Space Center (JSC) in Houston, Texas, examined whether a second ASTP mission might be feasible in 1977. The 1977 ASTP proposal aimed to fill the expected three-to-four-year gap in U.S. manned space missions between the 1975 ASTP mission and the first Space Shuttle flight.

The brief in-house study focused on mission requirements for which JSC had direct responsibility. FOD assumed that Apollo CSM-119 would serve as the prime 1977 ASTP spacecraft, and that the U.S. would again provide the Docking Module (DM) for linking the Apollo CSM with the Soyuz spacecraft. CSM-119 had been configured as the five-seat Skylab rescue CSM; work to modify it to serve as the 1975 ASTP backup spacecraft began as FOD conducted its study, soon after the third and final Skylab crew returned to Earth in February 1974. FOD suggested that, if a backup CSM were deemed necessary for the 1977 ASTP mission, then the incomplete CSM-115 spacecraft should get the job. CSM-115, which resided in storage in California, had been tapped originally for the cancelled Apollo 19 moon landing mission.
Click to expand...

The Soviet build five ASTP Soyuz. Two were expanded in unmanned test flights; a third flew manned before ASTP in 1974; and the ASTP vehicle itself had a backup.
The backup Soyuz was good for nothing because the APAS docking system was unique and not present on the Salyut space stations. It was ultimately flown as Soyuz 22 in October 1976 in a a fly-alone Earth orbit survey mission carrying a powerful mutispectral camera instead of the docking system.